5 Possible Settings for a Third Wizarding World of Harry Potter 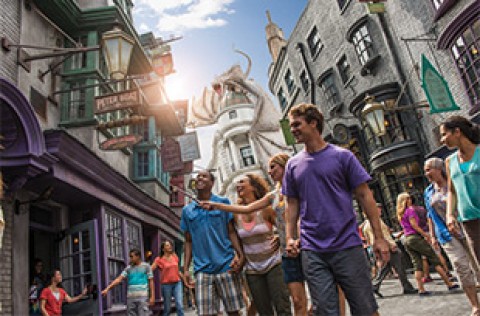 With the announcement the Universal is looking into buying a major chunk of land near Universal Blvd., it is speculated that at least part of this land will turn into a third Universal Orlando Resort theme park.  Although Universal holds the rights to many franchises and popular brands, its most successful acquisition was the theme park rights to the Harry Potter universe.

Universal has already created two lands, Hogsmeade and Diagon Alley, based on the locations found in the series, both of which brought in millions of dollars and fans from across the globe.  Naturally, it makes sense that they would at least consider building a third Wizarding World if they were to build a third park.  But what could they build that would convince visitors to buy a third theme park ticket or a park-to-park pass?  What other location in the Harry Potter series would be suitable for a family-friendly theme park, with attractions, restaurants, and shops?

The setting:  The Burrow, for those who are unfamiliar, is the home of Harry's best friend Ron Weasley and his family.  Harry visits the Burrow in four of the books and movies, often spending long portions of his summer holiday.  The Burrow becomes an important part of the series in the last two books as it becomes the headquarters of the Order of the Phoenix after Sirius Black's house, number 12, Grimmauld Place is thought to lose some of its magical protections.  The Burrow is usually known for being a peaceful and happy place where Harry and the Weasleys are free to play Quidditch and spend quality time together.  It even hosts Bill and Fleur Weasley's wedding in the seventh book and movie.  However, it's not immune from the bad times, as it was attacked and burned down in a much fan-hated scene the Harry Potter and the Half Blood Prince film, a scene not in the book.

The themed land:  In the sense of the already established Wizarding World lands, the Burrow would make sense as a third land.  It is located outside a small, fictional village in Devon, England, nowhere near London or Hogwarts.  It would probably also produce a popular restaurant, since Molly Weasley's cooking is noted to be excellent.  Exploring the Burrow could also be fun, since it's described as having many floors that seem to be held together by magic.  In fact, the house itself could be an attraction similar to the Swiss Family Treehouse in Disney World or Tarzan's Treehouse in Disneyland.  To make the atmosphere more festive, the area could still be decorated for the wedding.  And for shopping, who hasn't wanted a homemade Weasley Christmas sweater?  All together, the area may not be the most exciting or action packed, but it would still attract tons of die-hard fans, plus maybe families who are looking for a more child-friendly Harry Potter attraction.

2.  The Ministry of Magic 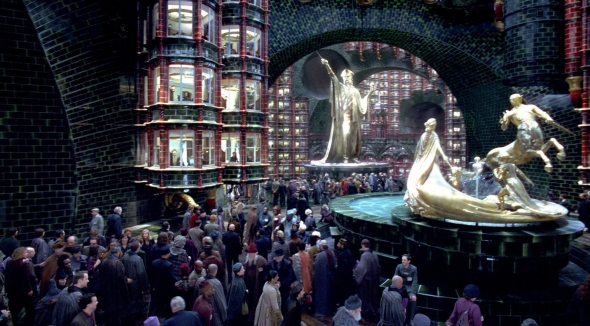 The setting: The Ministry of Magic (the British Wizarding government building) is scene prominently in two of the Harry Potter books and films.  In Harry Potter and the Order of the Phoenix, Harry must first go to the Ministry for a trial in which he is being charged of illegally using magic in front of a Muggle.  Throughout the book he has visions of a locked door in the building and finally has a vision that his godfather, Sirius Black, is being held there against his will by Voldemort.  Harry and his friends race there, only to find that Sirius was never there and it was a trap.  There is a large battle between the teenagers and the Death Eaters (Voldemort's followers), and eventually the Order of the Phoenix.  The battle is climatic, but unfortunately Sirius is killed.  Two years later in Harry Potter and the Deathly Hallows, Harry, Ron, and Hermione return to the Ministry undercover to search and steal one of Voldemort's horcruxes, which also results in a dramatic battle and escape.

The themed land: While the Ministry of Magic is located in London, it is not located near Diagon Alley.  As the setting of so many action-packed scenes, it would make sense for there to be a ride based on a battle from either film.  The challenge in this case would be to bring back the actors, especially the "child" actors who are now adults.  A ride based on Order of the Phoenix may also be a sore spot for fans, considering Sirius Black was a fan-favorite and his death is still considered one of the worst losses in the series.  There has never been any mentions of a shop or restaurant in the Ministry, although it probably wouldn't be unthinkable to have an employee cafeteria in the building, serving quick meals for the busy Ministry workers.  While Harry may not have spent much time in the Ministry in the series, it is certainly an iconic place in the series and would probably have at least some fan appeal.