The Secret History Behind Walt Disney World's Most Famous Icons 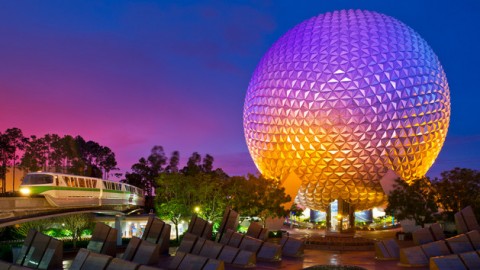 When you think about Walt Disney World, what are the first thoughts that enter your mind? Do you reminisce about walking down Main Street for the first time, seeing Cinderella Castle perfectly centered ahead of you? How about walking into Space Mountain for the first time? What about the other legendary man-made mountains at Splash Mountain and Big Thunder Mountain? Do you remember that moment you were swept away by the majesty of Spaceship Earth at Epcot?

Yes, the scenery at Walt Disney World is an integral part of its appeal. The four parks claim a stunning number of architectural triumphs. Disney Imagineers have frequently done the ultimate; they have built something from nothing. So many of their achievements are unforgettable. They are also engineering marvels so impressive that college students research them for school papers. Have you ever wondered what was involved in getting them off the ground?

The short answer is millions of pounds of steel and other raw materials. The long answer involves a diehard bunch of specially trained engineers with a can-do spirit and the boldness to succeed in ventures others wouldn’t even have thought to try. That’s the power of Imagineering. Of course, even Disney Imagineers face unpleasant realities such as budget constraints. That was particularly true during the early days of Walt Disney World, when building one right regularly meant sacrificing another as the opportunity cost.

Countless landmarks at Walt Disney World are worthy of examination. Walt Disney’s laser-focus on architectural design was something he passed down to all his disciples, allowing his legacy to last half a century beyond his death and counting. Still, some of the achievements are greater than others. Let’s take a closer look at the construction of several of the most awe-inspiring monuments at Walt Disney World, learning about all the struggles Disney employees faced in creating something from nothing. 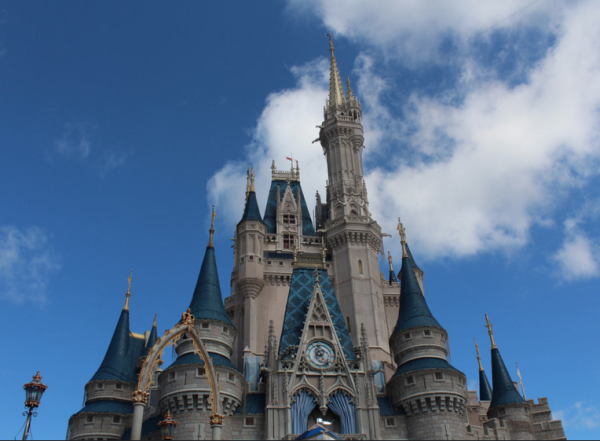 No other landmark in the world is as inexorably linked to its theme park as Cinderella Castle is to Magic Kingdom. Cinderella Castle is a 189-feet tall building including its watery moat. Its size is specific. Disney gained a lot of influence with the state of Florida during the building of the park, but they couldn’t avoid FAA regulations involving structures in excess of 200 feet. Had Cinderella Castle stood that tall, government officials would have required Disney to add flashing warning lights for low-flying aircrafts. Imagineers weren’t going to do that, of course.

While Disneyland fans in Anaheim, California, maintain that Sleeping Beauty Castle is the original theme park castle and thereby the greatest, Walt Disney World park planners accounted for this thought process. During the crafting of the blueprints for Cinderella Castle, everyone involved understood the stakes. In order to branch out from Disney as a single theme park, they’d have to overcome the perception that the Florida park was derivative. The best way to achieve that goal was obvious. They’d have to make everything at Magic Kingdom bigger and better. When it came time to design the castle, they took that literally. 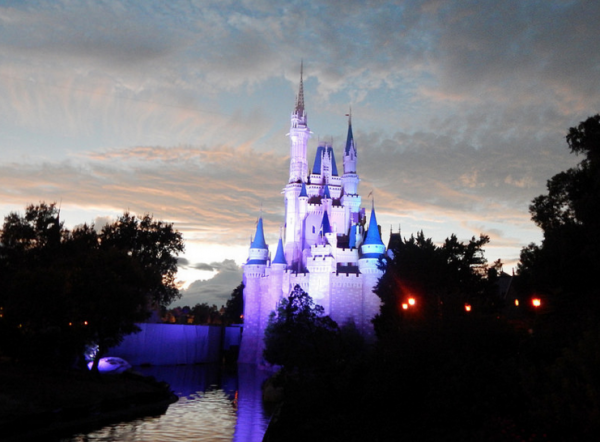 Cinderella Castle is more than 100 feet taller than Sleeping Beauty Castle, but hanks to the magic of forced perspective, it even seems bigger than that. People walking down Main Street may not even recognize that it’s happening, but the castle will grow larger as they approach it. However, the castle will also seem thinner, since that’s how Imagineers intended the optical illusion of a regal skyscraper to work. Guests should always feel small in the presence of Cinderella Castle.

Bringing their planned landmark to fruition wasn’t easy.  If we exclude the infamous land purchases that Walt Disney managed to sneak under the noses of Florida real estate magnates, the company invested $4.7 million into the construction of Cinderella Castle, not including decorating the interior. You can look at that investment expense as a lot or a little. In 2015 dollars, that’s $28.7 million. So, the castle cost less than Alex Rodriguez receives to play for the New York Yankees. The $4.7 million is also only a fraction of the overall cost to build Magic Kingdom. The total bill for the park was $400 million, which means Cinderella Castle is only one percent of the overall financial outlay. That’s not too bad for a royal dwelling. 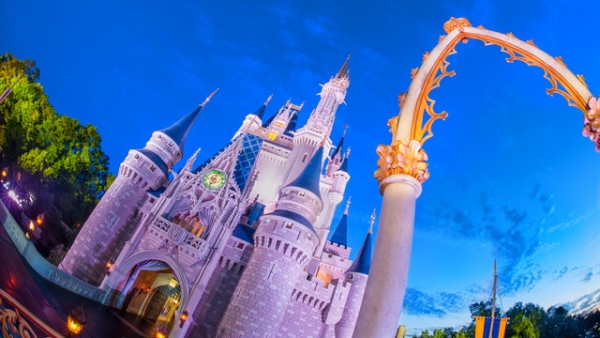 The primary concern with building Cinderella Castle was the timeframe. Once Disney execs finished the blueprints, they were only 22 months away from the debut of the park. It would have been unforgivable for the central view of Main Street to remain under construction after the park had opened. The struggle everyone faced is that they broke ground on Walt Disney World in 1967. The new landmark was way behind some of the other projects.

Construction employees worked under a tight deadline to build the landmark. To their credit, they actually finished earlier than projected. Walt Disney World’s Magic Kingdom opened its gates for the first time on October 1, 1971. Despite breaking ground only 18 months prior, the project came together quickly. That’s the benefit of great planning. It also helps that the backbone of Cinderella Castle is fabricated metal rather than brick, which is slower to set.

Six hundred tons of steel comprise the central spine of the castle. In order to secure it during hurricane season, there’s also a reinforced concrete buttress that surrounds all the integral parts of the structure. Due to its cleverly engineered core, Cinderella Castle can withstand 110 mile per hour winds, and architects believe it could even go quite a bit beyond that if needed.

Castle in the sky 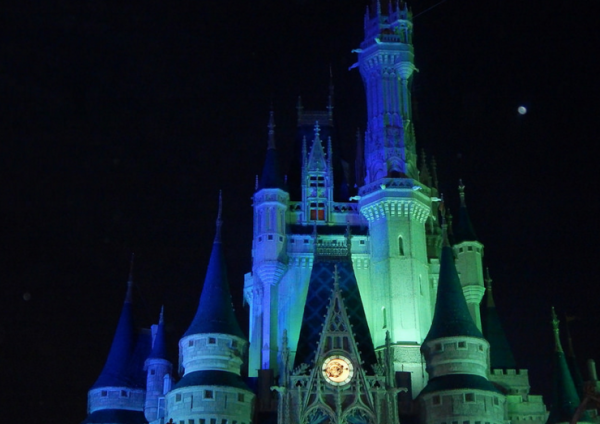 Now that the architecture lecture is over, let’s talk about the fun stuff. Imagineers modeled Cinderella Castle after several great palaces, fictional and real. Herbert Ryman earned the right to construct the facility. He won rave reviews for his work in bringing Sleeping Beauty Castle into existence, so when Disney started to design their second theme park, he was the perfect choice.

Ryman chose some of the most beautiful buildings in the world as models. Those include Versailles and Fontainebleau in France as well as Moszna Castle in Poland. He also mimicked some of the ideas from famous chateaus such as Chambord, Chaumont, and Pierrefonds. The most lasting impression, however, came from the castle animated in Cinderella, as it should be. 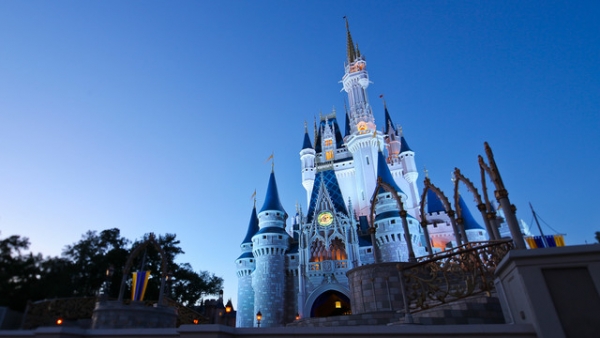 In order to perfect this look, Ryman requested ornamental accoutrements such as turrets and spires to emphasize the royal nature of the castle. To create the unusual look, he planned for Cinderella Castle to feature 29 towers. Alas, two of those had to be scrapped because other plans involving the Fantasyland section of the park completely obstructed their view. For that reason, there are now 27 towers strangely numbered from 1-29. The two numbers for which there isn’t a matching tower are 13 and 17.

Three of the most memorable towers are 10, 20, and 23. 10 features the famous clock, while 20 is the tallest of the group. 23 is the unforgettable gold roof that you probably have appreciated in some of your favorite Walt Disney World pictures. Since the castle is supposed to be a place of tremendous romance, there’s also a wishing well and bushes that Disney cuts specifically to emphasize that love is always in the air at Cinderella Castle. The romance is painted on the walls, too. The five murals in the castle archway reveal the love affair between Cinderella and Prince Charming.

There is one odd tidbit about Cinderella Castle. Disney emphasized authenticity from start to finish, even employing gold paint to enhance the regal perception of the structure. There was one aspect of Sleeping Beauty Castle that they couldn’t translate to Walt Disney World, though. The drawbridge at Disneyland is functional. Disney has raised it exactly twice. The first time was for the park’s grand opening, while the most recent instance occurred in 1983 when the company rededicated Fantasyland. By 1970, Imagineers understood that there was no point in designing a functional moat after Disney had opened its predecessor exactly once in 15 years. So, the drawbridge at Cinderella Castle is only for show. When the zombie apocalypse comes, you’ve been warned not to try to use it for safety.

Despite the storied history of Cinderella Castle, Disney isn’t afraid to alter the look of its signature landmark, either. In 2015, the company updated the Central Plaza area with new gardens and pathways as well as a special viewing spot for Wishes. Since that show and Cinderella Castle are tethered together, Disney updated the castle with four new turrets that expand this grand icon's footprint even farther into the Magic Kingdom's central hub area.

What surprises me is how quickly the new attractions were constructed (after finally deciding, of course). We are now looking at 3+ years before Pandora is open to the public, and its likely Star Wars land won't be open for another 4 years. I know these are themed areas and not just a single attraction, but I would think advancements in construction technology would speed things up a bit.