All of These Things are Banned from Disney Theme Parks 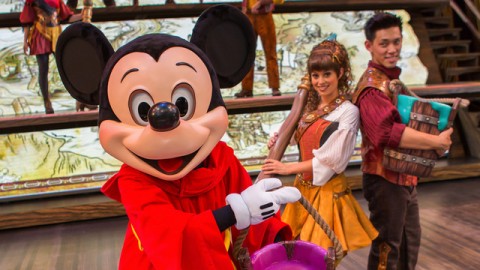 You know how Adam and Eve felt after that unfortunate episode with the apple. You can see the Happiest Place on Earth, but you can’t go in. You’ve been banned, kicked out of paradise. It’s the worst thing that can happen to a theme park tourist.

Even if you didn’t realize it, Disney does have rules about park behavior. Violating some of these rules is enough to guarantee you get not only removed from the park for the day but in some cases banned forever. This may seem harsh to some, but try to think of it from The Walt Disney Company’s perspective.

Over 134 million people visit their theme parks each year. That’s a larger number of people than live in Japan. If Disney didn’t enforce their rules for tolerable park behavior, well, nobody would ever call Disneyland the Happiest Place on Earth again.

Disney parks function as melting pots for all the world’s travelers. On a given day, guests from dozens of countries visit Disney’s establishments. Each of these groups of people has their own customs and behavior. Some of them are a bit unusual to others.  In order to maximize the enjoyment of as many people as possible, Disney tries to police with a light touch, but if they turned a blind eye to the most annoying guest behavior, anarchy would ensue.

Rather than allow their parks to fall into chaos, Disney park analysts watch carefully to determine which guest practices are acceptable and which ones either annoy or endanger other visitors. There’s a legal element to this as well. If something goes wrong at a Disney theme park, the company is responsible. Time Magazine reported 30 years ago that Disney faces approximately 100 lawsuits each year, and the country has only become more litigious since then. That’s why Disney has to spend so much time and financial consideration on park safety. 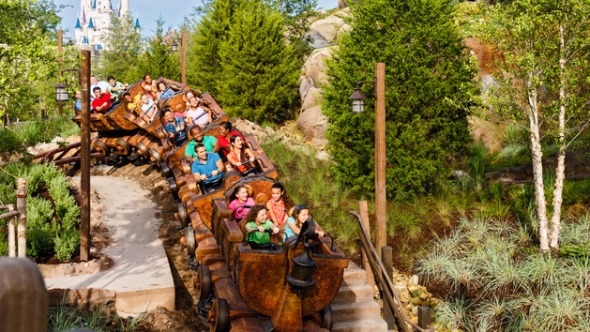 Even in Florida where the company deals with less governmental oversight due to deals that Walt Disney made when he bought the land, incidents still occur. In 2001, the Florida legislature requested that the company report major injuries and deaths each year. Wikipedia actually collates a list of them if you’re interested. Without thoughtful rules in place to increase park safety, this list would be exponentially longer.

Given the above, it’s understandable why Disney bans so many dangerous practices at their amusement parks. Any behavior that threatens others poses risks to the company in terms of legal fees, guest compensation, and public relations woes. In the social media era, the last of those three is the gravest concern. Issues at parks that were historically local stories kept out of the national media now trend in a matter of moments.

Now that you understand why park rules are so important, it’s time to learn about all the banned items and behaviors at Disney amusement parks. Some of what follows may shock you, but you’ll shake your head in approval at many of Disney’s decisions. They didn’t become the dominant force in the theme park industry by accident. Their meticulous research into acceptable behavior is the gold standard across the business world. 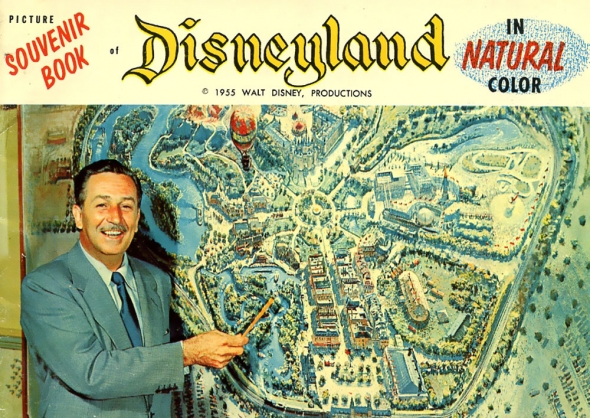 When Disneyland debuted in 1955, Americans lived in an entirely different culture. The social revolution of the 1960s was still a few years away. A post-World War II mentality dominated all phases of society. The country’s leaders expected civilians to act in a certain way, and many of those beliefs passed down into the business industry.

Walt Disney, who was an ardent supporter of the war effort, felt trapped by societal conventions. As an artist, he interacted with many creatives whose individuality was the source of their greatness. He didn’t like the idea of telling his friends to behave differently, but he was also a harsh task master like so many perfectionists are. His vision for Disneyland was precise, and that meant he expected employees as well as guests to look and act a certain way. 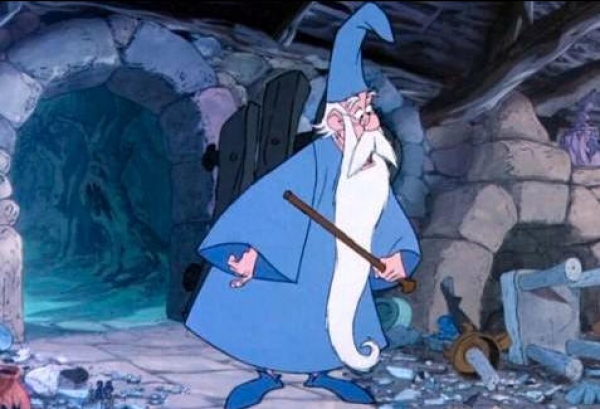 When Uncle Walt hired employees for the park opening, some of them experienced shock when they received the criteria for public appearances. The best way to describe it is that Disney himself must have hated hair, at least on men. He banned any kind of facial hair for male cast members. He deemed mustaches, beards, and goatees unprofessional, and his idealized vision of Disneyland would include clean shaven workers with smiles on their faces. He wanted his park to seem wholesome, and shaggy-looking employees wouldn’t provide that atmosphere.

Long hair is for women! 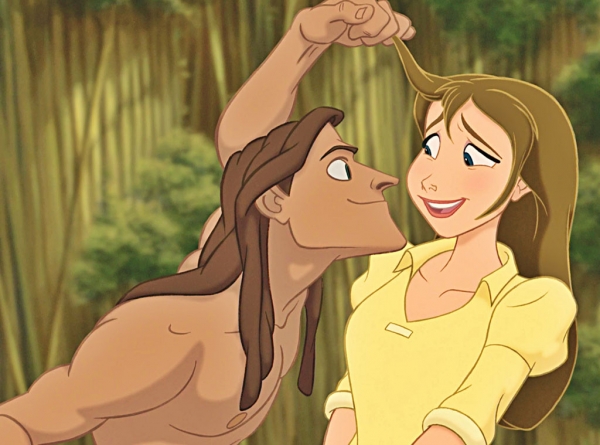 Similarly, Disney wasn’t a fan of long-haired hippies. In this regard, it’s a good thing he died a few years ahead of Woodstock, because the sight of Jimi Hendrix onstage might have killed him. Disney loathed the idea of men wearing long hair. This may seem crazy now, but the perception in the 1950s was that any guy with extended locks was a beatnik. A beatnik was a commie-loving poet. And Walt Disney was not about to let the park of his dreams get overrun by bongo-playing hippies.

The dress code, well, hair code didn’t solely apply to employees, either. Any long-haired man who tried to enter Disneyland in its early days didn’t get to go inside. Instead, a cast member informed them that they failed to meet the park dress code. This became especially problematic in 1964 when an ascendant band from Britain invaded America. The Beatles had a revolutionary sound and even more original hair. Any man who mimicked their look would find out that Disneyland wasn’t a fan of the mop top. 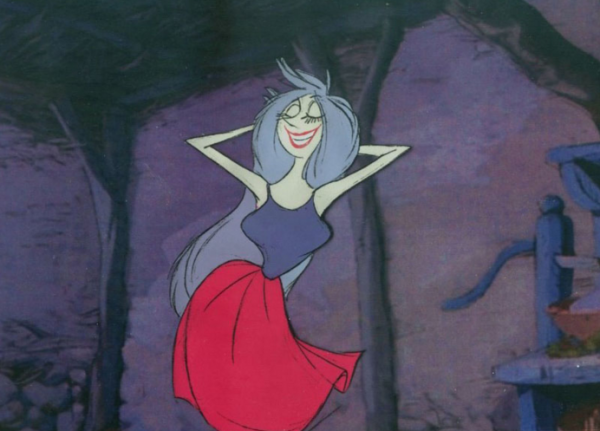 Women also had to live up to the Donna Reed Show expectations of the 1950s. Cast members didn’t use rulers to measure how far above the knee skirts were, but they still employed guidelines for appropriate dress. Any lady in a halter top found herself publicly shamed if she tried to enter the Happiest Place on Earth. Such a free-flowing bosom didn’t fit well with the family image Disney wanted to display in its early days.

Protestors have their day 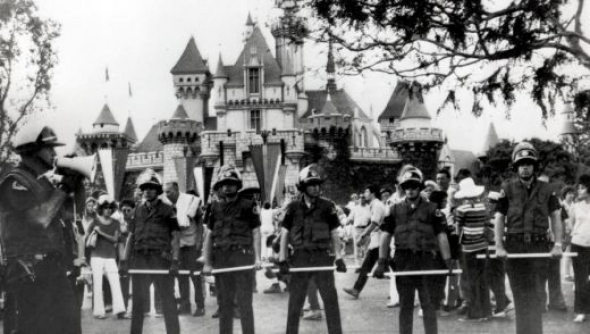 To punctuate the absurdity of the situation, the hippies actually got their revenge on Disneyland in 1970. In violation of established park rules, a group of 300 protestors legally gained admission to the park. While there, they protested its long-standing practices by staging a protest at Tom Sawyer Island. They even hoisted a Viet Cong flag.

Park officials had no idea how to respond to such an unprecedented event. They called the Orange County Police, who overreacted completely by arriving clad in riot gear. They arrested 18 of the protestors that day, and Disneyland gave the them the ultimate demerit for their behavior. They didn’t receive rain checks to return for free on another day. Then again, the demonstrators also walked away with a victory: It was the first time in the history of Disneyland that the park closed early due to a guest incident. 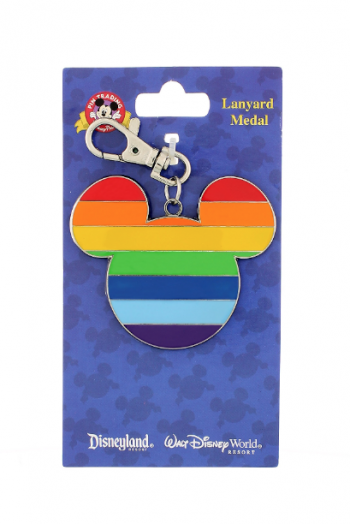 Today, The Walt Disney Company is one of the best employers for the gay and lesbian community. Starting in 1991, fans organized Gay Days at their parks that have become an annual tradition. While the company doesn't officially sanction the event, they continue to be the gold standard in the equal treatment of all employees and guests.

In 2014, Disney even stopped their donations to the Boy Scouts of America, a charitable act that had gone on for decades, because the company refused to allow gay men to become scout leaders. They also were one of the first major American corporations to provide health benefits to same-sex partners. They’ve even signed court documents expressing ardent company support for same-sex marriage.

However, in the 1950s, their position was not as inclusive. During the early days of rules creation, the company took a hard look at potential practices at Disneyland. Dancing was a hot button topic at the time – don’t laugh – because it was considered a gateway activity to people having sex. Disney crafted a series of rules about appropriate behavior at a family-friendly park. While authorizing dancing in 1957, they decided to exclude same-sex couples. Ostensibly, it was to enact “crowd-control measure(s)” to protect women. In reality, it was a decision to exclude gay people from dancing since such an action might make other guests uncomfortable.

Even though a couple of early Disney Imagineers including Disney Legend Bob Gurr were homosexual, his employer did what they felt was best for a family-friendly park. The rule remained in effect until Disney experienced some embarrassment with a lawsuit in the early 1980s. They eliminated the rule for good in 1985. It’s to the credit of The Walt Disney Company that 41 years later, they had come so far with their policies. Actively encouraging the gay and lesbian community to visit the park by offering Gay Days doesn’t make up for the historical slight, but The Walt Disney Company is clearly passionate about treating all their employees equally today.

Re: Watch your language. I have gotten a laugh quite a few times on the parking lot trams when they pull up to the entry gates. Sometimes there will be cast member with a quick wit (or is it part of the spiel now?) will remark, "Please lower your heads and watch your step. If you fail to do so, please lower your voice and watch your language!" That kind of snarky humor is right up my alley!

Disney does not "offer gay days"

It is a unofficial event.

yes, and it says such in the article