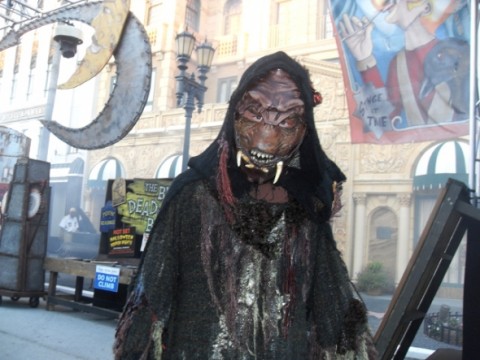 As summer gives way to fall, many people’s thoughts turn to sweaters, pumpkin spiced lattes, and changing colors in the leaves. Yet in Central Florida, where it will be hot and muggy until at least November and the leaves never do change, the air is buzzing with anticipation - not of anything weather related, but of thrills and chills and things that go bump in the night.

Though it is six weeks before Halloween, Universal Orlando kicks off its Halloween Horror Nights event in mid-September. Each year's event is a new terror, filled with blood, gore, and the screams of victims. Clearly, this is not just another Halloween event. 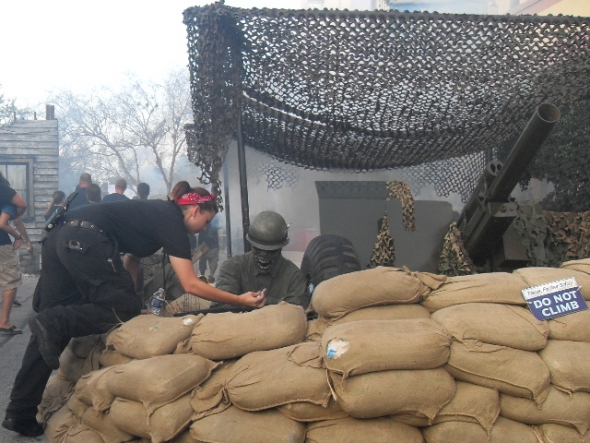 However, have you ever given any thought to the people behind the event? It takes a top-notch team of tremendously talented designers, costume specialists, set builders, painters, lighting and sound technicians and makeup artists to turn Halloween Horror Nights into a reality. But for most guests, it is the scareactors who truly bring the frights to life. With impeccable timing and a twisted love of the macabre, hundreds of men and women fill the haunted houses and street scare zones, all ready to make you scream. How did they get where they are, and what is their life like for 30 glorious nights every fall? 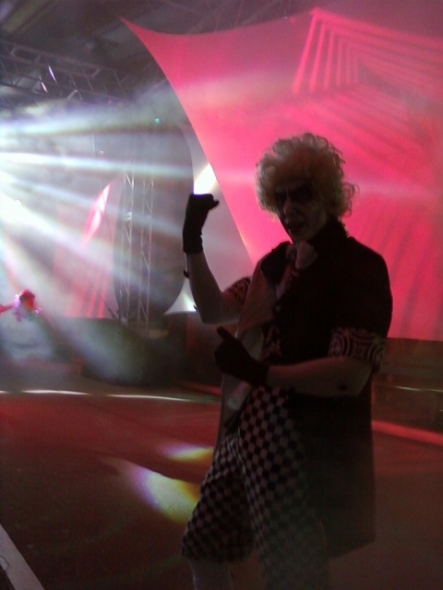 It all begins in mid-summer, typically during the month of July. While most people are enjoying backyard barbecues or trying not to melt in Central Florida’s legendary heat, would-be scareactors gather at Universal Orlando’s Human Resources building. Tall, short, heavyset, thin, disabled, it really does not matter who you are or what you look like—although, of course, your physical type helps to determine where you will be placed. What truly matters is whether you can do the job.

At one time, scareactors were expected to already know the art of the scare. During the 1990s, a common audition task was to try to scare the audition panel. Today, however, Universal has scareactor training down to a science. Previous experience is not necessary (though returnees from previous years do get preference). All that matters is whether you have the energy and the boldness to pull it off.

After filling out forms and submitting your headshot and resume (not required, but highly recommended), you will wait in a big group. Auditioners are called into another room in somewhat smaller groups. There you will face a panel of three or four Entertainment department performance coaches and directors.

Exactly what happens next varies by year and even by night. During my audition, I was instructed to cross the audition room floor—acting like a monkey the entire time! I don’t know how realistic my monkey performance was, but that isn’t the point. The point is to prove that you are not afraid to take risks. Make it big, make it bold, and play to the back of the room. 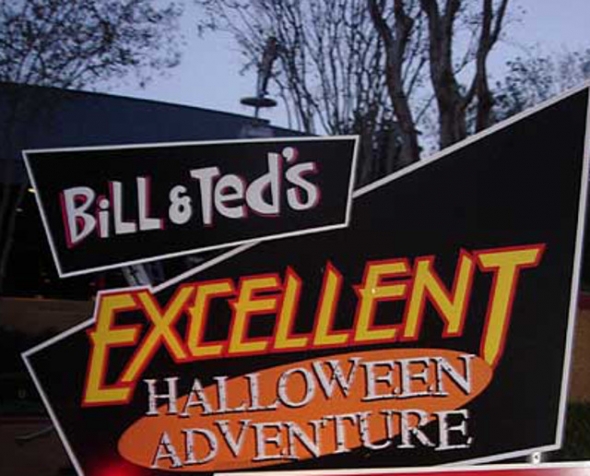 If you want a specialized role, such as stilt walking or a coveted spot in Bill and Ted’s Excellent Halloween Adventure, you will attend a separate audition with more complicated and specific tasks. But for the scareactors that fill the haunted houses and street scare zones, that’s it. You have just a few seconds to prove you deserve to be there.

Universal holds multiple auditions, but does not hold back roles. Scareactors are hired on the spot. So those who attend the earliest auditions have the best chances to be cast. If you get the job, you will fill out some paperwork and schedule your orientation class. What you won’t know, however, is exactly what your role will be. 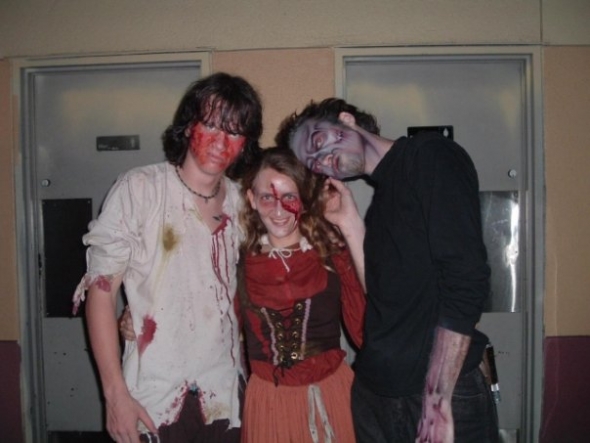 Everyone who is hired at Universal Orlando is required to go through company orientation. This is normally an all-day class similar to Disney’s Traditions, in which new team members learn a great deal about the history of the company and how they fit into the overall picture. Things such as appearance guidelines and how to interact with guests are covered extensively.

For scareactors, though, things are a bit different. The appearance guidelines are out the window—tattoos, scruffy facial hair, and unnatural hair colors are not only just fine, but can actually add to your character. And guest interactions focus on making them scream in terror, not explaining where the nearest bathroom is.

So scareactor orientation is only a few hours, and tends to stick to such basics as how to sign up for direct deposit and how to contact human resources if you have any problems. When my dad was a scareactor in 1996, his trainer actually took the orientation manual and threw it aside, saying, “This is Halloween Horror Nights. The rules don’t apply.” That doesn’t seem to be done anymore, but the sentiment is the same. Being a scareactor is unlike any other theme park job.

Sometime in mid to late August, you will receive a phone call from your stage manager. This is when you find out your work location and role—the name of your haunted house or scare zone, and which general character you will portray (which might be something like Zombie #5 or Plague Victim #3). You will also find out when and where training takes place.

Training is a one-night experience that throws a lot at you fast and furiously. You will meet your SM (stage manager), ASM (assistant stage manager), and performance coach/director, as well as the rest of your cast. You’ll be assigned to Cast A or Cast B (more on that later), and sit down for a roundtable discussion of the storyline behind your location and the characters who inhabit it. You will also get details on call times (what time you have to show up each night), opening times (what time your area opens to the public each night), makeup and costume information, and directions to your break area. 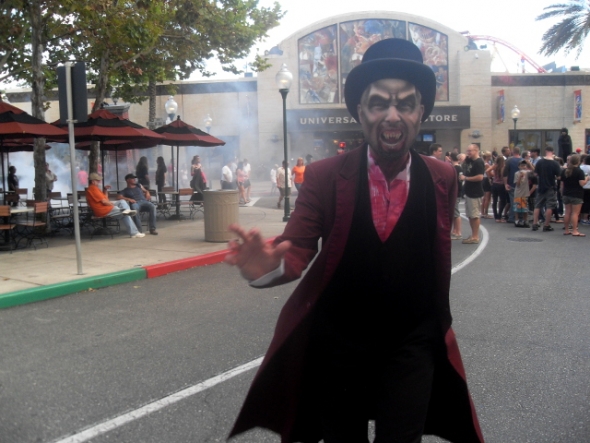 When the informational part of the evening is over, you will tour your location as a group, with your SM, ASM, and performance coach throwing out all kinds of detailed information. Those working in haunted houses will also be preliminarily “set,” or placed in a specific location within the house. Don’t get too comfortable, though, as things get mixed up all the time as the event evolves and everyone grows into their characters.

After the location tour, it is time for training to begin. This is basically a large group improv class, in which you will learn to use your body and surroundings in new and terrifying ways. My class spread out around the backstage area behind our haunted house, crawling and lurching as zombies while our performance coach pushed us to take more and more risks. 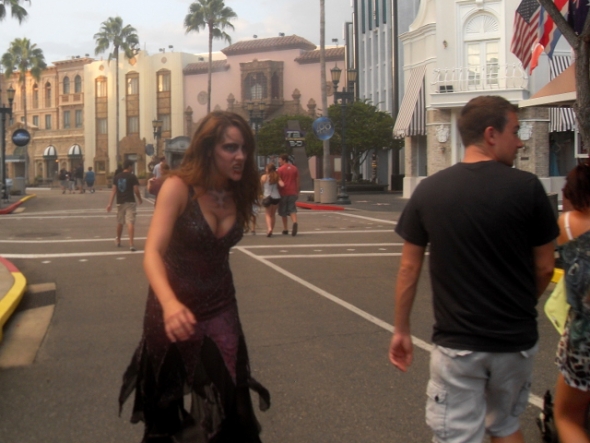 You will also learn techniques for keeping yourself and guests safe, such as “Scare and Be Aware,” or “Boo and Skiddoo.” The idea is to keep something (a wall, a prop, a piece of scenery) between yourself and the guests whenever possible. When this is not practical, know your exit routes. Never let yourself get stuck between guests without a way out, and never trap guests in a situation with no escape. Make the scare and then back off quickly, as most injuries occur during ongoing pursuits of a single victim—er, guest. Your team will also go over other important safety tips like what to do if a guest gets hurt or passes out, what to do if you get hurt, and how to report guests who cause trouble.

Finally, you will visit the costume and makeup area—a huge, cavernous warehouse space where all the scareactors get ready each night. You will try on costume pieces and have any last minute alterations done, learn how to find your costumes on the massive racks each night, and learn the makeup procedure. Though you won’t actually be made up that night, you will discover whether you get airbrushing, prosthetics, traditional makeup, or a mask, and where to line up each night for your transformation.