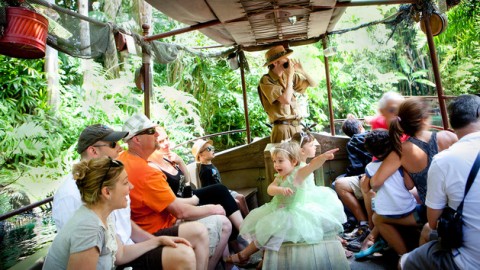 In April of 1998, the Walt Disney Company opened an entire park full of animals: Disney's Animal Kingdom. But it was by no means the original. That honor went to an Adventureland attraction that barely made sense even when it debuted. People loved it anyway.

You of course know this ride as the Jungle Cruise, which has entertained theme park tourists since its inception. That means it began all the way back on July 17, 1955, the storied day that marked the birth of Disneyland. Over the course of 60 years, the jokes haven’t gotten any better, but the Jungle Cruise maintained lasting appeal anyway. This begs the question of how such a quirky and seemingly non-Disney attraction came into existence and what machinations occurred to sustain it for six decades and counting.

“True story. I would never lie to you.” 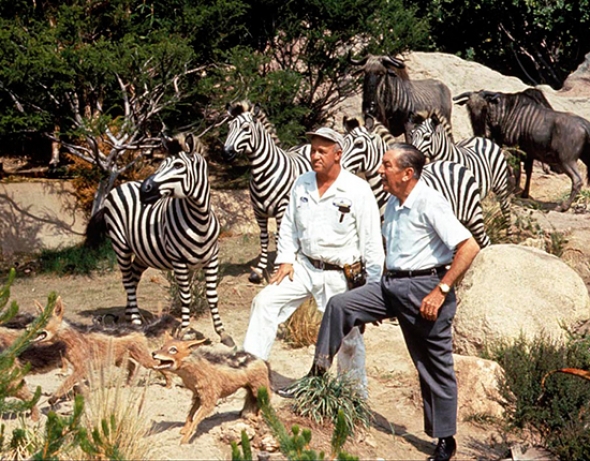 When Walt Disney and his vaunted team of Imagineers planned their first theme park, Disneyland, they compiled a group of potential attractions. Not all of these ideas ever entered the development phase for various reasons. Some were too ambitious even for the staff at Disney to bring to life. Others carried too hefty a price tag during a time when Walt Disney was investing every dollar he had to fulfill his dream of an amusement park. Conversely, some ideas that he championed didn’t make a great deal of sense to his own employees, a group of people who were devoutly loyal to their leader. Jungle Cruise skews toward this side of the issue.

In the early days of planning, park planners had the grandiose ambition to build several separate lands. Each of them would seem so realistic that visitors would feel swept away into an entirely different realm. Hubs such as Fantasyland and Tomorrowland had clear goals. One of the other original locations, Adventureland, lacked that sort of definition. Disney himself possessed a specific vision about what it should become, saying  “The spirit of adventure is often linked with exotic, tropical places. Many of us dream of traveling to those mysterious, far off regions of the world.” He wanted guests to experience the sensation of journeying to faraway destinations such as Africa and Asia. The idea was that the instant they reached the sign for what he called the Adventureland portal, they would feel transported.

Disney formulated his ambitious expectation for Jungle Cruise based on a popular movie series from his company, Walt Disney’s True Life Adventures. These documentary features and shorts earned the company eight different Academy Awards for their quality, and one of them in particular influenced Uncle Walt’s thinking. His studio released The African Lion in 1955, but it had filmed for three years prior to release. It highlighted all the literal dog-eat-dog horrors of nature, demonstrating that only the strong survive. As the king of the jungle, the lion takes what it wants, something the movie aptly demonstrates when a lioness hunts a wildebeest.

Disney loved his film’s examination of the many different species of creatures uneasily sharing the same savannah. He also admired the sweeping backdrops of Kenya and what is now Tanzania. He wanted to recreate those majestic jungles at Adventureland to make guests undergo a nature journey while at Disneyland. All he had to do was build a series of man-made structures that could provide this sensation.

“I told these guys this morning, but they didn’t believe me. They’ll get the point. In the end.” 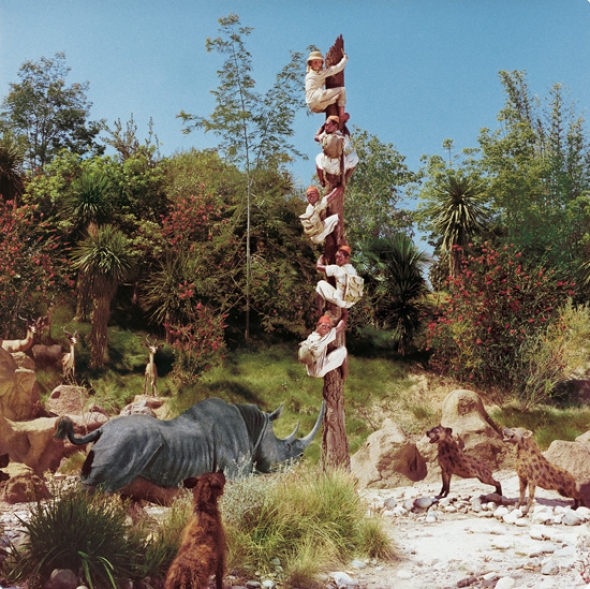 They were problems with building a part of the park entirely unlike anything seen before. For starters, there were construction issues from day one. Consider the issue from a regular employee’s perspective. You’re a California builder in the 1960s. You understand all the challenges of your daily work life, many of which are exacerbated by the arid weather in the state. Every project is basically the same until you hear about the world-famous storyteller who has bought 160 acres of land in your region. You realize that if you can get a job with that company, you’ll be set for life. That guy and his company will need new buildings for decades to come.

Understanding how critical getting this job is to your future, you interview and are lucky enough to land a position. Now imagine what it’s like to show up for your first day on the job. Whereas you’ve worked with basic brick and mortar your entire life, this weirdo from Hollywood doesn’t want you to build just any wall. No, you have to craft extremely realistic representations of faraway destinations, and you have to do it on a tight budget.

Did I mention your new boss is a huge micromanager? If you waste any concrete, this guy who made all those movies immediately gets in your face and complains about how much money you just spent on the part of the construction nobody will notice. All your new co-workers love to grouse about his favorite quote. “By the time you get through burying all our money underground, we won’t have a thing left for the show!” You can’t really blame the guy, either. The initial quote he got for the property was laughably low. They told him it’d cost four million to build his dream park. The construction budget quadrupled years before it’d open for business, eventually costing $17 million.

The whole situation is untenable. Despite the fact that you’ve got decades of experience in construction, you feel like you’re learning everything all over again. Walls have to look like they’re in Africa or Asia, so you’re trapped between building them to pass California inspection code and pleasing the guy who understands where everything’s gonna go next year when the park opens. Even when you try to do something great, he complains. You pour concrete and steel bars to create this majestic cliff setting overlooking the man-made waters below. You’re convinced that it’s going to become the ride’s showstopper, this thing the blueprints describe as Schweitzer Falls. Rather than praise you, however, the guy gets in your face about whether you really need that much concrete for a place where nobody will ever walk.

Yes, working on the jobsite for what would eventually become Adventureland was stressful. Sixty years later, Imagineers have trained for years in how to build a wall that doubles as a set piece for a park attraction. When Disneyland was only a dream, however, the on-the-job training was crazy. Construction workers were guinea pigs for a style of building that is accepted as common in the industry now, but it was unprecedented at the time. New employees had to learn not just how to build something but also how to do so in a way that allowed for future renovations. To their credit, these thankless builders raised many man-made structures that still exist today.

“We have a problem, but we’re all in the same boat.” 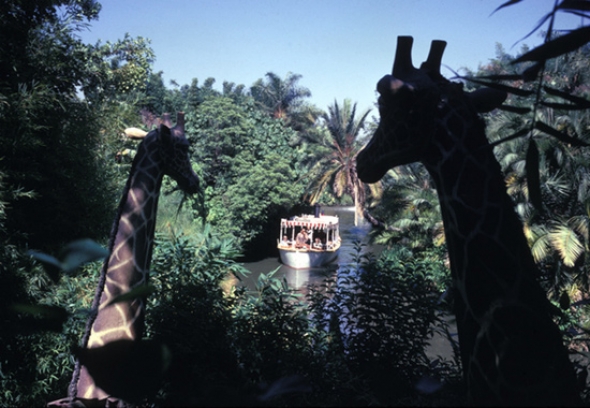 The entire process might have proved impossible if not for Admiral Can-Do. Joseph Fowler knew more about building something from nothing that virtually anyone else in the world, save for Walt Disney himself. Fowler was a savant as well as a renaissance man. He attended the Naval Academy as an undergraduate, finishing second in his class. Four years later, he earned a Master’s Degree in naval architecture from Massachusetts Institute of Technology. Suffice to say that the dude was brilliant.

Fowler loved the sea, and he was widely renowned as a master shipbuilder. Prior to World War II, he built a fleet of vessels in China, but he dutifully returned home to offer his service to his country. The free world owes him a debt of gratitude, because Joseph Fowler personally designed and helped to build the U.S.S. Lexington and U.S.S. Saratoga. His work earned him international respect, and when he joined the fight in World War II, he received a commission worthy of his reputation. Fowler ran the San Francisco Navy Yard and effectively all West Coast operations of the United States Navy. For his work, he was promoted to Rear Admiral, and he’s one of the people who can explicitly demonstrate how his efforts helped defeat Hitler.

After retiring in 1948, Admiral Fowler sought a new challenge, and fate introduced him to it when he met Walt Disney for the first time. Academy Award-winning writer William Goldman maintains that talent tends to cluster, and so it should come as no surprise that Fowler and Disney became fast friends. Two men of extraordinary accomplishment warmed to the idea of working together. Disney recruited his new buddy to head park construction at Disneyland.

Fowler had earned his reputation for creating something out of nothing, and his extraordinary self-confidence fit perfectly with the challenges of bringing Disneyland to life. Whenever Disney requested something ridiculous from his war hero park builder, the admiral replied with his reflexive catchphrase, “Can do.” If you love Disney’s theme parks, you owe almost as much to Admiral Can-Do as you do to Walt Disney himself.

One ride through one of Disneylands cats was walking around in the middle of the Africa scene (the one with the sleeping zebra). Without missing a beat the driver stops and points it out and starts talking about fake looking the cat is and how they really should update that animatronic and apologized for the poor quality of the cat. We then rounded the corner where there was a duck swimming. He started screaming that it's real and that he had been kidding before but this time we were in real danger and made everyone get down. Hands down the best run through I've ever had!

When leaving the attraction, the Skipper said to a girl with red hair, "If you dry your hair after you wash it, it won't rust as bad." I'm sure it is not an "official" part of the script, but it is the most memorable line from that ride.

As you exit the boat be careful not to step on any children. Be careful to choose the one you WANT to step on and step only on him.

We were held up by a delay in reaching the dock so our skipper laid this one on us: "Why did the chicken cross the road? To get to your house. Knock knock. Who's there? The chicken." I'm still laughing.