Back to the Future's Doc Brown Saved Universal Studios Florida. This is How.

Back to the Future: The Ride would require more employees than any other ride at Universal Studios Florida. 35 would be on duty at all times (by comparison, Kongfrontation had only 18 staff), performing tasks such as managing queues, checking seatbelts and watching monitors. Staff could view riders in the vehicles from a carpeted catwalk seven stories above the ground, from which the vehicles resembled “huge, jitterbugging beans” according to one observer. An attendant stationed in this position could stop the ride at any point if someone tried to climb out or stand up. For all its sophisticated technology, the ride was started by the simple push of a button. 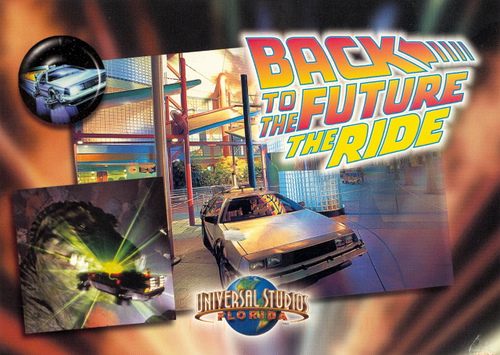 Universal hoped to pin its turnaround on Back to the Future: The Ride, reversing the negative perception of the park caused by its early troubles. “This will be a whole new positive swing for Universal Studios Florida,” said Steve Marble, the ride's senior project manager.

The company had once again pioneered not just one, but multiple new technologies in the theme park arena. “We wanted to take our guests inside the motion picture screen and let them experience what it feels like to ride in Doc Brown's car through time,” said Winnick. “To do that, we combined the latest technology in flight simulators, hydraulics, pneumatics, control systems, with live effects like wind and fog, gave them vibration like they've never felt before...took all of that and combined it with a spectacular motion picture film, the largest image available in the industry.”

You can take a look at the ride experience in the video above.

Given all the technological envelope-pushing that was going on, there was a significant risk of a Jaws-style disaster (the full story of which can be found here). Determined to avoid this, Universal pushed Back to the Future: The Ride back from its originally-scheduled opening date of January 1991 to the spring of that year. The attraction did actually begin hosting riders in January, but remained in “technical rehearsal” for three months, making time travelers of more than 600,000 people during that period. Universal was taking no chances, and declared that the attraction would not be ready for opening until May 2, 1991. 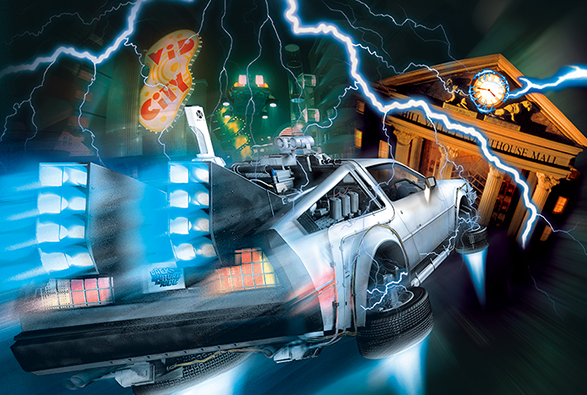 On the big day, the movie’s star, Michael J. Fox, was on hand to try the ride out for himself, as was Mary Steenburgen, who played Doc Brown’s love interest Clara in the final movie. Both were impressed. “You feel as though you're flying, and that you're flying through time, looking down into a volcano, and being swallowed by a Tyrannosaurus Rex,” said Steenburger. “It's just extraordinary the way they combined the movement of the DeLorean and the film footage.” Fox, who would turn 30 that June, commented: “I like the idea of having my own ride. My own ride - like I get to go on it whenever I want.”

The star-studded opening ceremony was reminiscent of Universal Studios Florida’s opening day, but the performance of the ride was not. It worked without a glitch, providing a picture-perfect debut for Universal and prompting analysts to predict that the park would provide more of a competitive threat to Disney. The critical response to the ride was very positive, with Fox himself summing up the prevailing mood: “I'm not getting paid for this. This is the best ride. It's unbelievable.” 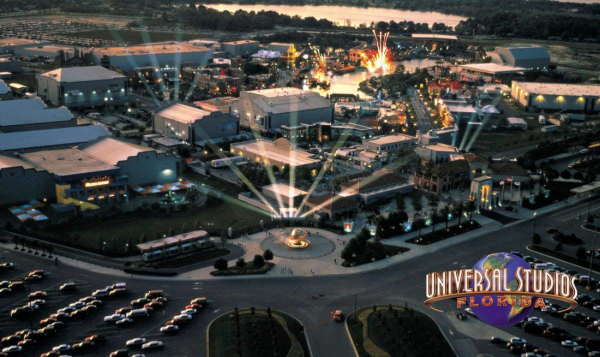 Following the successful launch of Back to the Future: The Ride, Universal was bullish about its prospects for 1991. “I think we will have a blockbuster summer,” said general manager Tom Williams. “It puts yesterday's news in just that category - namely, yesterday's news. We are moving forward. The past is behind us.”

Analysts agreed. “Universal will be much more competitive this summer than last,” weighed in Alan Gould of Dean Witter Reynolds Inc., a brokerage in New York. “It looks like Disney will have to come up with some new creative rides.” After the struggles of 1990, MCA had put plans for a theme park in Japan on hold – even after it was acquired by its new Japanese owner, Matsushita. Now, brimming with confidence, it revived them. Universal Studios Florida, rather than Universal Studios Hollywood, would form the template for the Japanese outpost.

MCA was struggling overall, as Sidney Sheinberg conceded in November 1991: “Some of the businesses that we're in are very difficult businesses right now, the most difficult that I've ever seen them.” Whereas it had been the black sheep of the corporate family in 1990, Universal Studios Florida was now the one bright spot. Attendance at Universal Studios Hollywood was flat at 4.6 million, but the company claimed that visitors numbers at its Florida sister park were “well above projections”. Though many of those guests had received discounted or free tickets as a result of the previous year’s issues, Universal was bullish enough to raise admission prices by nearly 7 percent to $32.86 for adults and  $26.50 for children (including tax).

Universal’s success was seemingly coming at the expense of its great rival. In March 1992, the Wall Street Journal reported an MCA official as claiming that the park had surpassed Disney-MGM Studios’ attendance by several hundred thousand guests in 1991. In total, Universal Studios Florida pulled in 5.9 million guests that year – close to the six million figure that Sidney Sheinberg had originally aimed for. Much of that success was down to Back to the Future: The Ride.

I am a huge fan of the Trilogy and was sad to see the ride go. It was definitely dated and most new visitors haven't even seen the BTTF movie(s) so I understand why they changed it to the Simpsons. The Simpson ride is great but I will miss the BTTF ride. Now I have a reason to go to Japan to relive the ride with my daughter.