Back to the Future's Doc Brown Saved Universal Studios Florida. This is How.

By any measure, the debut season of Universal Studios Florida in 1990 was a disaster.

The park’s three headline attractions – Kongfrontation, Earthquake: The Big One and Jaws – all suffered from crippling technical problems for months. Visitors were furious, and managers were forced to sanction vast numbers of refunds and the handing out of free return tickets. Ambitious attendance forecasts were torn up, and revenue targets were missed by wide margins. Meanwhile, rival Disney looked on in amusement as its own Hollywood-themed park, Disney-MGM Studios (opened a year earlier), quickly proved to be a commercial success.

The damage to Universal Studios Florida’s reputation was immense. Fortunately, just as in the disaster movies that Universal was famous for producing, rescue was on the way.

Doc Brown was coming to town – and he was bringing his time-travelling DeLorean with him.

Back to the Future: The Ride opened in 1991, and proved to be just the smash-hit attraction that Universal Studios Florida needed to recover the ground it has lost the previous year. Over the next 16 years, it entertained millions of guests, taking them on a thrilling adventure through time that most will never forget. Even now, it lives on – in the form of a clone at Universal Studios Japan, and in the form of the ride system that still forms the basis of its Simpsons-themed replacement.

In the latest of our In-Depth Retrospective series looking back at classic, lost rides, we’ll take a leaf from Doc Brown’s book and travel back in time to discover how Back to the Future: The Ride became the most technologically-advanced attraction of its time. We’ll explain exactly how it worked, and recall the ride experience that made it a classic. Finally, we’ll look at what became of the attraction, and how it left a lasting legacy.

Let’s stock up on plutonium for the flux capacitor, and set off back to 1986… 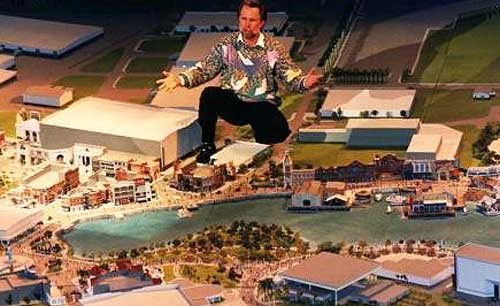 In 1981, Universal’s parent company, MCA, had purchased 423 acres of land in Orlando, with the intention of setting up a version of its Hollywood studio tour close to Walt Disney World. To the company’s frustration, however, none of its prospective partners came on board. Five years later, it had still failed to secure the finances needed to get the project off the ground. Even worse, it had stoked a newly-competitive Disney into action. In March 1986, construction work had begun on Disney-MGM Studios – a park that bore a striking resemblance to Universal’s original plans for its Florida property. 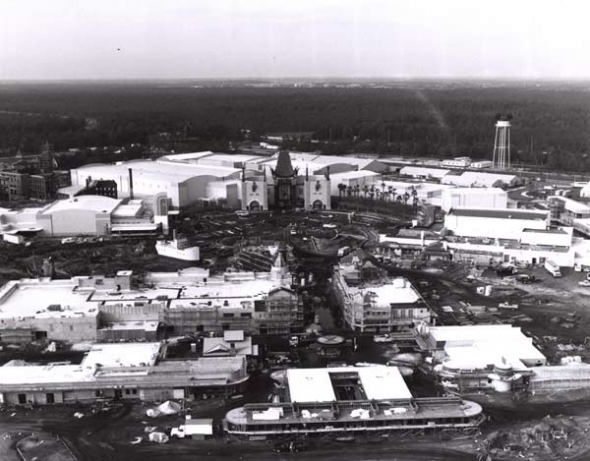 Luckily, the fate of Universal’s proposed attraction in the Sunshine State was about to be changed by a very famous, very large ape.

The Florida project was on hold, but that hadn’t stopped some elements of the plans from being revisited as potential additions to the existing Universal Studios Hollywood. Chief among these was a section based around iconic ape King Kong, and by spring 1986, an animatronic version of the legendary movie monster was almost ready to begin terrorizing guests on the tram tour. 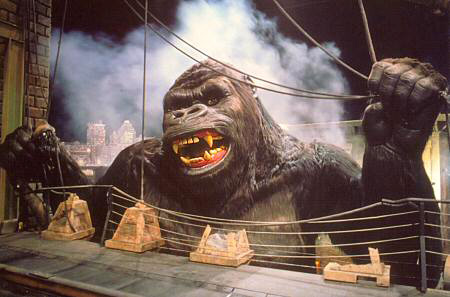 Peter Alexander, a former Disney Imagineer and one-time college roommate of Steven Spielberg, was working on the figure in a soundstage on the Hollywood studio’s lower lot. Spielberg (who was involved in the planning for Universal Studios Florida) arrived unannounced, and Alexander offered to show him Kong in action. The movie director was suitably impressed, and said: “You guys are pretty good at this. My friend George Lucas [director of Star Wars] told me only Disney could do this. He just took me on Star Tours at Disney. He said, ‘You screwed up going with Universal. They could never do a Star Tours’”. In Spielberg’s mind, he was already wondering what Universal’s creative team could do with another science-fiction property, the Back to the Future series.

According to Alexander, the next day he was called into a “Spielberg Visit Debrief Meeting” with MCA CEO Sidney Sheinberg. Spielberg had called Sheinberg to express his admiration for the Kong attraction, and Sheinberg was excited. He was even more excited when attendance at Universal Studios Hollywood spiked after Kong’s debut, and more convinced than ever that the Florida project should go ahead. With Chairman Lew Wasserman and Sheinberg still infuriated by Disney’s “theft” of Universal’s plans and inspired by Spielberg’s comments, the Florida project – at that point, “dead as a doornail”, according to Alexander - was revived. 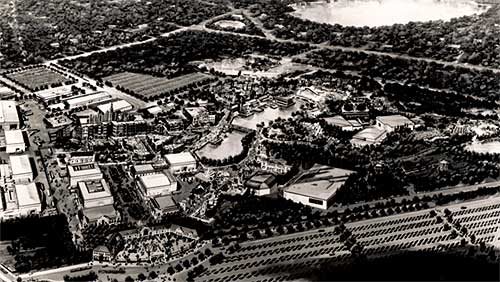 On December 9, 1986 came MCA’s grand announcement: it had found a partner to help develop its Florida project. Cineplex Odeon Corp., a Toronto-based entertainment company 50 percent owned by MCA, would be an equal partner in what would now be known as Universal Studios Florida. Sheinberg was on hand to announce that construction would begin early in 1987, with a planned opening date in 1989. The race with Disney was on, and Sheinberg was defiant: “We have every expectation that we'll do well. We will have something that takes a back seat to no one's studio tour.”

Spielberg was along for the ride. In March 1987, MCA announced that the director of Jaws, E.T. – The Extra-Terrestrial and a swathe of other hits had signed on as a “creative consultant” for Universal Studios Florida. With George Lucas working on attractions for Disney, the pair – long-term friends, and collaborators on the Indiana Jones series – were now pitted in competition with each other. The announcement brought with it the first hint as to the actual content of the Florida park, with MCA revealing that attractions based on three Spielberg movies would be featured. Sheinberg promised that Spielberg’s involvement would not be superficial: “His participation is with the entire attraction. It’s a relationship not limited to one attraction or to attractions based on his films.” 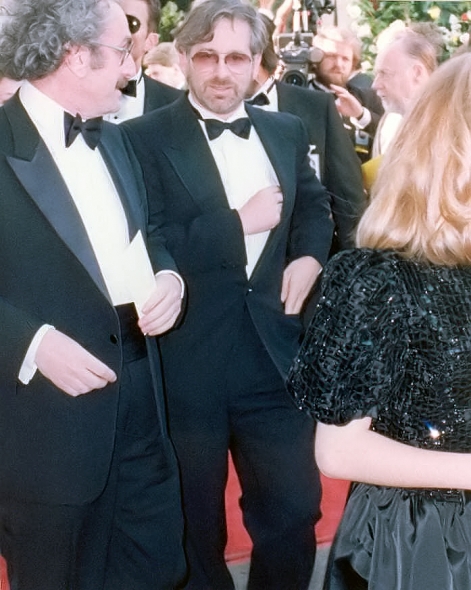 Steven Spielberg, pictured in March 1990. Photo by Alan Light. Licensed under CC BY 2.0 via Wikimedia Commons.

The deal that tied Spielberg to Universal was extraordinarily lucrative for the director. According to executives with knowledge of the arrangement, under the terms of the agreement Spielberg would collect two percent of the gross revenues from Universal Studios Florida (including tickets and concession sales), and this was designed to continue in perpetuity, such that generations of future Spielbergs would also share in the income. 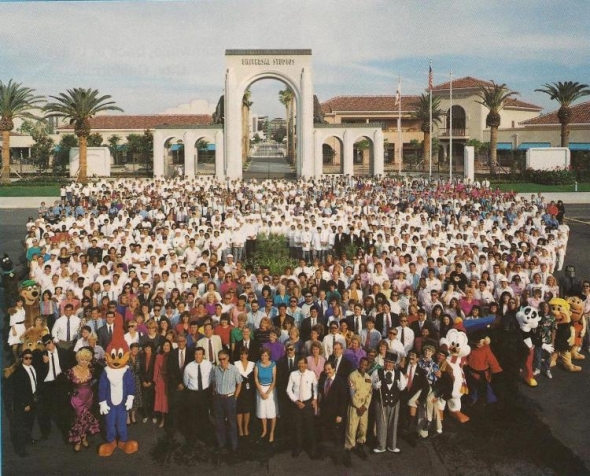 The 1989 deadline was missed – by a wide margin. It wasn’t until March 1990 that Universal began mailing out hundreds of invitations to the grand opening of Universal Studios Florida.

By now, delays and cost overruns had caused the budget for the project to balloon to around $630 million. Even with this level of investment, there was widespread speculation in the press that the park’s rides would not be ready in time for its opening day. Tom Williams was forced to deny these rumors, insisting that only a $40 million simulator ride based on Back to the Future was scheduled to open later, in early 1991.

At 8am on June 7, 1990, Steven Spielberg led more than 50 well-known stars from stretch limousines down a red carpet towards Universal Studios Florida’s entrance. Spielberg was at the head of the line, cutting a filmstrip ribbon with an oversized pair of scissors.

Things began to go wrong even before the first guests arrived for the grand opening. At 4.30am, just hours before Spielberg cut the ribbon, a power outage knocked out the software that managed the Earthquake: The Big One’s special effects. 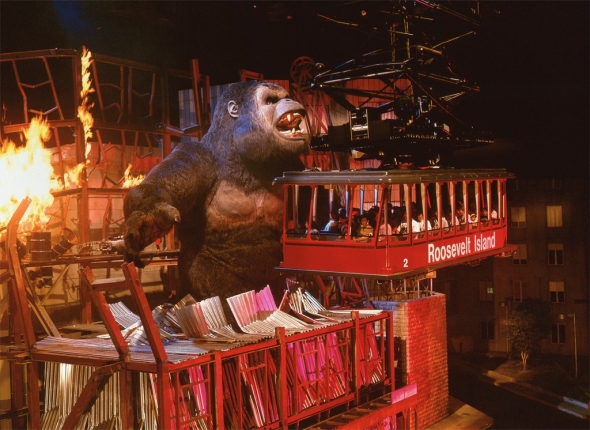 Things didn’t improve once guests were inside the park. The “talkback” software that managed the interaction between King Kong and the tram holding his victims was still not operating properly, and technicians were forced to trigger the enormous animatronic creature’s movements manually in order to ensure that Kong didn’t snap his hand off.

While Kongfrontation and Earthquake were suffering, Jaws fared even worse. The ride operated sporadically for just two hours before thunderstorms in the afternoon forced it to be shut down for the day. Spielberg and his family were reported to have been among those trapped on the ride.

Disgruntled visitors stormed the park’s Guest Relations department. More than 1,000 received either cash refunds or free tickets for a return visit. The following day, Universal was forced to offer a similar deal: everyone that bought a ticket would automatically receive a free ticket for a future visit.

Universal was optimistic that Earthquake and Jaws would be working on the day after the grand opening. Kongfrontation, they said, would be out action for at least a few days. Their optimism was misplaced. 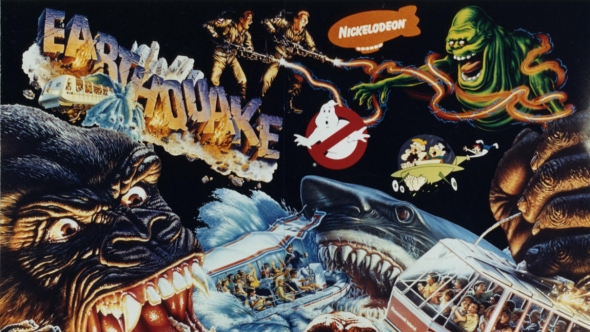 Universal Studios Florida’s grand opening took place on a Thursday, and as it reached its first weekend, Kongfrontation and Earthquake: The Big One were both closed. Although signs warned that it too would be out of action, Jaws did finally open on the Saturday afternoon. Staff, though, were keen to stress that the runs were mere “technical rehearsals.” At one point, a boat’s skipper was forced to say: “Imagine explosions over there.”

Come July – one of the busiest months of the theme park season – Kongfrontation and Earthquake were still closed, and weren’t expected to be open until the end of that month. Alan Gould, an entertainment industry analyst for brokerage Dean Witter Reynolds, said: “The impression that is left by all this is that you have a company that has a park in California and that spent another full year in planning after Disney-MGM opened and then still wasn't able to open their park well. You expect a few glitches on opening day, but you don't expect two of the five major rides not to be working.” Even worse, those two rides were the ones that Universal had built its advertising campaigns around.

Attendance was suffering, and appeared to be well below the level needed to achieve the six million target set by MCA. “They’ve kind of lost the summer,” said Morgan Stanley’s Alan Kassan. “What they might wind up doing is having a very slow first year and then having to rebuild a positive image gradually.” Most agreed that Universal had opened too early in its haste to welcome guests for the summer season.

It seemed that there was a real risk of Universal Studios Florida failing altogether. Could the situation be recovered?

I am a huge fan of the Trilogy and was sad to see the ride go. It was definitely dated and most new visitors haven't even seen the BTTF movie(s) so I understand why they changed it to the Simpsons. The Simpson ride is great but I will miss the BTTF ride. Now I have a reason to go to Japan to relive the ride with my daughter.