Disney Canned the Best Theme Park Concept it Ever Had. Here's Why. 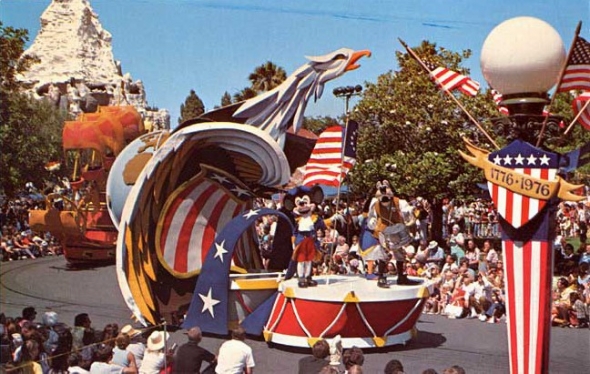 Imagine. It’s 1976. America is celebrating its bicentennial and, across the entire country, celebrations have been ongoing for a year. If you can imagine, the bicentennial had spread unbridled and organic patriotism. Americana was in full swing and – put simply – people were just proud to be Americans.

And there may be no better place to celebrate that than Disneyland, with its brass plaque engraved with Walt’s dedication, calling for the park to be  “dedicated to the ideals, the dreams, and the hard facts that have created America.” The plaque positioned over the park’s entry tunnels says:

“Here you leave today and enter the world of yesterday, tomorrow, and fantasy.”

And in the brand new Discovery Bay, you can be in all three at once. 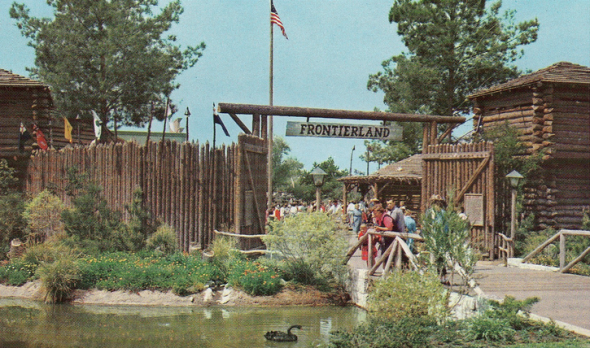 It all begins in the park’s Frontierland – one of the park’s five original lands as overseen by Walt Disney in 1955. Frontierland is meant to be a celebration of the nation’s roots and – more importantly – its growth.

Westward expansion was at the heart of American optimism in the 19th century and the call for “manifest destiny” meant that Americans were destined to expand throughout the continent, claiming new territory and leading lives of fulfillment and promise. The sleepy Western town of Frontierland is somewhat like a living museum of the era, encapsulating the endurance that 1860s explorers must’ve displayed.

But now, on the edge of the quiet mining town is something new. Soaring red peaks have appeared – a deep red, iron-rich mountain range of knobby, almost unbelievable spires. This new, headlining attraction is the one you’ve heard people talking about – Big Thunder Mountain Railroad. On board, you’re whipped around tight turns and past all manner of desert creature as your runaway train barrels through precarious tunnels and freshly dug gold mines. 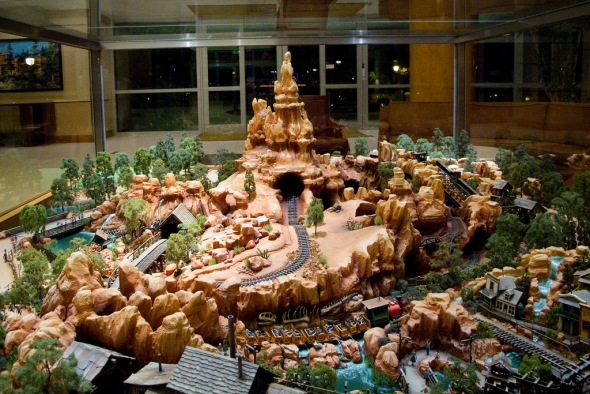 After all, legend has it that there’s gold deep inside of the mountain.

Big Thunder Mountain is exactly what Disneyland needed. It’s got the magnetic draw of a thrilling roller coaster, but its gentle slopes and vivid scenery makes it perfect for the whole family. Once you’ve unloaded from the coaster, your adventure has only just begun.

Big Thunder Mountain is only the first part of this brave new expansion to Disneyland. It serves as the gateway to a most unusual and picturesque place. After all, the miners who struck the mother lode inside of Thunder Mountain won’t stay in sleepy Frontierland. They’ll pack up their wagons and continue their drive West through the Gold Rush. And eventually, they’ll make it to the coast… 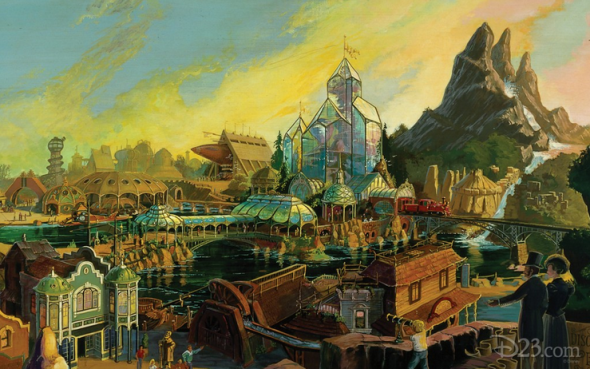 This seaside port – constructed along the northeastern edge of the Rivers of America – is meant to resemble the city of San Francisco from roughly 1860 to 1880 – just after the California Gold Rush when the city was called “the Paris of the West.”

But this is more than just a historical recreation of the city. In Discovery Bay, you’ll find the epitome of Disney’s balance between reality and fantasy – in this version of San Francisco, the gold has drawn international adventurers, explorers, thinkers, and designers to create a gold and bronze bay of astounding architecture, cultural melding, and technological marvels that we today might call “steampunk.”

It begins along the waters of the Rivers of America. Along a rocky outcropping, a tall eccentric Lighthouse beckons visitors in. This “weenie” lighthouse would draw traffic from Frontierland and Fantasyland, similar to Tomorrowland’s Rocket Jets or Sleeping Beauty Castle’s towers. Nearby, the classic Sailing Ship Columbia would be docked at a port full of crates and nets (a cleverly disguised children’s play area) with a gang plank leading up to the ship’s deck for exploration. 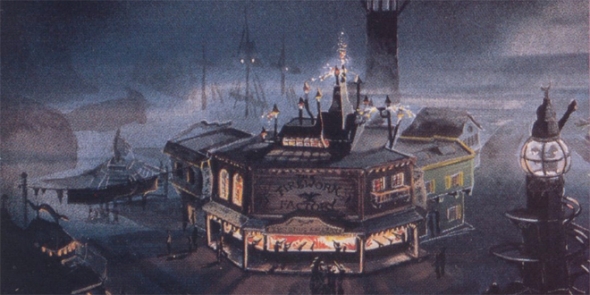 There, along the water’s edge, would be the Chinatown district of the eclectic port city where Chinese immigrants have built a wharf of culinary creations from Asia. (You might compare this detailed area to California Adventure’s Pacific Wharf, which is modeled after nearby Monterey’s cultural docks). In Chinatown, you’ll find the most unusual Fireworks Factory attraction. Early drafts of Discovery Bay call it a shooting gallery along the lines of Frontierland’s existing one, but later iterations cast it as an interactive dark ride as riders launch pinwheels, sparklers, and firecrackers along the factory’s assembly line. 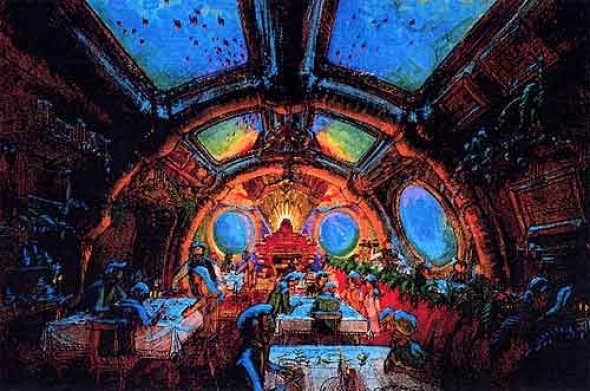 Visibly docked out in the Rivers of America is a 200 foot long recreation of the iconic Nautilus submarine (as designed by Harper Goff for the 1954 film 20,000 Leagues Under the Sea). Ascending down a spiral staircase at the water’s edge, you can enter into the parked Nautilus for a walkthrough of the film’s most famous scenes (including a run-in with the menacing squid).

Guests aboard the Nautilus would also find the blueprints for the fantastic power structures that would power Discovery Bay, tying the Verne universe to Disneyland’s new area, and – in some descriptions of the land – a simulator ride (pre-dating the technology's Star Tours debut) through Nemo's nautical world called Captain Nemo's Adventure. The Nautilus would also be home to a luxurious full service restaurant in the submarine’s Grand Salon (above).

Perhaps the attraction Disney fans most would like to have seen was Professor Marvel’s Gallery of Wonders. This one-of-a-kind attraction was featured in a revolving theater (similar to the Carousel of Progress, which had just been relocated to Magic Kingdom) and would star an inventor and explorer named Professor Marvel who would introduce his menagerie of unbelievable animals, experiments, and inventions during the musical journey. Perhaps his most astounding find was his pet dragon, which faithfully sits on his shoulder as he recounts the magical journeys he’s had. 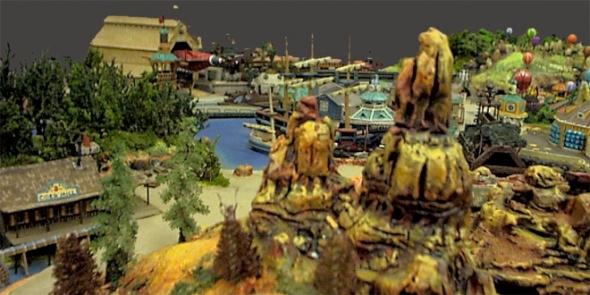 Just outside of town along a grassy hill would stand the Western Balloon Ascent, a Skyway style attraction with guests suspended below hot air balloons to lift up and over Discovery Bay for flights to the nearby Dumbo’s Circusland (a co-planned expansion of Disneyland’s Fantasyland, later adapted into Magic Kingdom’s Storybook Circus). 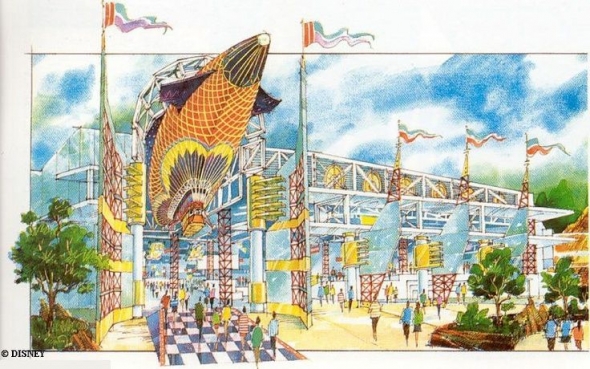 The icon of the streets – and perhaps all of Discovery Bay – is the massive Hyperion Airship, docked in an astounding mechanical hangar at the water’s edge. The Hyperion acts as the grand entry to the land’s signature attraction: The Island at the Top of the World. This mysterious E-ticket would’ve been themed to Disney’s 1974 adventure film of the same name, and would offer brave adventurers “a trip aboard a fantastic flying machine to an Island of paradise located at the Top of the World.”

Even before Discovery Bay opened, Disney hinted at potential expansions and additional E-tickets that would’ve made their way to the land in a Phase II. 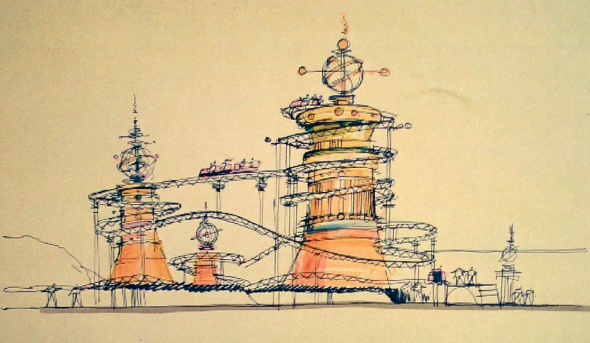 Two roller coasters were planned for the area. The first, The Spark Gap Coaster, would’ve been a family-sized compact coaster (think of Gadget’s Go Coaster or the Barnstormer, which incidentally are identical) that wrapped around tremendous gold towers pulsing with Tesla coil electrical sparks. The second was called The Tower. While less is known about The Tower, it apparently would’ve included a roller coaster car being drawn up a spiral lift hill “via magnetism” before a “reversed magnetic polarity” sent it freefalling backwards down a new path through a corkscrew. 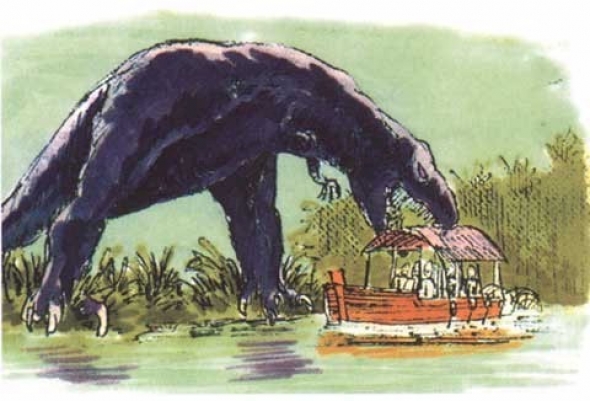 Beyond the Hyperion hangar stood a towering, dormant volcanic mountain with bubbling waterfalls. This craggily peak would disguise a new E-ticket for the land based on H.G. Well’s Time Machine called The Voyage Thru Time. Alternatively, some concept art signals that the mountain might’ve been home to an indoor / outdoor boat attraction called The Lost World full of dinosaurs and prehistoric peril. 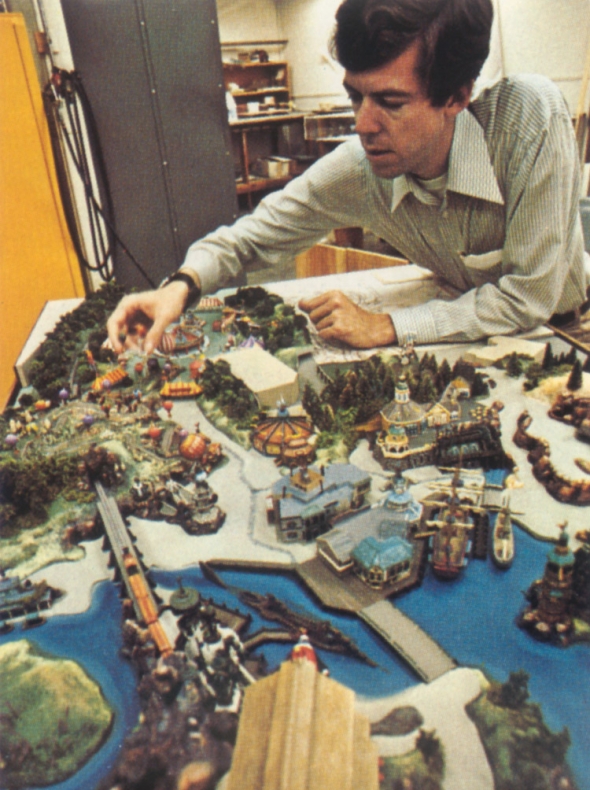 If Discovery Bay had been built, it would’ve been a perfect mix of science fiction, literature, original characters, fantasy, and history. Originally intended to be a mere expansion within Frontierland, Discovery Bay eventually developed into a land of its own. With a narrative born of Frontierland’s Western expansion story and sharing a common continuity thanks to Big Thunder Mountain, Discovery Bay still seemed like so much more.

And how incredible would’ve it have been if the Rivers of America contained four shores, each representing a different American story: the storied backwoods (Critter Country), New Orleans Square, the Old West (Frontierland) and a retro-futuristic San Francisco (Discovery Bay)? When it was officially announced in 1976, fans were delighted. But Discovery Bay never opened. We’ll find out why on the next page.

It would be a fantastic land to be added to the Disney Parks. The film "TomorrowLand" was an excellent film though I feel it had it's release dampened by its competition in the box office. It had Steampunk and Jules Verne elements tied with a theme of timeless optimism and development. Discoveryland could be just what the world needs, even if it doesn't know it.

I know that Claude Coats was his mentor, but this is the first I've heard of Marc acting as such. In those days, Davis people and Coats people stayed in separate camps.

Coats was definitely his mentor more than anyone else out the gate, but Baxter benefited from both schools of thought, it seems. When you think about it, most any successful and "classic" Disney ride has elements of both designers (and obviously many more), and Baxter seemed to have registered that and incorporated a balance between them into his creative process!

Sometimes, Tony's projects leaned more toward Davis' style! Think of his Phantom Manor, which more or less conceded the Haunted Mansion debate to Davis' character-driven favor. Other times, he took Davis'-style concepts and made them a bit more abstract, as in Paris' Pirates. But altogether I think he simply learned that their two styles are complimentary, not mutually exclusive. Which has been a tremendous benefit for us as guests!

This was such a well researched and thought out article, fascinating to read. It gave me a much deeper appreciation of Tony Baxter.

Looking forward to more of your work.

Thanks Chris! On my profile you'll find quite a bit more that I've written on lost concepts and closed attractions that you might find interesting! But I'm a huge fan of Tony Baxter and it's hard not to be. He's responsible for so many of the modern attractions we love, and for so many more that fans beg for.