This is the Most Controversial Disney Theme Park Ever Conceived

Walt Disney always had an intense fascination with history. That interest particularly showed up within the design of his theme parks. For example, the Main Street, U.S.A. at Disneyland and the ones at subsequent Disney theme parks serve to honor various eras of America gone by. At one point Walt even attempted to build a park that would be devoted to American history called Riverfront Square. Sadly, though, that project never got off the ground.

Even after Walt’s passing, The Walt Disney Company has continued to show respect for the bygone days of America. That’s why it should be of little surprise that, at one point, Disney was going to build a park specifically devoted to Americana. In the early 1990s, as part of CEO Michael Eisner’s “Disney Decade,”The Walt Disney Company began work on a new park for Haymarket, Virginia titled Disney’s America.

Disney's America developed into one of the most exciting - and controversial - Disney projects ever conceived. Let's take a look at how it progressed and ultimately fell apart.

Since around the time that Disneyland opened, Walt Disney was eager to create a place where young people could be educated about the history of the nation.

An early attempt to incorporate more history in his growing theme park empire was the Liberty Street concept. In the late 1950s Walt intended to add an area off of Disneyland’s Main Street called Liberty Street. It was to be a cul-de-sac that recreated colonial America, filled of shops and exhibits inspired by that era. Guests would have gotten to see actual silversmiths, blacksmiths and other professionals of that era show off their skills. At the end of the cul-de-sac would have been Liberty Square, a plaza which included, among other things, a recreation of Philadelphia’s Independence Hall.

Inside the recreation of Philadelphia’s Independence Hall (referred to as “Liberty Hall” by Walt Disney and his team) would have been the Hall of Declaration of Independence and the Hall of Presidents of the United States. There would have been two shows, both of which utilized Audio-Animatronics technology. The plans for them were probably premature, as the tech wasn’t anywhere near perfect at that point. The term “Audio-Animatronics” hadn’t even been coined yet! Here are the two attractions:

Concerns about funding and insufficient technology caused the Liberty Street project to fall apart. The expansion budget was instead put towards a much-needed upgrade to Tomorrowland and a single animatronic of Abraham Lincoln. That paved the way to the Great Moments with Mr. Lincoln show at the 1964 World’s Fair, a key event in Walt Disney’s theme park legacy. And, of course, Disney eventually adopted many of the ideas for Liberty Square area at Walt Disney World's Magic Kingdom. 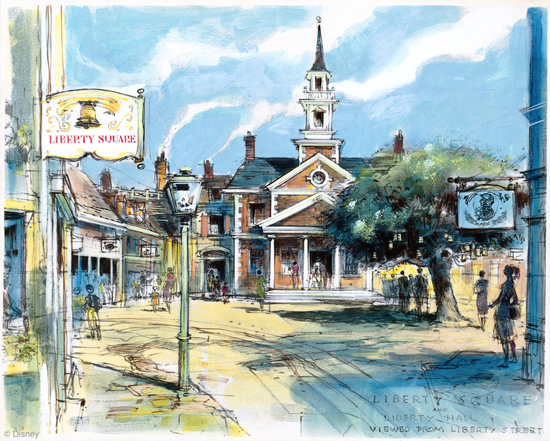 While it didn’t come in the form of Liberty Street, Walt’s desire for another place honoring America would help lead to plans for something much bigger many years later.

The concept of Disney’s America is born 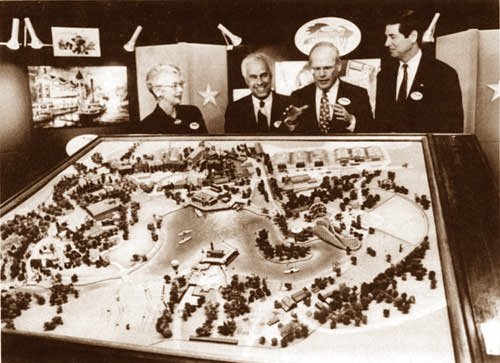 After spending (and losing) a boatload of money on the Euro Disney Resort, Michael Eisner and the Imagineers started looking into ways that Disney could open a less expensive theme park. Eisner and Disney president Frank Wells were inspired by a trip to Colonial Williamsburg in Virginia, but decided that that specific area wouldn’t be a good choice.

Eisner asked the Disney Development Company to find a better place to construct a park. They eventually decided on land in Haymarket, most of it owned by oil company Exxon, who was more than glad to give Disney a long-term option on it. It had a prime location, just twenty miles away from downtown Washington, D.C. That made it the perfect spot for U.S. history fans already on a trip to the nation’s capital. Everything seemed perfect, at first…