“Welcome… to Jurassic Park.” The iconic line's delivery and associated fanfare will live on in cinematic history, as 1993’s Jurassic Park stunned audiences. The film transported guests to the one-of-a-kind wildlife preserve on Isla Nublar off the shores of Costa Rica, where bioengineering firm InGen had successfully done the unthinkable: harvesting fragments of dinosaur DNA from a prehistoric mosquito and repairing it with frog genes, Jurassic Park was inhabited by hundreds of real, living, breathing dinosaurs.

Of course, the park never saw its opening day. Before it could, a nasty breakout or two forced the park’s premature closure.

Even if things didn’t go as planned the first time (and trust us, they fared even worse the second and third go-round), InGen has finally cracked the case of the dino park. Twenty-two years after the accident on Isla Nublar, we’re invited to Jurassic World, built on the ruins of Jurassic Park.

While Jurassic Park would’ve been an exceptional wildlife preserve and zoological park (probably marketed at the “1%”), Jurassic World stomps on the former’s tepid and intellectual remains. Forget placid dinosaur exhibits and informational tours. This is 2015. People want a little bite with their entertainment. Fittingly, Jurassic World is a theme park, complete with rides, shows, and attractions that Jurassic Park wouldn’t have dreamed of. 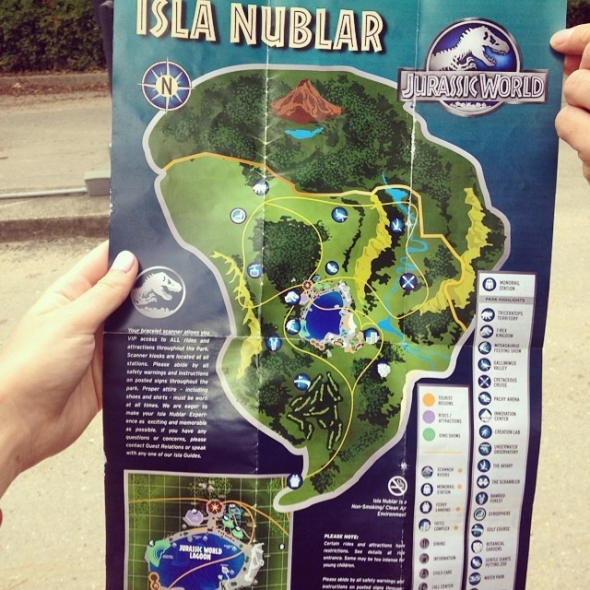 Isla Nublar even houses an 18 hole golf course, botanical gardens, the Gentle Giants petting zoo filled with baby herbivores, the Origin nightclub, an IMAX theater, a full aquatic water park, and of course, a luxurious, deluxe hotel for parkgoers to extend their vacation at the mega resort.

You can read all about the happenings at Jurassic World and the outstanding attractions it offers at the park's official website, which also includes an interactive park map for you to explore.

Come with us now to a time before man, when giants walked the Earth. Let’s take a look at 8 of Jurassic World’s most iconic attractions and explore where those rides might’ve taken their inspiration from the very real theme parks we know and love. 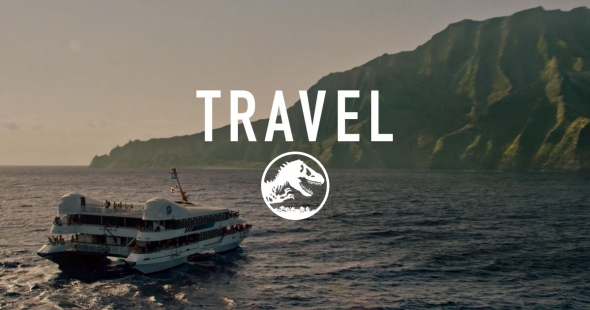 Then & Now: In Jurassic Park, access to Isla Nublar was as elite as the park itself: lifted in via helicopter and landing on an exotic helipad at the base of a hundred-story waterfall, it was clear that Jurassic Park was not the kind of place any old family could visit.

For Jurassic World, things have changed. Access to Isla Nublar is now provided via a ferryboat to carry guests from Costa Rica to the island. There, guests disembark at the Ferry Landing where another means of transportation awaits. 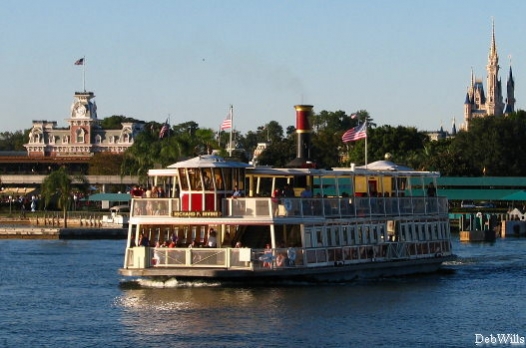 The approach via ferry is something that will sound very familiar to Walt Disney World visitors. Since 1955, visitors to Walt’s original Disneyland stepped out of their cars and through the turnstiles. The infamously small Disneyland property meant that your transition from reality to the park’s fantasy was quite abrupt, and probably not what Walt would’ve preferred.

Blessed with ample space in the Florida Project, Imagineers decided to be a bit more dramatic. Magic Kingdom was built at the opposite end of the man-made Seven Seas Lagoon. Guests wishing to visit the park would first see it from afar and would need to travel to reach it, with the towering Cinderella Castle growing ever closer as they did. This conceptual journey has been discussed and debated by many Disney fans, but suffice it to say, it certainly adds something to the experience.

Jurassic World can only be accessed via ferry, too. While that certainly mirrors the Magic Kingdom entry, it’s also thoughtful: the massive ferries signal that Jurassic World is not an elitist park accessible only to a few, but a mass entertainment complex loaded with families who need mass-transit access.

Once you do land on Jurassic World, you’ve got a bit more traveling to do before your first encounter with the dinosaurs. In Jurassic Park, access beyond the helipad was via off-roading Jeeps carrying the park’s small, VIP groups.

But for Jurassic World’s international destination appeal, The Ferry Landing is home to the park’s first Monorail stop. Here, the sleek and futuristic monorail is waiting to carry massive groups of eager visitors into the wonders of the park. It’s the Monorail that features the iconic wooden gates of the park that swing wide to allow the train to pass through. Jurassic World’s Monorail circumvents the island, stopping at each attraction every 20 minutes. 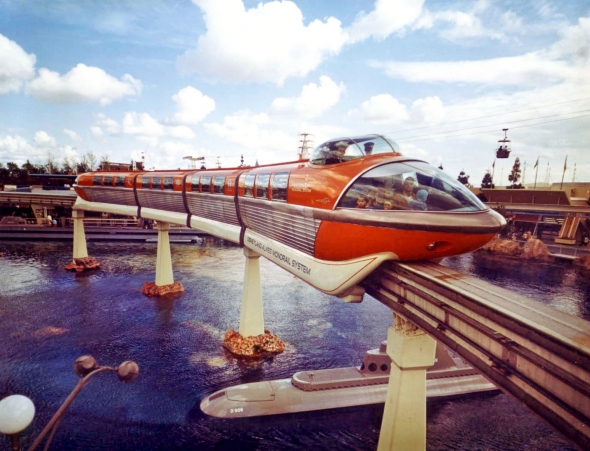 Walt Disney’s Monorail was added to Disneyland’s New Tomorrowland in 1959 as one of three simultaneously debuting attractions with the new “E-ticket” designation. It was Walt’s theory that Monorails (and PeopleMovers) would become sincere mass public transit systems for the future, replacing buses and automobiles with their sleek “highway in the sky” systems that didn’t impede automobile or pedestrian traffic.

In an ironic twist, the inclusion of the Monorail in Disneyland and its subsequent use as resort-wide transportation for Walt Disney World ended up marrying the Monorail concept to Disney Parks. Instead of inspiring real urban transit systems with the prototype, Monorails are now practically synonymous with Walt Disney World. Of course, that makes it all the more certain that Jurassic World’s sleek Monorail is mostly based on Disney’s.

Jurassic World’s Monorail and its loop around the park’s perimeter also feels similar to the railroads that encircle many “Magic Kingdom” style parks.

Note, too, that many zoos and amusement parks use a monorail system to quickly, efficiently, and safely move guests through exhibits. 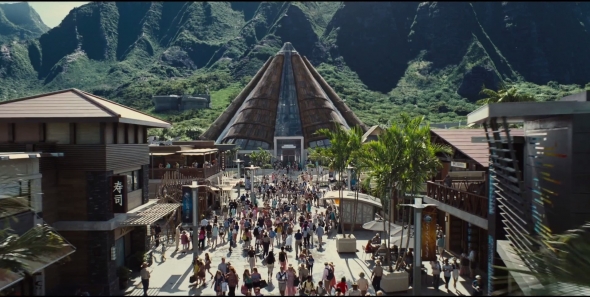 Yes, Jurassic World is anchored by Main Street. The Monorail drops guests off at the area, where the day begins and ends. Main Street sounds like it would make a pretty smart and functional entry, with the classic lineup of modern amenities, the island’s deluxe resort hotel, and popular restaurants like Jimmy Buffet’s Margaritaville (plus more than a dozen other eateries). 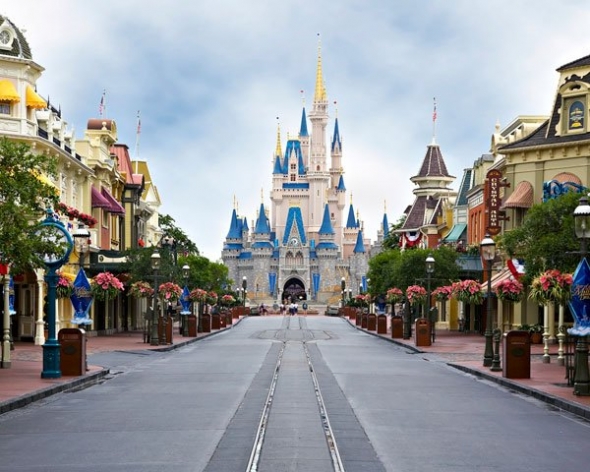 While it doesn’t have much in common with the turn-of-the-century Main Street, U.S.A. land at almost every Disneyland style park, the name is clearly a nod to the universally well-known theme park land. Truthfully, the contents and style of Jurassic World’s Main Street would probably make “CityWalk Nublar” a more apt name…

How the hell could you forget the John Hammond statue?

Main Street at JW looks like it was inspired by City Walk to me...

Sorry but Main Street is mostly inspired by City Walk.

Both in the movie and Real Life city walk have margaritaville. Does MK's Main Street. I THINK NOT.

Yeah. Everything is just so inspired by Disney. Wtf?? Oh, what was I think ink. Disney is the only company with a theme park. Cretaceous cruise was inspired by pandora? really?? A theme park that isn't built yet and it inspired something in a movie that was already made?? Give me a break. I swear this may come as a shocker, but Disney is not the center of the universe.

You forgot the magic bands and fast passes !