The 6 Most Spectacular Steel Roller Coasters in the World

In a recent article, I chronicled the top six wooden roller coasters in the world as voted by the kind folks at the Golden Ticket Awards. Today, let’s focus on the crème da le crème of all theme park attractions, steel roller coasters. These bad boys represent the tallest, fastest, and smoothest rides in existence. They are the ultimate thrill rides, and a great one will stand the test of time. To wit, two thirds of the entries chronicled today were built in either 2000 or 2001, an eternity ago in terms of the digital era.

Steel roller coasters are marvels of engineering, and their designers win the day through clever physics. It’s not coincidental that some of the finest theme parks in the land such as Cedar Point have physics days wherein they invite students to ride the rides while deciphering the underlying math. If you want to view some of the architectural marvels of our times, simply read this list and watch the accompanying videos.

I want to stress that this ranking was done by Amusement Today Magazine. I’m simply relaying their current rankings as well as explaining the underlying thought process of the voters. I say all of this, because anybody who knows me understands that I love Millennium Force the way that most people love ice cream. I’ve previously described it as the apex predator of amusement park rides. Simply stated, there is nothing else like it in the world.

The geniuses at Intamin studied the layout structure of a potential ride at Cedar Point. They appreciated that Lake Erie itself could become the co-star of the ride if they built Millennium Force cleverly. They then conceived the notion to have a methodical vertical start to the ride, thereby providing that panoramic view of the surrounding body of water before dropping the theme park tourist straight down 30 stories in the blink of an eye. Millennium Force is the steel roller coaster equivalent of a bungee jump followed by 93 mile per hour dash through a race track. Who wouldn’t want to ride that?

Everyone should completely understand why this attraction has won the title of best steel roller coaster nine times in 15 years, never finishing lower than second place in its existence. Millennium Force embodies everything that’s wonderful about riding roller coasters. If you don’t believe me, just watch this video. You’ll understand precisely why Millennium Force is the best ride in the world. 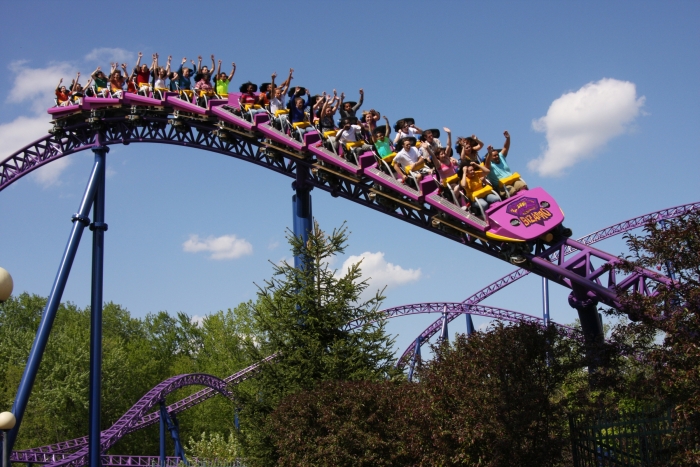 Six Flags New England is one of the most storied parks in the world despite its relatively low profile. Located in Agawam, Massachusetts, this park’s roots go all the way back to 1870. Prior to its purchase by Premier Parks in 1996, it was known as Gallup’s Grove, Riverside Grove, and Riverside Park. After Premier Parks bought the entire Six Flags brand, the pride of Agawam morphed into Six Flags New England, bringing it with all the corporate branding that Six Flags embodies.

One of their early endeavors after the renaming in 2000 was the development of Superman:  Ride of Steel, a fitting premise for the character nicknamed the Man of Steel. This hypercoaster doesn’t have the stunning technical specs of its primary competitor, Millennium Force, but it has still earned the title of Best Steel Roller Coaster five times over the last eleven years, most recently in 2009. Coincidentally or not, that’s the year it was re-themed as Bizarro.

The explanation for the ride’s lasting appeal is that the 208 foot-high ride also incorporates the water below by providing a view of the Connecticut River during a glacially paced lift of the ride cart 20 stories in the air. Rather than rest solely upon the ambience, the ride adds a bit of personality. An onboard audio system plays music and movie clips to enhance the entertainment. Over the years, the theme has changed from silly quotes such as “Game over, man! Game over!” from Alien to the current focus upon short segments of songs from AC/DC and Eminem. The result is a supercharged ride experience that makes you feel like you’re rocking throughout the 77 mile per hour journey. It’s the breathing definition of thrill ride. If you’re struggling to envision the incorporation of music and audio clips, here are videos of the old version and current one. Bizarro has personality. 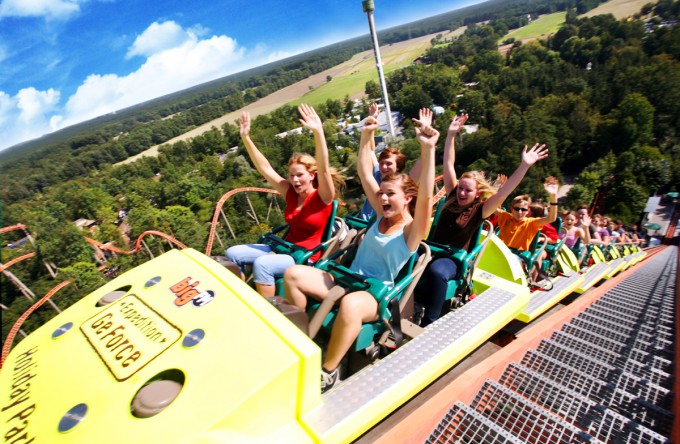 Suffice to say that Intamin is pretty good at what they do. The theme park developer designed the three top ranked steel roller coasters in the world according to 2014 voting.  Expedition GeForce represents one of two non-American rides on the list, and the other is from Canada, which The Simpsons calls America Junior. So, this is the only truly foreign steel roller coaster with such a lofty reputation within the industry.

What makes Expedition GeForce so unforgettable? It’s not the height of 174 feet, which isn’t even enough to qualify as a hypercoaster, nor is it the velocity, as it doesn’t quite reach 75 miles per hour. Instead, this attraction is all about air time, providing seven such opportunities during its 100 seconds of riding. The pride of Haßloch, Germany was one of the curviest steel roller coasters ever built at its inception, and some of the angles remain jaw-dropping even today. Watch this video and pay attention to the 82-degree drop followed later by the sharp, continuous turn toward the end. It’s an extremely clever design spread across 4,000 feet of track.

Sorry guy but your number one choice should be number two.. Fury 325 in Carowinds is 325 feet tall compared to 310 for Millennium Force and reaches a speed of 95 Miles an hour compared to the 93 miles an our of Millennium Force. It is being promoted as the tallest, and Fasted Giga Coaster on the Planet. And if that is not enough the Max Vertical Angle of Fury 325 is 81 degrees. Millennium Force is 80