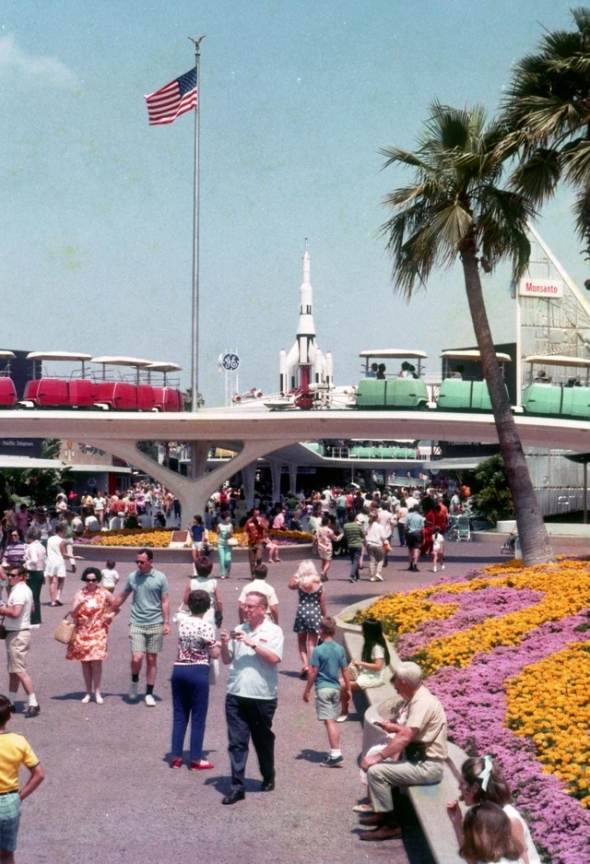 Where were we? Oh, that's right! High over Tomorrowland, comfortably seated in a whisper-quiet PeopleMover cab just as it accelerates from the station and down the land's central straightaway. You inched from the station, further and further until it happened... Passing over an embedded tire, the train suddenly was propelled forward to a brisk 7 miles per hour, zipping pleasantly down the center of the land’s entry.

To your left and right are the two mirror show buildings housing Adventure Thru Inner Space and Circle-Vision 360, respectively. Their façades are adorned with two complimentary murals designed by Mary Blair, the legendary artist responsible for the signature style of “it’s a small world” and its pop-up exterior. While Blair’s style may seem inappropriate for Tomorrowland, the murals are perfect for the New Tomorrowland. 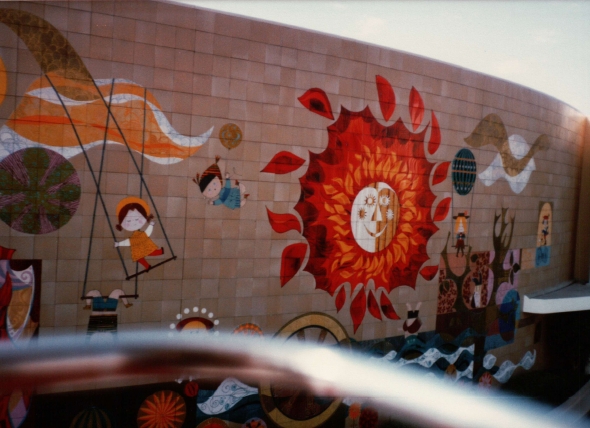 The south mural is focused not on communication, but energy – solar, wind, fire, and water-power are embedded into the international mural. Both murals together are entitled “The Spirit of Creative Energies Among Children,” and perfectly encapsulate the optimism of the future as envisioned by this World on the Move. Each of the murals is 54 feet long, and the second-story PeopleMover provides the best vantage point.

Ride into the future

As the PeopleMover presses past the show-buildings and reaches the edge of Tomorrowland, you’re provided a priceless view of Sleeping Beauty Castle and the park’s Hub. There, the track bends to the left and enters into the showbuilding belonging to another celebrated Lost Legend: Adventure Thru Inner Space, with a cutout in the wall looking down on guests queuing below. The graceful trains glide past the Mighty Microscope and the unusual Omnimover cars that pass continuously into it, reappearing at the microscopes other end mere inches tall! (By 1986, this view would be replaced with a look down into the queue of another Lost Legend: Star Tours, which re-used much of Inner Space’s infrastructure.) 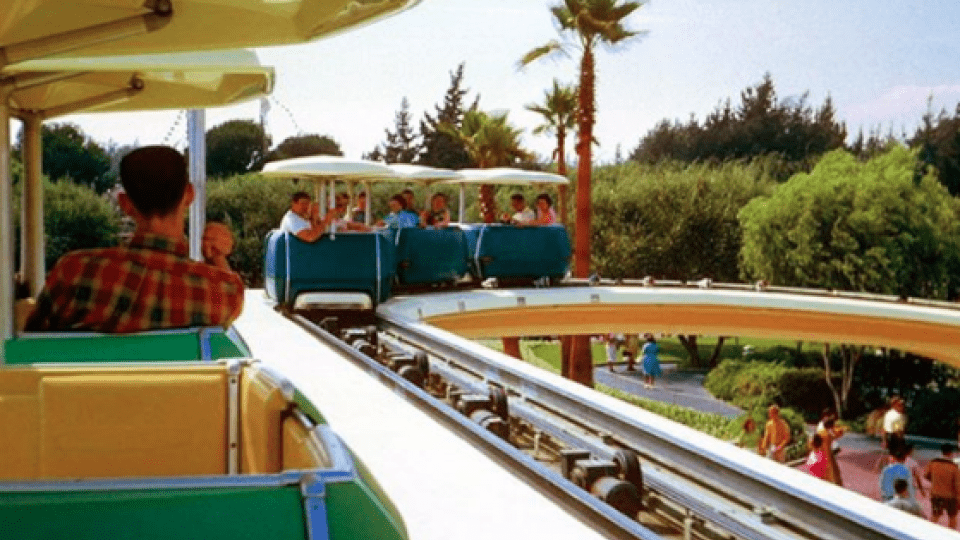 Exiting from the Inner Space building, the PeopleMover would open into a view of the outdoor Tomorrowland Stage where live performances are presented. A decade after New Tomorrowland opened, this corner of the park became dominated by Space Mountain, which the PeopleMover was re-routed to pass through. As the trains glided gently through the stars, guests would provided with a unique view of Space Mountain – the perfect tease for youngsters or those who wouldn’t want to tackle the coaster’s thrills.

Now, the PeopleMover trains exit from Space Mountain, they pass into the Carousel of Progress. But rather than looking into the show, the train encircles the second story of the showbuilding, which is home to Walt Disney’s model for EPCOT – the city, not the park. The train passes around the circumference of the circular building providing exceptional views of the massive model, which is also available for foot traffic by those exiting the Carousel of Progress show. 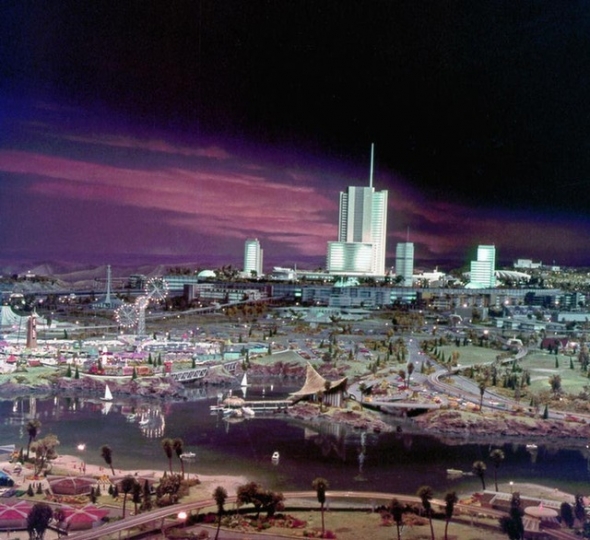 From there, the ride arches over the Skyway buckets, speeds above the Autopia and presses forward to glide above the Submarine Lagoon. Here, subs dive beneath the waves as Monorails pass right alongside the PeopleMover track, the two futuristic mass transit systems coming within inches of each other. The train twists and turns over the lagoon and through the woods of the Autopia. 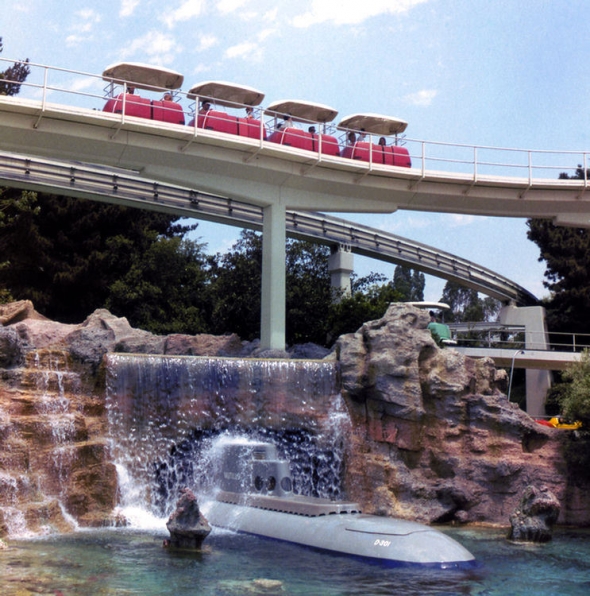 Finally, the trains move through the Circle-Vision theater providing views of its colorful waiting area before re-emerging near the castle and sharply turning left, back to the central straightaway with the Rocket Jets looming overhead. The 16-minute PeopleMover is a breathtaking, gentle, sightseeing tour that’s built into the futuristic land and adds tremendous to the kinetic energy.

You can watch a leisurely video of the classic PeopleMover here:

(Along the way, keep an eye out for an extra feature... In 1977, the PeopleMover track through the upper level of the Carousel Theater was enclosed to become the SuperSpeed Tunnel, with surrounding projections creating the illusion of acceleration. In 1982, the tunnel's projections become the Game Grid from the film TRON. The embedded video from 1990 includes the TRON scene, part of the informally renamed "PeopleMover Thru the World of TRON.")

There's no question that the PeopleMover was a timeless classic. The outstanding attraction was poised to glide into the twenty-first century as a crowd-pleasing, relaxing, magnificent reminder of Walt’s original plans for Tomorrowland and E.P.C.O.T. – a living prototype of the effortless mass transit our world may one day offer. But best of all, the PeopleMover was seemingly adaptable to any style that the land might evolve into, looking right at home alongside the arrival of the Modern Marvel: Space Mountain and its anchoring Googie architecture a decade later, at the tail end of the Space Age in 1977.

But if Tomorrowland has taught us anything, it's that times change. Unfortunately, the future didn't stay quite so bright. Chalk it up to the Tomorrowland Problem once more that, in the '80s and '90s, pop culture's vision of the future looked radically different. Films like Alien, Blade Runner, and even Star Wars made the squeaky clean optimism of the pastel Space Age looked downright naive. Times had changed indeed... And the PeopleMover was in the way of progress.

So imagine one last time that sleek, scientific Tomorrowland of the '60s – a "World on the Move" filled with swirling rockets, streaming Monorails, bubbling Submarines, the revolving Carousel of Progress, the groundbreaking Adventure Thru Inner Space, and the gliding PeopleMover criss-crossing through it all. This is the future that Disney Parks fans yearn for... and if only this mid-century tomorrow had held on through the '90s, it would be seen today as a timeless, nostalgic retro-cool paradise.

But it wasn't meant to be. Truthfully, the pivot point was probably the arrival of the Lost Legend: STAR TOURS in place of Inner Space and the radical, pop-infused Lost Legend: Captain EO playing in a custom-built 3D theater – both offering radical reimaginings of what Tomorrowland (and Disneyland in general) could be. And while Star Tours and Captain EO reigned in the late '80s, the rest of Tomorrowland was falling apart.

The Carousel of Progress vacated in 1975 so that it could instead be moved to the newer Magic Kingdom in Florida. Its replacement – America Sings! – had played a full decade before closing (its Audio-Animatronics moved to the new Splash Mountain), leaving the Carousel Theater empty. The Rocket to the Moon theaters had given way to Flight to the Moon, then Mission to Mars in a continuous attempt to keep up with the future, and by the early '90s, it had closed altogether.

It was undeniable: Tomorrowland needed another floor-to-ceiling renovation. And frustratingly for Disney executives, three decades of Tomorrowlands had proven without a shadow of a doubt that this facelift wouldn't be the last! In fact, by its very nature, Tomorrowland would always need continuous, expensive upgrades that would inevitably become outdated! Unless... Read on as we wrap up the tragic tale of the Peoplemover by exploring the fall of Walt's Tomorrowland...

In the late 70s and early 80s, Disneyland was an annual trip the week between Christmas and New Years. The last one was Spring Break. Anyway, we got very used to seeing it on the out of service sign at the entrance, since it seemed like the hint of rain was enough to shut it down. I suspect that this is why the WDW version was self powered and completely covered... I think that in 5 years we got to ride it once.

Glad to have come across this site. Have gone through most of the links. One ride/attraction I haven't seen yet, maybe I missed it, was the old Eastern Airlines ride in Walt Disney World in Orlando, which is now the Toy Story attraction. I believe it closed up before I became a teenager. I would love to see if anything can be shared about that attraction. Keep up the good work.

This was the DELTA DREAMFLIGHT -- great attraction!!

Another great article. You mention Timekeeper at the end though, that hasn't been there in a LOOOOONG time. It's Monster's Inc. Laugh Floor, which I am sure you already know, but it makes it seem like you wrote this article years back when Timekeeper was still there (another greatly missed attraction, RIP Robin Williams).

With all the strides toward a nature-inspired future, Disney should turn the people mover into a one-way bike path. Disney-branded bikes could only be used on the path. One to three stations could be added at ideal locations. Rules would exist to ensure there wouldn't be too much congestion.
The money saved on build a new attraction on the track would instead go toward safe rails, hanging gardens & ADA compliance. Motorized single/tandem quadracycles would be available for the handicapped.
Separate from the track (but near it), half-pipes & BMX courses could be installed. These would be separate attractions that qualified Disney performers would utilize (and show off). In those areas, there would be wide sections of the track where people could pause & watch.