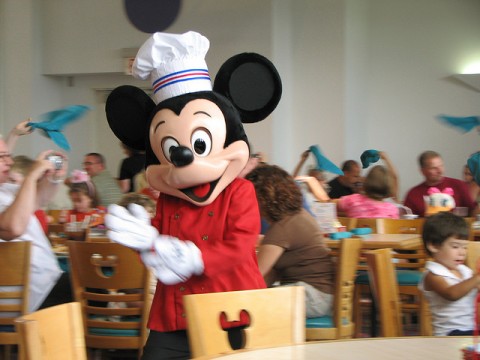 So much of the Walt Disney World experience revolves around nostalgia. We don't just enjoy the attractions and experiences because of what they are – we also enjoy them because of what they've come to represent. When I ride It's a Small World, it's not only the ride that I'm enjoying, but the memories of the countless other times I've ridden it – as well as the people I've ridden it with.

Thus, it's not surprising that when attractions and experiences depart our beloved theme park, we often think about enjoying them one more time. And, considering the important role food plays in our enjoyment of the parks, it makes sense that extinct Disney World restaurants would also make that list.

Tastes change and restaurants become dated, but nevertheless, there are a handful of Disney World dining experiences that maintain a large presence in our minds. So, let's hop in our time machine and look at a few of these spots that we'd love to eat at again, just one more time:

Yes, Chef Mickey's is still technically in operation at Walt Disney World, but for anyone who visited the original spot at the Downtown Disney predecessor Disney Village Marketplace, the current iteration of this restaurant doesn't quite stack up.

While the Contemporary Resort's version of Chef Mickey's is known primarily as a spot for character dining, the original location was first and foremost a restaurant. It did offer character dining – and, in fact, it was one of the first dining locations at Walt Disney World to offer such a thing – but it was far more of a novelty than it is now. Instead, the focus was on delicious food, and the story suggested that Mickey himself was cooking it up for you. That's right: Mickey was a rodent chef before it was cool.

The menu itself had some delicious American standards, with the prime rib being a particular standout. And, memorably, Chef Mickey's allowed guests to keep their iconic red drink cups – a souvenir from a wonderful dining experience.

The reason we'd love to visit this spot again is not as much the food as it is the simplicity of the dining experience. This was character dining back before such a thing became a codified part of the Disney ethos. It was simpler and yet also more intimate – just the kind of thing you'd want from a one-more-time dinner.

4. Top of the World Supper Club

In the early years of Walt Disney World, the property featured three resort hotels – the Contemporary Resort, the Polynesian Village Resort, and Fort Wilderness. And, as part of its attempt to be a singular vacation destination, they made sure all three had specialty dining experiences. Specifically, they made sure each had a kind of dinner show.

The Polynesian had the utterly unique Tropical Luau show, while Fort Wilderness had the wildly popular and long-running Hoop-Dee-Doo Musical Revue. But while those two dinner shows made perfect sense given their resorts' respective themes, the Contemporary was a bit more challenging to program for. After all, what kind of show do you put inside an ultra-modern hotel?

What Disney landed on was rather interesting – in the resort's first decade of operation, the Contemporary housed the Top of the World Supper Club, a sort of restaurant/nightclub on the top floor of the resort that featured touring celebrity performers such as Phyllis Diller, Sammy Davis Jr., and Rosemary Clooney.

It was a sort of glamorous, Vegas-style affair that was decidedly adults-only – a nice respite from the rest of the family-friendly offerings on property. But, eventually, this format was swapped out for a more wholesome Broadway-style show. And then, in 1993, it closed to make way for the exquisite California Grill.

But, given the opportunity, it'd be hard to turn down the offer to experience a star-studded show atop one of Disney's most iconic venues.

I have an autograph from Chef Mickey from 1991!

Julie M I always thought that since Sleeping Beauty took place around the 13th or 14th centuries and Cinderella took place in the 18th century that it meant that King Stefan was one of Prince Charming's ancestors.

And when WDW opened they also had The Golf Resort now known as Shades of Green. It used to have an AMAZING restaurant called The Garden Galley. I have a copy of one of the first Disney cook books and it had recipes from both Garden Galley and King Stefan's I STILL use some of those recipes today.

I used to eat in the BACK of the Odyssey... in the cast member cafeteria! WDW College Program 2000 - Tapestry of Nations Parade

I miss the character breakfasts in the Empress Lily! I still have a few of the flags they handed out to kids who ate there... Still feel sad every time I walk by Fulton's.

The one I really miss is King Stefan's Banquet Hall - in the Cinderella Castle. Yes, it was always surprising that a character from Sleeping Beauty would reside in a castle for Cinderella - but the food was excellent....not to mention the pewter! We drank from pewter goblets, ate off pewter plates. I've since eaten at Cinderella's Royal Table, but really, it pales in comparison.