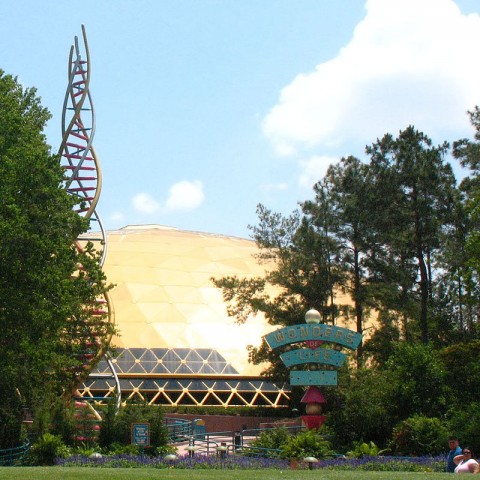 Change at Epcot is inevitable. With an entire half of the park named Future World, one must expect things to evolve over time to keep up with our ever-changing world. Though it was tough to lose classic attractions like World of Motion and Horizons to things like Test Track and Mission: Space, these new rides have helped inject a new kind of energy into Epcot, even if they aren't exactly keeping with the same optimistic, forward-thinking spirit that guided the initial Future World project.

Though you may or may not like the direction that Future World is going in, the closure of an attraction at Epcot has historically meant that something new is on the way. However, there has been one very pronounced instance where this was not true: the Wonders of Life pavilion. This collection of attractions under a single golden dome had a simple mission: to get guests excited about biology, health and their own bodies with blockbuster attractions, shows and plenty of fun, interactive exhibits. 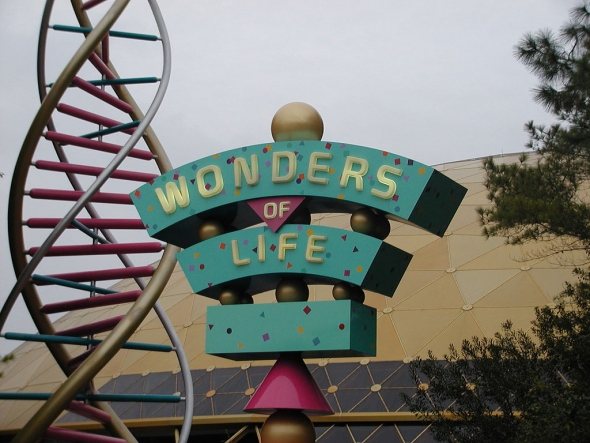 For myself (and many others) Wonders of Life represented the pinnacle of everything Epcot could be as a educational theme park. It was educational and accessible to both adults and children without being condescending to either and had a variety of truly classic attractions, many of which became fan favorites over the years.

Though Wonders of Life had a strong start and certainly attracted plenty of guests over its 18 years of operation, this story is ultimately a tragic tale that not only covers the unfortunately all-too-rapid decline of Wonders of Life, but also its subsequent closure, abandonment and decay. But before we skip to the sad parts, let's take a look at what made Wonders of Life so special in the first place... 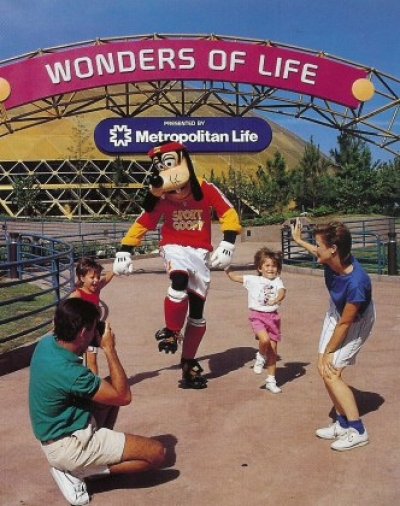 The idea of a pavilion devoted to health and fitness dates back to the original concept of EPCOT, but no corporate sponsor could be found prior to the park opening in 1982 to cover the costs of such a pavilion. However, eventually MetLife stepped in as sponsor, and Wonders of Life opened officially on October 19, 1989, completing the Future World concept only seven years after the park first opened. In addition to becoming the last piece of the Future World puzzle, Wonders of Life also has the distinction of being the last pavilion ever built that was an original, non-replacement attraction in Future World as well.

At a reported cost of $100 million, Wonders of Life certainly wasn't cheap to build, but at the time MetLife was committed to maintaining their big investment at EPCOT. On opening day MetLife CEO John Creedon spoke about how the pavilion would "continue the MetLife tradition of educating the public about good health and healthy lifestyles", and then added that "through Disney's entertainment magic, our pavilion will continue to do that through the 21st century." 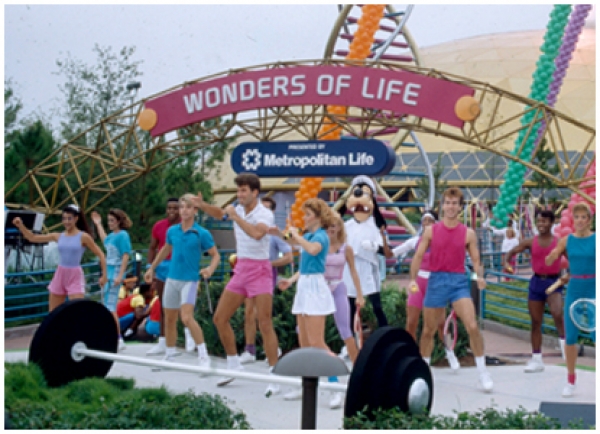 MetLife's commitment to maintaining Wonders of Life was certainly a big one, as the nature of the life science field meant that this pavilion needed regular updates. However, in those early days MetLife was able to step up to the plate and for a long time the Wonders of Life pavilion was one of the most well-maintained in all of EPCOT.

Much like other EPCOT pavilions at the time, Wonders of Life was not an attraction unto itself, but housed many different exhibits, shows, and rides, each with its own unique purpose and function. Though not every attraction was a standout, here are some of the classics that helped define this pavilion as one of EPCOT’s best. 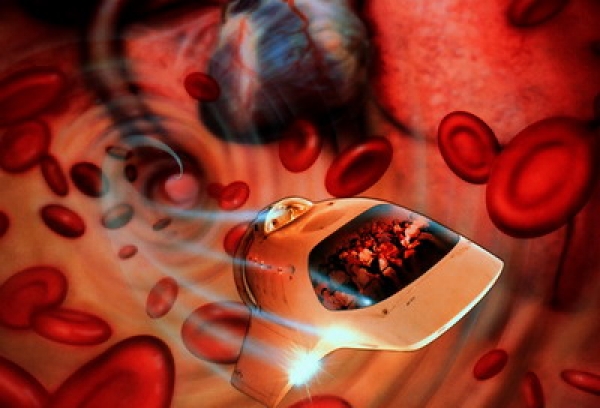 Whenever anyone talks about Wonders of Life, fond memories of Body Wars are normally the first thing that comes to mind. Body Wars was unique as it was EPCOT's first true “thrill” ride, and was the first attraction at the park to carry a height restriction (guests had to be 40 inches to board the simulator).

The ride itself was very similar to Star Tours, which had opened at Disneyland Park two years prior, and would see a Walt Disney World opening later that year in December 1989 at Disney-MGM Studios (in fact, MetLife demanded that the opening of Star Tours be delayed until after Body Wars' debut). The central concept of the ride was not unlike 1966 film Fantastic Voyage, which predicted a future where humans could shrink themselves down to a cellular size and interact with human bodies. As the ride had plenty of science fiction elements, it was right at home in Future World, but what made Body Wars such a standout attraction was the factual way it presented information about human bodies. 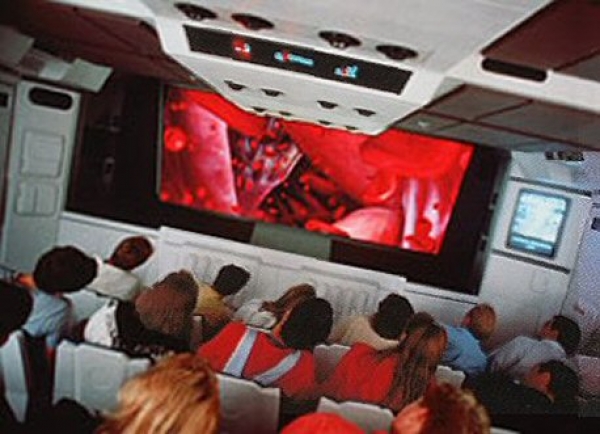 The story involved rescuing researcher Dr. Cynthia Lair, who had been studying the immune system's response to a splinter, and needed to be retrieved. However, as things tend to do during rides, things go horribly wrong, and riders end up following the wayward Dr. Lair as she gets sucked into a capillary, into the heart and then into the volunteer’s lungs where she is attacked by a white blood cell. After the cunning use of conveniently-equipped lasers to stun a white blood cell, riders are informed that there’s not enough power to beam back out of the volunteer’s body. However, riders are then reminded that the brain has electrical impulses that can be used to refuel their power cells. After a trip across the blood-brain barrier, the vehicle is recharged and riders are safely beamed outside the body and are able to disembark. 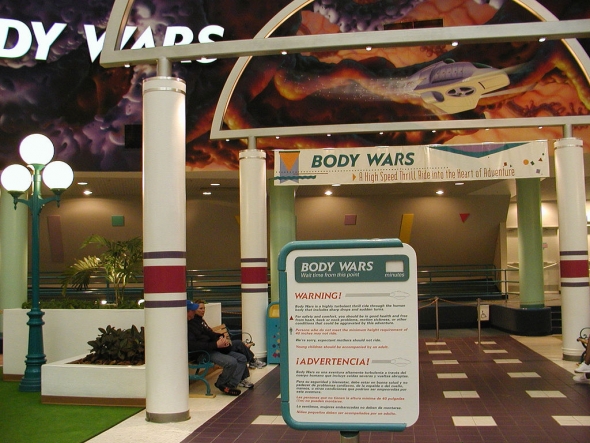 Though Body Wars may not be as well-remembered as Horizons or the original Journey Into Imagination, it represented the best of EPCOT, combining action and education in a way that was never quite able to be duplicated. Chasing down a trapped scientist through the circulatory system while going up and down in a simulator certainly provided thrills (and certainly got attention), but Body Wars was unique as it also helped guests appreciate the intricacy of the human body on a level that was truly thought-provoking and made something as simple as the nervous system exciting in a way that textbooks or TV just couldn’t.

I can tell you it doesn't just sit around for 2/3 of the year. Hidden in the building are large conference rooms that they hold meetings in and when I was there with my college, some Disney youth to youth programs. It was actually a great space for the youth to youth and professional programs to use.

Well - that's even sadder to hear. I've noticed Disney renting areas of Epcot to "Private Parties". Now that the tickets are up to $125 a day most times - that should include access to ALL attractions -- and after 30+ years of operations; there should be MORE exhibits in the park - not less. Opening Soarin' does not constitute closing The Making of Me; Cranium Command and Body Wars. The park is in trouble. It's only a matter of time that non-locals realize they're being bamboozled and go elsewhere. It will just take a few more years - as "Frozen" fever will last through 2019 or so.

Exactly! Renovating Soarin and making the Frozen ride are a decent start, but the park still needs a lot of work. Universe of Energy and the Imagination pavilions need total overhauls and again, an actual attraction should go where Wonders of Life was. I don't care if they use their characters, but they need to breathe new life into these areas for the money they are charging. Use The Good Dinosaur for The Universe of Energy and use Inside Out to re-launch Wonders of Life. And if they have a new comic book with Figment and Dreamfinder, they can and should revitalize Journey into Imagination with those characters and restore the beautiful energy and spirit that the pavilion had when it first opened with the Imagination Lab (imagination is so important to a developing child's mind). It would take some work, some money and some years, but all of it is possible and it would help bring back what makes Epcot such an amazing park: a place where you can learn and be entertained all at the same time! Here's hoping the Disney Imagineers read all this feedback and put some of these ideas into motion. If they could do it with Soarin and the Norway pavillion, they can do it with these pavillions too! :)

Wonders of Life pavilion was a part of my childhood memories. I remember all the rides and exhibits. I loved it! I am glad I found this article, I have always wondered what happen to the pavilion. It's really sad how Disney can waist money on letting buildings or even whole waterparks decade and not do anything with them. We pay good money to get in the Disney theme parks they should be able to afford to rebuild and maintain a pavilion. Being healthy and eating right is a part of our society. They should bring Wonders of Life back!