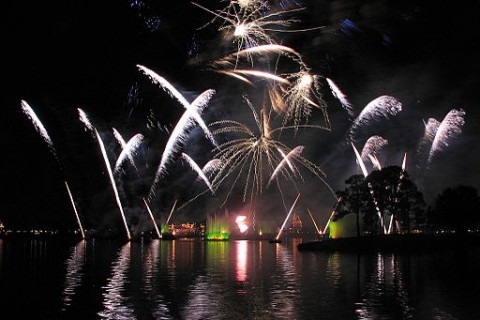 At the end of every night at Disney parks across the globe, guests gather around to watch what has become the signature feature of the Disney experience: The evening spectacular. Each park has its own unique take on it, but they all tend to revolve around the same idea. They have fireworks and projections. They have soaring music and famous Disney characters. They have their special circumstances and features – Fantasmic is more of a stage show, and World of Color is technologically marvelous – but they are all cut from the same cloth.

That is except for one.

In 1982, EPCOT Center opened at Walt Disney World in Orlando, and from the beginning, it was a different kind of theme park. While Disneyland and the Magic Kingdom before it told fantastic stories of pirates, rocket ships, and princess, EPCOT Center was devoted to a realer kind of magic. It celebrated innovation, invention, and the human experience. Its pavilions honored not just the intellectual hunger that has led humanity to invent things such as phones, the internet, cars, and agriculture, but also the desire to connect with one another. And, indeed, that is the thread that has always linked the varying parts of EPCOT Center (now, simply, Epcot): We – that is, humans – will always strive to work together and experience the world as one.

Those are complicated ideas, and as Epcot grew into those ideas, Disney realized that its traditional fireworks bonanzas, amazing though they are, simply wouldn't fit in. Thus, a different kind of show was conceived; that show wound up being Illuminations.

Let's take a moment to look at our beloved and delightfully odd show – where it's been, where it is, and where it might be headed.

1. The history and the idea

Disney first realized it needed a different kind of nighttime spectacle with the opening of Epcot, but it wasn't entirely sure which route to follow. The first six years of the park's existence, Epcot cycled through a handful of shows that never quite stuck. Early shows such as A New World Fantasy were far more like the Seven Seas Lagoon's Electrical Water Pageant than the Illuminations we know today. They were set to highly synthesized music and usually featured classical music and projection screens. They were also presented almost entirely to guests in the area from Mexico to Canada, limiting not only the area , but the scale of the show.

From there, Disney tried to step things up and developed its first laser light show, Laserphonic Fantasy. It was essentially the same show as its predecessors – featuring largely the same music -- although it included plenty of fireworks and lasers. And, in many ways, Laserphonic Fantasy was the forefather of the modern Illuminations.

Eventually, Disney decided to try something new and went out in search of a show that tied in more clearly with the park's messages and themes. And so, in 1988, Illuminations debuted.

2. The pavilions and the lights

Illuminations gave Disney a few new opportunities to rethink their own approach to evening show design. Up until this point, Disney's main storytelling devices were overhead fireworks – which, obviously, are wonderful. But given a new park, one that was intended to always look into the future, they wanted to try something new.

In this manner, the original version of Illuminations delivered. Its most important innovation was that it was a show performed in the round. Unlike the Magic Kingdom-style shows where guests look up above the main castle for their entertainment, Illuminations had guests stand around a central location looking not just at the fireworks, but at each other too.

And, secondly, there were the lights on the pavilions themselves. Unlike previous attempts at creating a nighttime show, with Illuminations, Disney decided to make the countries the real focal point of the show. And so, each country played a role in the show – adding an element of spectacle to the already amazing event.

When all of these elements combined, the result was a truly innovative production. Sure, it was also an extremely 1980s-y production, but it was innovative all the same and an enormous departure from what Disney did at the time. This willingness to explore new things beyond the proven Disneyland-style is what ultimately defined Epcot and led Walt Disney World to become the massive resort it is today. The original Illuminations was simply the perfect embodiment of that – lasers and all.