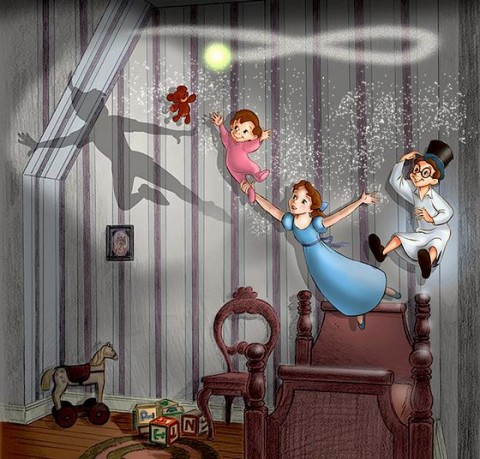 In the world of Disney Parks, there’s one element that it all comes back to: storytelling. Now, a new tool is becoming part of Imagineering's toolbox. Historically, Disney rides tell beloved stories – both original and well-loved – using magnificent physical sets (think Haunted Mansion) and outstanding Audio Animatronics figures (think Pirates of the Caribbean) that bring stories to life and surround us in the settings and characters we love.

But throughout the 2000s, a new technology began to creep into Disney Parks: projection. The simple idea of projecting images has always been a part of entertainment. But now, Disney is incorporating this technology through texture-mapped systems. Think, for example, of the castle shows performed at Magic Kingdom or on Disneyland’s “it’s a small world” where images projected onto uneven surfaces (like castle turrets) look like a smooth, consistent image to onlookers standing at the right vantage point.

Here, we’ve collected eight attractions that have incorporated projection technologies with the hopes of improving and expanding upon the stories told. The question is, does this new projection initiative spell doom for classic rides? Or is this technology a smart and innovative way to “plus” existing attractions to keep them current while maintaining what makes them classic? Let us know…

Location: Disneyland Park
The Effect: A Wonderland that goes on and on
Video: An "after-and-before" of the ride experience with projections on the left.

The original Alice in Wonderland dark ride debuted in Disneyland’s Fantasyland in 1958, just three years after the park’s opening. Like the rest of Fantasyland, it was given a massive overhaul in 1983 and updated with several new scenes. In 2014, with Disneyland’s 60th Anniversary fast approaching, rumors began to swirl that the Fantasyland classics from Walt’s era would get another facelift, each injected with a bit of modern innovation and technological wonder.

Alice In Wonderland was the guinea pig. Using new, sophisticated projections and 21st century lighting effects, the world of Wonderland got a little deeper. Right away, guests press through the door to Wonderland and witness a field laid out in front of them with Alice chasing the White Rabbit. Throughout the ride, projected flowers exist right alongside animatronic ones, extending the world and creating a more kinetic and fluid experience. The Cheshire Cat’s camouflage looks wildly realistic. Static set pieces were replaced by animated Cards.

Altogether, Alice in Wonderland’s thoughtful renovation set a precedent: the technology incorporated was purposeful. It enhanced the experience. What should’ve been maintained was, and where improvements were possible, projections did the job. The result is a ride still as classic as ever, but infused with the best technologies that 2015 could offer; a roadmap for other renovations.

Occasionally, Disney will give its coasters a good tune-up. And then some. In the case of Big Thunder Mountain, that meant completely closing the E-ticket attraction for 14 months beginning in 2013. Disney’s team then completely dismantled the coaster, had entirely new track pieces fabricated, and then put the ride back together from scratch. (Imagine your local park demolishing a ride just to rebuild it exactly in new materials, all in the name of the guest experience and upkeep.)

The talk of the town, though, was the ride’s explosively improved finale. The third of the coaster’s three lift hills has always been concealed inside of the mountain’s core. For most of its life, that final lift hill was filled with large red rock pieces that rumbled and shook as if the train were caught deep inside a tunnel during a devastating earthquake. The effect was a humble piece of Imagineering that was exhilarating when the ride first opened in 1979. But more was needed.

Now, when the train enters that final lift, it’s still caught in a catastrophe. But this time, it’s not an earthquake. The entire length of the lift hill’s tunnel has been mapped for projection, beginning at the base where a spilled and flaming lantern has lit trails of fuses. The train presses on up the lift as the threatening sparks chase right alongside, each igniting TNT tucked into the mountain’s walls. The explosives blast one at a time, expelling smoke onto the train until they finally meet at the mother lode atop the lift hill. When it blows, the mountain rumbles and a massive bank of pressurized fog blasts at the train, enveloping it as it crests the hill and continues along the snaking course.

So far, the explosive finale is exclusive to Disneyland Park and Disneyland Paris, though we should hope the other two Big Thunder Mountains in the world follow suit. It’s a wild finale, and just like Alice, it’s a genuine improvement, not just a change for the sake of change.

Location: Disneyland Park
The Effect: Three doors lead to your destiny... if you keep your eyes closed.
Video: POV of the ride with the Visions of the Future path selected

The Disneyland exclusive Modern Marvel: Indiana Jones Adventure - Temple of the Forbidden Eye is, without a doubt, one of the greatest examples of theme park storytelling on Earth. As the legend goes, the ancient forgotten Temple was built to honor the lost god Mara. Any who made the pilgrimage to Mara’s temple would earn one of three gifts: timeless youth, earthly riches, or visions of the future. But the legend also warns: anyone who looks into the dark and corroded Eyes of Mara will… well… Don’t look.

It’s a chilling tale that sets up one of the greatest effects in Disney Parks. On board old converted troop transports, guests turn the corner from the loading station and face three locked doors – one for each gift. Mara announces which gift he’s selected for riders. The corresponding door glows, unlocks, and swings open into the Hall of Promise with Mara’s glowing eyes tempting them to look. That Hall of Promise is personalized to each of the doors, so every “path” is a different experience.

Of course, the whole effect is achieved pretty simply. There’s really only one path and one working door. The other two doors are just props. The ride used to give the appearance of three different paths by physically rotating the massive set to make it seems as if guests were traveling through the left, center, or right door, with the lights and props in the Hall of Promise quickly adjusting to match the selected door. Unfortunately, that staggering and completely convincing effect ranks among our list of 13 Abandoned, Broken, and Canceled Special Effects at Disney Parks. Luckily, that fresh projection technology allows the Chamber of Destiny and the Hall of Promise leap forward to the 21st century.

I am ok with it as long as they still make physical set and animatronics. Little Mermaid could use an enhancement with this technology because Ariel's face just doesn't look right. It is alright to use when needed, but not everything has to be so animated in the face. Still allow some good ole audio animatronic figures without projection faces here and there.

I love how the Imagineers only use projections to enhance their rides, not make the ride. a good example is CGI in movies. Mostly its used for most of the scenes and effects in a movie, but some movies stay old school and use practical with CGI where it is needed. Very subtle, and very nice. Nothing like "fast and furious: the ride"...

I loved the new additions to Alice and Thunder Mountain, and can't wait to see the upgraded Matterhorn and Peter Pan!

I think projections are a fantastic addition to the Imagineer's toolbox, and I have no problem with older attractions being plussed with new technology. The parks aren't museum archives, after all. It's all about story and immersive environments for me. More projections, please!