6 INCREDIBLE Theme Park Entry Lands That Prepare You For Adventure 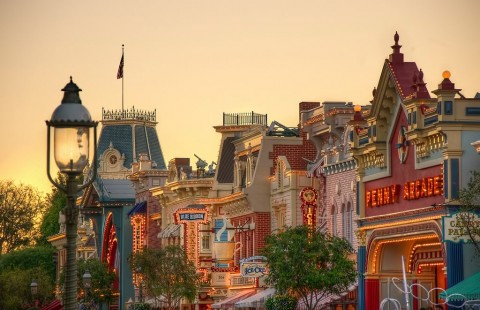 Before Disneyland, most amusement parks were free-to-enter trolley parks or boardwalks with multiple, un-gated entrances. Only those who wished to actually ride needed spend money on ride tickets. Anyone else could stroll on in for free. Walt’s plans for Disneyland changed everything. First, the idea of creating a single entry / exit gate for guests and charging a modest entry fee helped deter troublemakers and unattended youth from entering.

Second, the single entry was the literal backbone in the hub-and-spokes layout Disneyland pioneered – all guests would be directed through the entry land and inward toward a central hub (usually reigned over by a memorable park icon). From that hub, the rest of the park’s themed lands would radiate outward, like spokes on a bicycle tire. This layout assured that traffic would flow logically around the park while also ensuring that any two points in the park were never too far away from each other via the hub.

Ever since, the radical design has become standard, and Disneyland’s concept has fueled the design of almost all of its successors. Nearly every major theme park in America today begins with a themed entry land (usually lined with shops and restaurants, short on attractions) that begins the immersion into the setting. Here, we’ve collected six of the best. Plenty more are out there, but we’ve got to start somewhere and these six are perhaps the most well known. Which is your favorite? 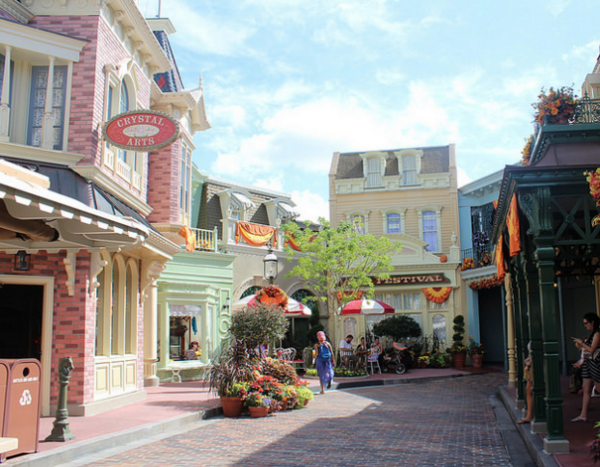 Main Street, U.S.A. is the land that started it all. While its arguably grown beyond his initial intention, Walt was determined that the whole of Disneyland would capture the optimism and joy of America – its roots (Frontierland), its wonder (Adventureland), its dreams (Fantasyland), and the promise of its future (Tomorrowland). The perfect intro to his cinematic and idealized park of Americana was, fittingly, his own nostalgia of America. Main Street, U.S.A. was meant to recreate a perfected and romanticized version of Walt’s hometown of Marceline, Missouri.

Walt also imagined Disneyland as a place where guests were deposited into exotic and immersive locales, as if they’d stepped into his films. Fittingly, Main Street is meant to be the “opening credits,” so the windows of the businesses along the street are famously adorned with the names of those who have kept Disneyland alive. At Disneyland, Main Street is compact, charming, and glowing with Walt’s touch. When recreated at Magic Kingdom, Main Street was built on a much larger scale to account for much larger crowds (and much larger budgets) removing some of the intimacy that Disneyland is so renowned for, but adding greater utility.

A Snapshot of History: Walt believed that the time period of Main Street – the very early 1900s – captured a unique time in history: the brief period when the gas lamp and electric lamp coexisted. Similarly, Main Street is home to horse-drawn carriages and the “horseless carriage” that can whisk guests up and down the street. It seems unlikely that two such unique technologies will be juxtaposed again anytime soon. 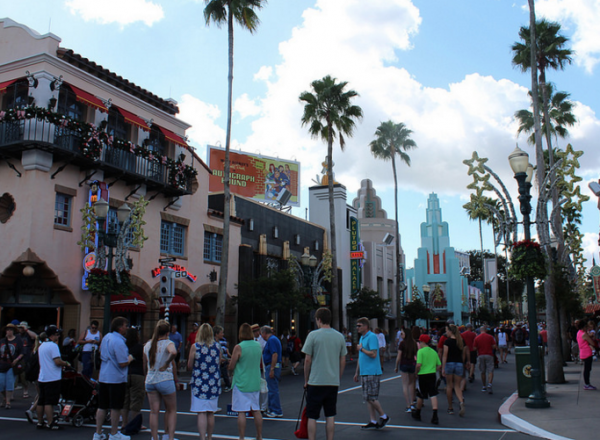 Disney took a break from the dedicated entry land (and from their usual business of immersive and cinematic settings) with 1982’s EPCOT Center, but returned to the fantasy theme park realm with 1989’s Disney-MGM Studios park. Where Main Street built an idealized version of Walt’s hometown, the new studios park would make a logical jump: recreating a romanticized version of Hollywood.

Today, Hollywood Blvd. at Disney’s Hollywood Studios might be among Disney’s most built-out and impressive themed lands, with its art deco and moderne architecture, vibrant “streetmosphere” and glowing neon lights. At the end of the street is a gorgeous recreation of the Chinese Theater, housing the park’s thesis attraction, The Great Movie Ride.

Hollywood, Hatted: From 2001 to 2015, the view of the Chinese Theater’s façade was covered by a 122-foot tall royal blue Sorcerer Hat based on Mickey Mouse’s famous cone-shaped cap in the Sorcerer’s Apprentice. The hat was meant to be a temporary installation to show that Hollywood Studios was the hub for the resort’s 100 Years of Magic celebration. But when the celebration ended, the hat stayed.