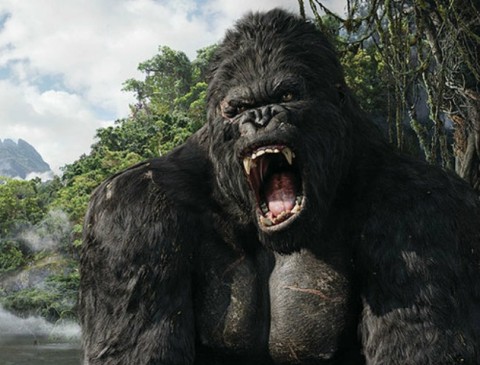 The monkey’s officially out of the bag. One of the worst-kept secrets in the theme park world has finally been announced, as Universal Orlando is building a brand new E-ticket attraction honoring one of its most well-known and beloved film characters. In 2016, King Kong returns to Universal Orlando with vengeance and his own mega-attraction, Skull Island: Reign of Kong at Universal’s Islands of Adventure.

While details are scarce following today’s announcement, we do have a few pieces of concept art and even fewer answers. From a supremely detailed queue leading guests through the ruins of Skull Island to the dark and foreboding mysteries of the ancient temples therein, Universal’s next multi-million dollar expansion to its Orlando resort fits the style we’ve come to expect: larger than life, exactly what fans wanted, and on track to open faster than you’d expect.

We may not have all the answers, but we sure do have a few questions. Below, you’ll find seven questions we’ve got on our minds and the best answers we can manage at this time.

1. Will the ride be mostly screens, or will there be physical sets? 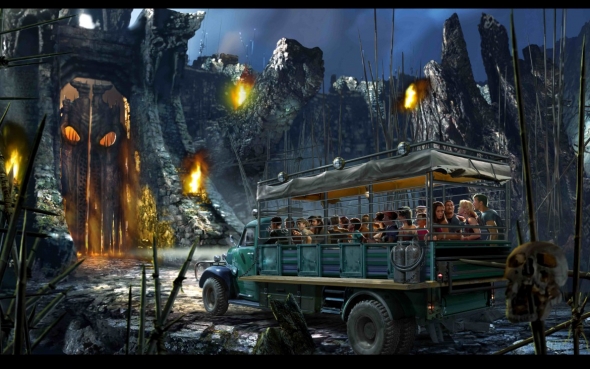 Especially lately, Universal gets a lot of flak for its reliance on screens. Sure, most of the attractions at Universal rely on screens or simulators (usually both). In the more nuanced and beloved attractions, that screen time (pun intended) is shared with physical sets, props, and animatronics that blend seamlessly into the digital creations and build a more tactile world.

We expect that Kong will follow the newer formula of balancing the real and the digital, probably with more of an emphasis on physical sets than we’re used to from Universal. One hint that gives us that impression? The vehicles. The “SCOOP-style vehicles used on other Universal attractions (Transformers, Gringotts, and Spider-Man) specialize in twisting and turning to aim guests’ views right where they need to be aimed: usually, at a specific screen.

But the vehicles used on Kong (above) are more akin to safari vehicles, or the rovers in Animal Kingdom’s Dinosaur or Disneyland’s Indiana Jones Adventure. That means that they’ll probably travel forward along a track with visitors able to see out either side of the open-air vehicles. That probably means more physical sets than screens. Universal has already mentioned that the ride will feature the 70-foot-tall gates of the island that swing open (also above), temple ruins, and “massive” sets. While that's all just marketing, it does hint that sets will take precedence.

2. Will Kong make an appearance in animatronic form? 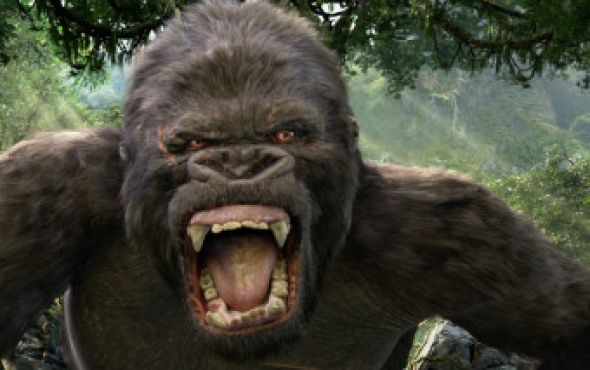 There was a time when a dark ride’s success was directly proportional to the quality and quantity of the animatronics inside. Given today’s technology, rides don’t need any animatronics to leave an impression. However, in our countdown of the top 20 animatronics on Earth, we noted that coming face to face with a physical character is simply more awe-inspiring, emotional, and dramatic than a digital one. Would Jurassic Park River Adventure be as stunning if the T-Rex finale was a projection on a screen?

So will Kong make an appearance in physical form? That's the big question. We don’t know officially and Universal hasn’t outright mentioned it. That’s expected. This early on, they’ve (purposefully) been vague when explaining the contents of the ride. Our guess is that Skull Island will be similar to Forbidden Journey – a mix of stage and screen – with the big guy making at least one appearance in physical form. And according to the reliable Theme Park Insider, you can count on it. (And according to the blueprints they've reportedly seen, a seat on the right side of the vehicle will be your best vantage point.)

3. Didn’t Universal used to have a King Kong attraction? 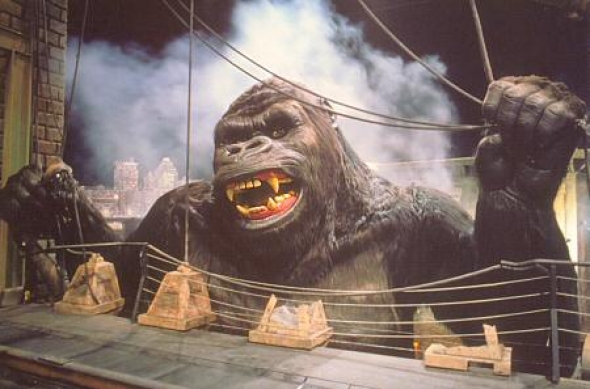 Both Universal Studios Hollywood and Florida each had a King Kong attraction at some point in their histories. In Hollywood, the King Kong Encounter (above) was a short section of the much larger Studio Tram Tour with the tram crossing the Brooklyn Bridge right in front of the 30-foot tall animatronic ape. 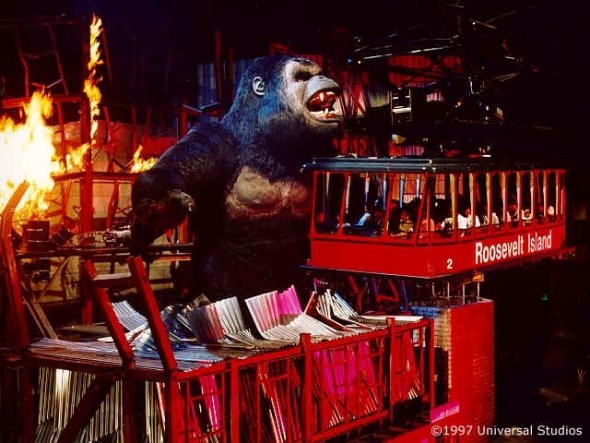 Because Disney had “borrowed” Universal’s concept of a tram tour through famous movie scenes for its Disney-MGM Studios park, Universal was forced back to the drawing board for its Florida park and separated out the famous scenes from its Tram Tour into separate, standalone attractions. So Kong was expanded into his own ride – Kongfrontation – wherein guests were suspended in a Roosevelt Island aerial tram to evacuate Manhattan. Of course, Kong interrupted and riders encountered the massive creature twice during the 10 minute dark ride.

Florida’s King Kong attraction closed to much dismay from fans in 2002 to make way for Revenge of the Mummy: The Ride. Hollywood’s encounter on the Tram Tour lasted longer, but a backlot fire destroyed the Kong figure in 2008. Rather than recreating the 1980s encounter, Universal opted to create a new one…

King Kong: 360 3-D opened in 2010 at Universal Studios Hollywood with the Tram entering a tunnel flanked by 200-foot-long screens on either side (spoiler image here). This innovative experience literally wraps around the entire length of the tram with action all around. Aided by motion simulating elements on the road and special effects in the tunnel, the experience makes visitors feel that they’re falling, racing, tilting, swaying, and being attacked by Kong and V-Rexes.

We've got a few more questions on page two...