5 Disney Attractions that Owe their Magic to their Music 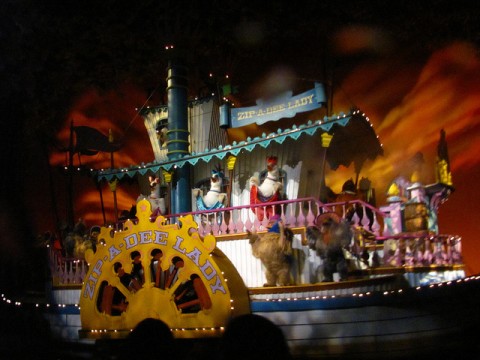 Raise your hand if you’ve ever left a Six Flags and thought to yourself, “Gee, I hope they sell a CD or something with that park’s music on it!” Yeah, probably never.

And yet, there’s a cottage industry among Disney fans for exactly this type of product.

The main reason for this is that the music of Disney’s theme parks serves as important a role as any other element. Just as a roller coaster is incomplete without a lap bar, a Disney attraction is incomplete without music of some kind. On some attractions, its purpose is mostly as background noise designed to make the dialogue and imagery pop. On others, it’s the central focus.

In fact, there are a handful of rides and shows that, in the opinion of this writer, owe much of their success to the musical compositions put to use within them. That’s not to say they’d be poor attractions without their signature tunes, but rather, the music is the most important factor in elevating them from merely good experiences to great ones.

Let’s take a look at these attractions, starting with arguably the most famous and beloved of them all:

There are so many elements in play that make the Haunted Mansion so iconic – the simple and foreboding ride vehicles, the perfectly creepy architecture, the brilliant use of animatronics and illusions, and the positively genius script all intertwine and interact in such a way that it’s impossible not to ride without feeling just a tiny bit creeped out.

But while all of that is amazing – the script singularly so – I think no one element is more valuable than the ride’s signature song, “Grim Grinning Ghosts.”

Disney’s rides tell a story: They have a beginning, a middle and an end. They increase tension over time, and they (usually) build to a grand climax. The Haunted Mansion is special in that it not only does this thematically, through design and plot, but it does so sonically as well. “Grim Grinning Ghosts,” written by Disney composer Buddy Baker with lyrics by the brilliant X. Atencio, begins with a sonorous, droning organ playing out of tune and, as the show’s energy builds and the ghosts appear before the guests, it coalesces and resolves itself into an eerie melody.

And, at that point, the clever lyrics kick in and the ride shifts into its highest gear.

The musical experience of the Haunted Mansion works because it fits in perfectly with the world of ride itself. The music is diegetic, meaning it’s not meant as any sort of a subconscious signifier. We hear it and it’s part of the story. And it, like the doombuggy, carries us along on our journey to encounter the supernatural.

Pirates of the Caribbean is inextricably linked with the Haunted Mansion in that both attractions are attempting to accomplish a similar feat. With the Haunted Mansion, Imagineers wanted to bring guests inside a haunted house and show them the kinds of magic they are used to seeing on the silver screen. With Pirates, the goal was to take guests inside the world of the seagoing outlaws, again letting them experience something they’re used to seeing on the screen.

And so, it should come as no surprise to learn that both use a similar strategy to achieve a similar goal – they accompany perfect scenic design with a now-famous song.

“Yo Ho, A Pirate’s Life for Me,” written by the masterful George Bruns and X. Atencio, is Disney at its atmospheric best. While the song recedes into the background a bit more than “Grim Grinning Ghosts,” it is still very much an important part of the story and provides guests a more subconscious way of interpreting the action depicted in front of them.

The song’s merry vibe is crucial in this capacity. The animatronics themselves are performing rather violent and uncomfortable actions – things like auctioning off women and torturing the town’s mayor. With the wrong tone, Pirates wouldn’t just be a worse attraction, it would be downright problematic.

And yet, for whatever reason, “Yo Ho, A Pirate’s Life for Me” seems to dull the edges on all of that. Perhaps it’s the jolly attitude of its singers, or the cute touch of having a dog bark along with the beat, but it somehow works to remind you that what you’re seeing is not only fictional, but OK. Its jovial, carefree attitude is infectious and, when you hear it, you can’t help but think it’s the life for you too.

You know, without all the violence and theft.

Number 1 should be It's A Small World. Who doesn't have that song in their head for the rest of the day! And what about There's a Great Big Beautiful Tomorrow. Those are two very iconic rides.