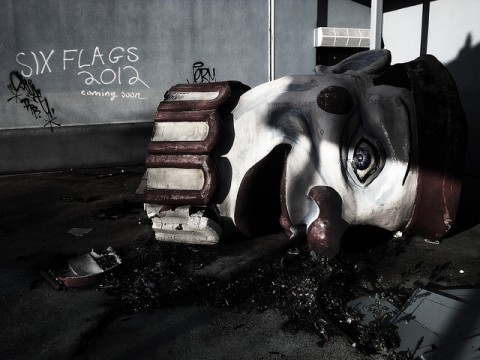 Arguably one of the most photographed abandoned amusement parks of all time, Six Flags New Orleans has captured the imaginations of people around the world.

There is something about amusement parks that speaks to the inner child in all of us, and seeing one left to rot is always emotionally touching. But on the rare occasion that an amusement park is not closed due to low attendance or because something bigger and better just moved in, but instead is cut down in an instant at the height of its glory, the remains become truly haunting. 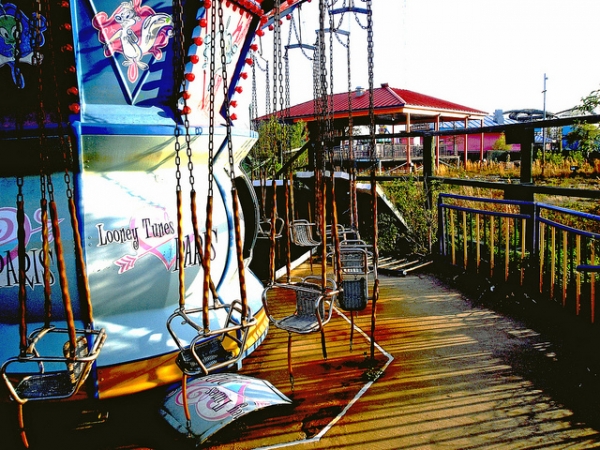 It happened with the Pripyat amusement park in Ukraine, opened for only a couple of hours before closing forever due to the 1986 Chernobyl disaster. And it happened with Six Flags New Orleans, which closed its gates ahead of Hurricane Katrina in 2005, never to reopen. As tragic as Pripyat is, at least its permanent closure is understandable, as radiation levels are only now receding to the point that guided tours are permitted inside the Exclusion Zone. But what about Six Flags New Orleans? The floodwaters receded nearly 10 years ago. Why has nothing been done with the property since then?

The answers are complex and confusing, hidden in the storied culture and unusual politics of the City That Care Forgot. While we might not reach a satisfactory conclusion, let’s dig through what we know to better understand this most unlikely of amusement parks and what its future might hold. 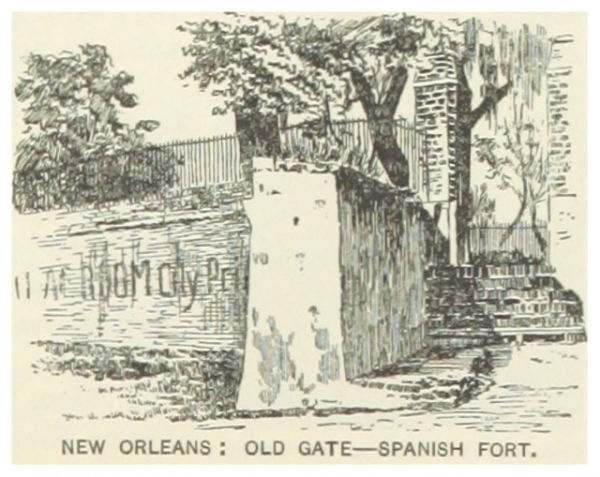 French explorers arrived in the area that would become La Nouvelle-Orleans, or New Orleans, in the 1690s. They settled along the banks of Bayou St. John, which was already an important Native American trade route due to its natural flow into the Mississippi River. In 1701, the French established a small fort to protect their encampment from Spanish invasion. The city of New Orleans was founded by the French in 1718.

The fort did little good, however, as the city of New Orleans passed to Spanish control in 1763 under the Treaty of Fontainebleau, which was reaffirmed by the Treaty of Paris. The Spanish replaced the small wooden fort with an imposing brick structure, which they named San Juan del Bayou. New Orleans returned to French control in 1800, but was sold to the United States in 1803 under the Louisiana Purchase.

In 1823, the fort, now known to locals as the Old Spanish Fort, was decommissioned and the land sold to private developers. Connected by steam railroad and, later, electric trolley, to the city’s then-excellent public transportation network, it was a natural spot for one of the scenic retreats that were popping up all over the United States at that time. 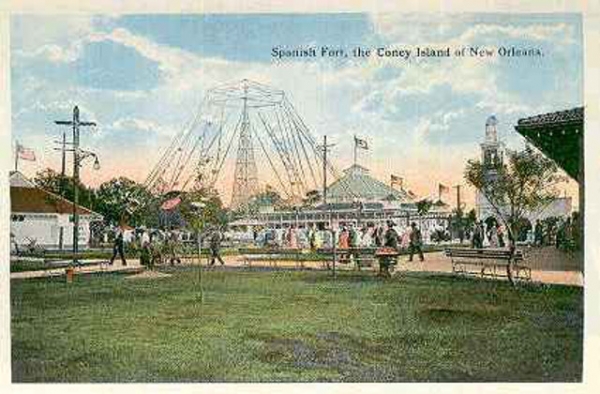 The first hotel in the region, the Bayou St. John Hotel, opened on the site in 1823, and was later sold and renamed the Spanish Fort Hotel. Over time, the Old Spanish Fort added a casino, a theater, several cabarets, some fine dining restaurants, and a dance pavilion, along with a full-scale amusement park. It soon became known as “The Coney Island of the South,” drawing not only locals but tourists from across the country.

Today, Old Spanish Fort is arguably best remembered for its contributions to Jazz music. The surprisingly integrated amusement resort was a natural gathering spot for musicians of all races and ethnicities, who spent long hours playing together, sharing techniques, and performing for the crowds.

Another, somewhat more fashionable, resort opened at West End (modern day Lakeview) on the banks of the New Basin Canal shipping channel in the 1870s. West End added an amusement park in the early 1900s, while much of Old Spanish Fort was destroyed by a fire in 1906. The owners rebuilt, and the two resorts competed for business until the 1920s, when city reclamation projects destroyed much of West End and moved Lake Pontchartrain’s shoreline away from Old Spanish Fort. Both resorts closed soon after. 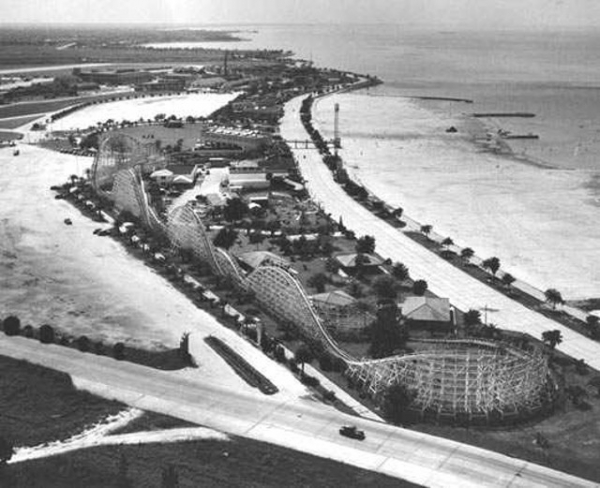 Pontchartrain Beach opened in 1928 across from the Old Spanish Fort, but both the site and the timing proved to be poor. Thanks to the reclamation project that moved the shoreline and the onset of the Great Depression, the amusement park was never profitable, and it soon closed.

In 1939, however, Harry Batt was ready to try again. His family owned the ice manufacturing plant that had supplied ice to the Old Spanish Fort, and he knew an amusement park in New Orleans could be a major success. He moved the location to the foot of Elysian Fields in the former Milneburg neighborhood on the east side of New Orleans.

Pontchartrain Beach flourished in its new home. The thoroughly modern park was filled with exciting roller coasters, family-friendly flat rides, carnival games, and foods of every description. Visitors could also enjoy the beach and swimming pool, watch free entertainment that ranged from stunt divers to beauty pageants, and take in free performances by up and coming live music acts. Even Elvis Presley made an appearance early in his career.

Pontchartrain Beach is a beloved memory for those who were able to take advantage of it, but sadly, a sizeable portion of New Orleans’ population was excluded from its gates. Jim Crow segregation had taken root. “Separate but equal” was the law of the land. 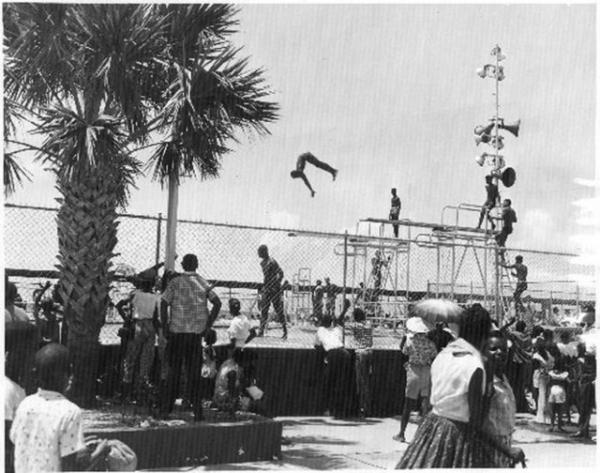 The City of New Orleans opened Lincoln Beach in 1939 as the African-American alternative, also located in New Orleans East. Modeled after Pontchartrain Beach, the amusement complex featured a beach, swimming pool, amusement rides, carnival games, and restaurants. Local musicians played free concerts on a regular basis, including the legendary Fats Domino, Ray Charles, and Nat King Cole. By most accounts, the park was absolutely beautiful, if not as grand in scale as Pontchartrain Beach.

New Orleans was desegregated in 1964. Lincoln Beach closed that year, and Pontchartrain Beach was now open to all. It continued to evolve, adding new rides and amusements, and remained popular through the 1970s. By the early 1980s, however, Pontchartrain Beach was on a steady decline. It closed for good in 1983, leaving New Orleans without an amusement park of its own.