5 Amazing Disney Drinks EVERYONE Should Try at Least Once 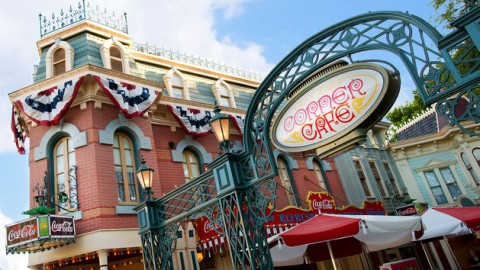 Do you know why a Coke purchased from Casey’s Corner in the Magic Kingdom tastes better than any other Coke you can get anywhere else in the world? It’s the same reason every Disney Parks and Resort's purchase is the best, most satisfying example of its type. Because you are surrounded by bountiful acres and countless well-spent hours of Disney-dedicated brilliance.

Everything within the confines of a Disney property, from the popcorn you can’t resist to the people you encounter to the very air you breathe, is just simply better. Oftentimes, what you acquire is even further enhanced by exactly where you get it. A Coke on Main Street is better than a Coke from Downtown Disney. No offense to the latter, you just can’t compete with certain environs, traditions, views, smells and atmospheric music.

Coke is just an easily identifiable example. Within this sprawling amusement mecca, renowned for creativity, refreshment options are only as limited as the Disney imagination. Augment your already incredible Disney visit with these fantastic family-minded beverages at the following unbeatable locations: 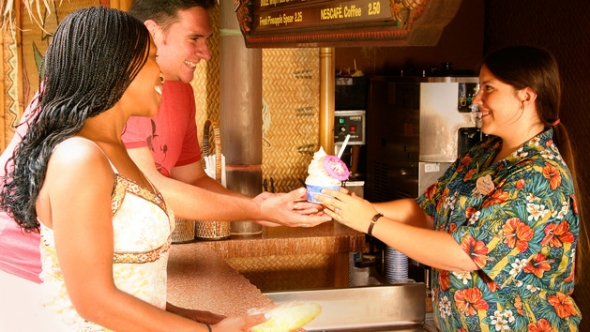 Few dubious endeavors invite the scrutiny of a Disney purist quite like trodding upon, even mentioning, one of the classics. Even while praising this beloved Disney institution we virtually summon disapproving commentary of the a-Dole-Whip-isn’t-a-drink variety. The Dole Whip may not be, but the Dole Whip Float definitely is, and they wouldn’t serve it with a straw if it wasn’t.

With no demonstrable urgency to make this extremely popular signature treat more widely available, at Walt Disney World at least, you can now get a whip at the Magic Kingdom and the Polynesian Resort. Over at Disneyland, Walt Disney World’s older brother, where every similar element, from the Pirates of the Caribbean to the peculiar yellow popcorn, just happens to be better, the Dole Whip is still found exclusively inside Adventureland.

To properly acquire Disneyland’s most coveted refreshment, guests must take advantage of what was once an enviable insider tip. The line for the Tiki Juice Bar, Dole Whip’s sole outlet, consistently rivals that of Space Mountain. Anytime of day or year, in any kind of weather, the craving for inexplicably wonderful pineapple soft serve is undeniable. Rare is the occasion when guests aren’t hopelessly congesting arguably the most traveled Disneyland thoroughfare after the Main Street entrance. In an unfortunate, and equally rare display of poor planning, this is also the site of Disneyland’s most popular restroom. 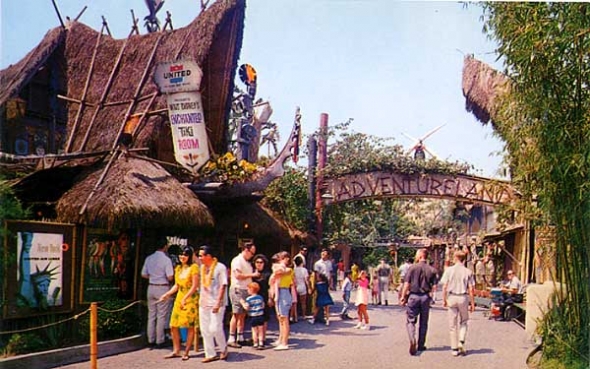 Those set on pineapple-vanilla paradise—and there are many of you—you needn’t surrender to the inexorable throng. Not completely. You are still going to have to weather the crowd a little bit, but if you can get through to the Enchanted Tiki Room courtyard—where people who still favor this attraction go to inexplicably wait for it—there is another counter inside. It’s open and tended a lot more often now, as more guests discover its blessed existence. There’s usually a line inside now, as it’s not much of a secret anymore, though it’s always shorter, and you aren’t out in the press of the walkway, plus there’s the added entertainment of the animatronic tiki totems.

Humble admission: there is a Walt Disney World Dole Whip option that exceeds its west-coast likeness. If you go to the bar in the Polynesian Village, you can get various rum toppers in your float, though this is truly a topic for a separate discussion. 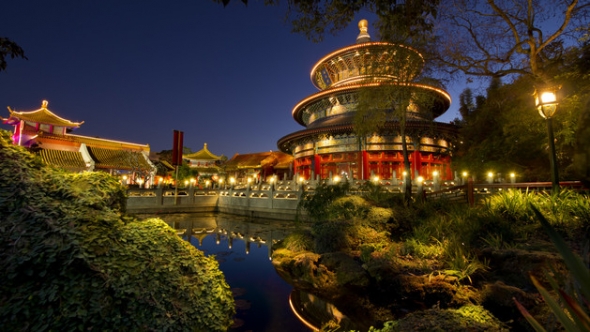 The multifaceted wonder of Epcot’s World Showcase is difficult to describe or properly wrap your brain around. When it comes to a food, feature or culture, it is even harder to pick a favorite. Immaculate and authentic Italian architecture, artisan French glacé avec framboise, moonlit margaritas in Mexico, Canada’s now dearly departed Off Kilter; the magic springs forth from an ineffable confluence of faithful and diverse detail. When in search of a mouth-satisfying World Showcase beverage, again picking is problematic, though impossible to go wrong. The Mango Green Tea makes our list as it is wonderful, of course, and because we had to choose one.

It consists of everything in its name, and if you like traditional Chinese tea, this is not for you. The good news, Joy of Tea has the straight stuff too, which you can enjoy while the rest of your party delights in slushy fruit sweetness. There are those who like to take their meals, and even simply their soft drinks, comfortably ensconced at one of Epcot’s many, extraordinary table-service eateries. Here, too, you cannot go wrong. Though the true joy of World Showcase counter service is the freedom it entails. Sit by the lagoon with your new favorite drink, or amble along the esplanade. Pass through continents of culture as you contemplate whence will come your next creative concoction.

What about the Beverly?

No-jito instead of the mint julep at Blue Bayou and Cafe Orleans? Yes I am biased towards DLR.