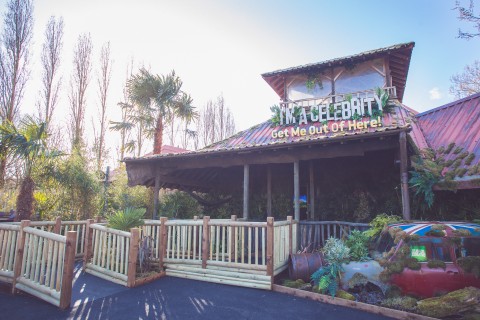 Spring is here, and with it the parks have all officially opened for 2015. Whilst there aren’t any big attractions to look forward to, we have a brand new live-action maze at Thorpe Park, a “third hotel” at Alton Towers, and a yearlong special event at Chessington celebrating all things penguin all to enjoy at the start of this theme park year. 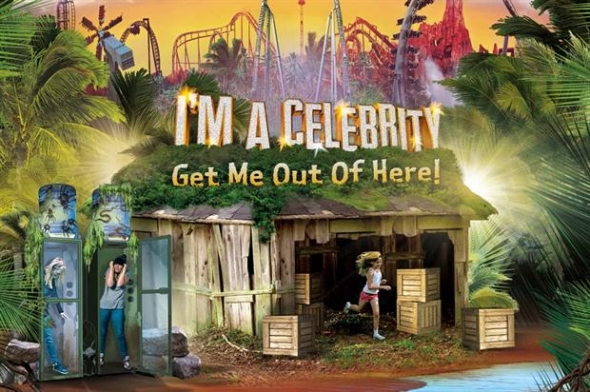 Thorpe Park’s new maze, I’m a Celebrity: Get Me Out Of Here opened on Friday, March 27. Brand new for 2015, this live-action maze is based on the jungle reality TV show of the same name. A brand new take on the walk-through “scare” maze experience of the past, Thorpe Park’s take on an I’m a Celebrity maze seems to be more family-friendly, with bright colours and tropical vibes featuring alongside its seemingly playful creepy-crawly phobia inducing challenges. 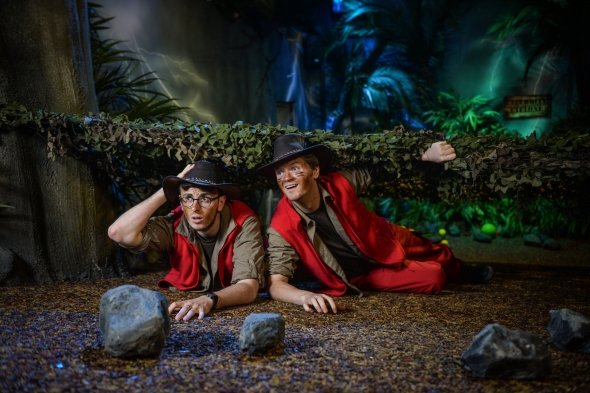 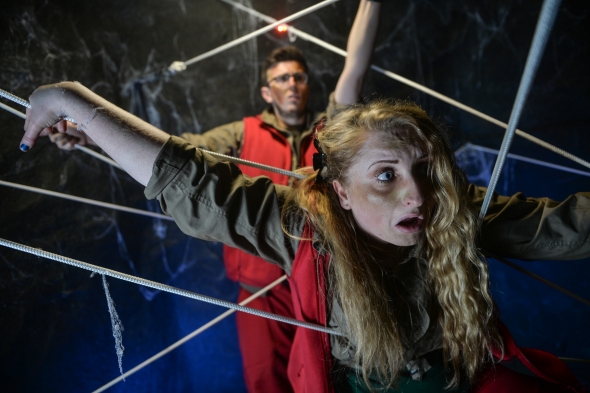 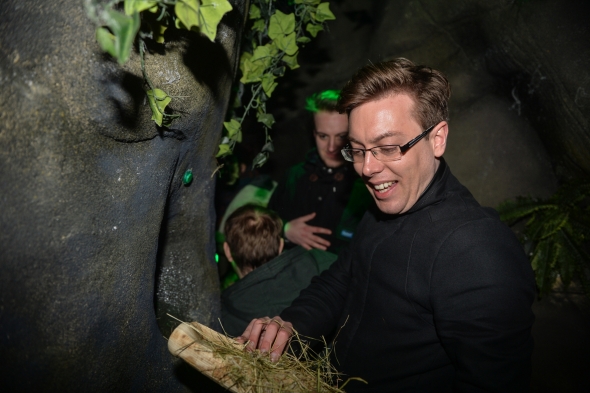 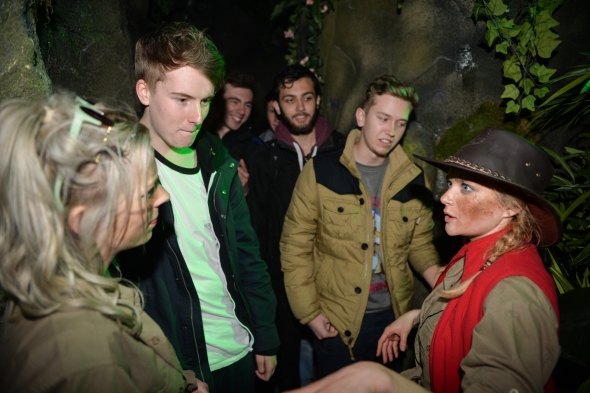 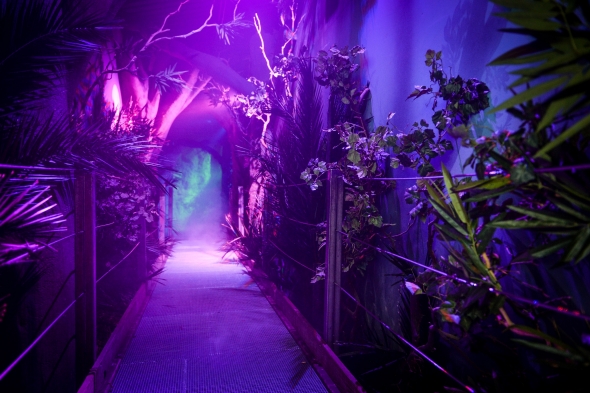 Age restriction-wise, typically this would be “not recommended” up to an age between 12-14 (based on Thorpe’s past years of Fright Night horror mazes), but I’m a Celebrity carries a younger age guideline of 8. Still, the fear factor does depend on the type of phobia held by the guest, as there are a lot of park-goers that will brave any horror maze who don't mind scary actors, fake blood, chainsaws and dark corners, but would squirm simply at the thought of having insects showered over their heads. I’m a Celebrity will play on a different phobia to other live action mazes, and it will be interesting to see how successful this different type of maze experience will be.

Our first teaser for the new 2016 “dark” ride attraction at Thorpe Park has finally made an appearance - a brief line on the outside of the perimeter fencing stating “A Dark Secret is Coming”. Whilst the plans for the new ride were submitted to the local authorities in October 2014, the park has not alluded to a new addition or advertised anything yet. The new attraction will be at least a year away, and a scheduled opening will most likely be for the start of the 2016 season, or nearby (like I’m a Celebrity opening a few weeks after the park’s season has started). So, whilst that seems like a long way off, it’s really only one season they have to promote and construct this brand new investment.

It was always thought that the majority of the marketing for the 2016 attraction would take place alongside the construction throughout the 2015 season. However, due to the central location of the new attraction, the secret cannot be kept that way for long. As we approach April, and the Easter holidays and larger crowds, it would be great to start to see more teasers for the new ride like the first, just acknowledging the fact there is a gaping, empty hole in the heart of Thorpe Park right now, surrounded by jet black fencing.

Thorpe’s last installation, The Swarm winged rollercoaster, appeared on the 2011 park maps as a “new ride coming 2012” - and the location of The Swarm was less obvious, only really visible from Stealth until summer of 2011. It would be good to get this 2016 one on a park map so guests can start to find out that they will have a brand new ride to enjoy at Thorpe next year - especially if the new maze proves to be as popular as they hope and there is indeed heavy footfall in that area of the park, with people head straight past the new attraction construction site towards I’m a Celebrity.

As for us enthusiasts who have known about it for months already, we’re already impatient to see what this dark ride attraction entails, and will surely absorb excitedly every teaser and little piece of information we can as these trickle through social media and the like throughout 2015.

As part of the I’m a Celebrity maze opening, Annual Passholders could be first to try out the new maze at Thorpe Park’s Annual Passholder Preview Event. Traditionally, Passholder Preview Events tend to be whole days at the start of the season, however as Thorpe has opened its gates for 2015 this took place on the evening of the March 26 and keen Passholders had a few hours to get in first before it opened to the public on the 27th.

April looks like it will be pretty quiet for Thorpe as no Easter weekend events have been announced, unlike last year when the successful “Big Easter” event ran, mainly to promote the upcoming opening of Angry Bird Land in May.

Alton Towers opened for the 2015 season on Saturday, March 21, and with it, the park's brand new ride - the Octonauts Rollercoaster Adventure. The Octonauts features as part of the Towers’ ever popular CBeebies Land and is a small expansion for the 2014 Land installation.

The Towers has been advertising a “Big Six” Challenge event. This May, brave guests are invited to take on all six of the park's big rollercoasters in one day - Nemesis, Air, Rita, Thirteen, Oblivion and The Smiler in a new event this spring. Guess we’ll have to head over to the park to find out what exactly it entails. Whilst details have yet to be confirmed, it may be in a similar vein to Thorpe Park’s recent (and successful) “My First Coaster” event, where guests who have just reached the height of 1.4m (minimum height for all big coasters) were given a free entry ticket to Thorpe Park and a special commemorative photo frame of them on their first big rollercoaster.

Riding all the big rides in one day is something that quite a lot of guests will aim to do as part of their visit, and it’s good to see Alton Towers celebrating all of their iconic installations over the past 21 years, and not just focusing on the latest and greatest, or their most famous roller-coaster. Some sort of ticket or wristband system would work best for this “Big Six” Challenge, where guests get a stamp or mark at the station of each attraction, with a reward or certificate if all six have been stamped by the end of the day. Any of these would make for wonderful keepsakes. 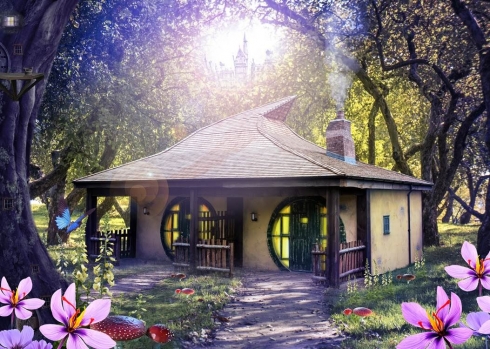 The Towers’ new onsite accommodation, the Enchanted Village, is scheduled to open on the 18th of April. Luxury treehouses and woodland lodges are available to guests happy to pay that little bit more for what looks like it will be an extra special stay. Alton Towers’ earlier two on-site hotels, the wacky, tropical Splash Landings Hotels and the more classic Alton Towers Hotel are renowned for their high quality of accommodation and service, so it’s not wrong to expect the Enchanted Village to be a truly magical and immersive experience (if a very expensive one). 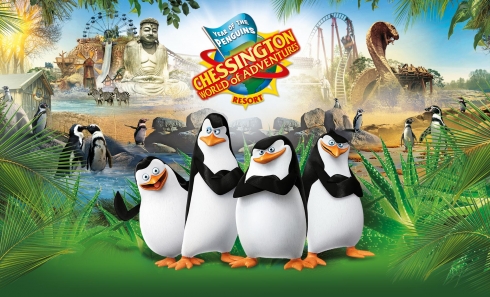 March has come and gone - with relatively quiet opening days for parks sprinkled throughout the past month. Even though there aren’t any special events or big new rides opening this April, we can enjoy the opening of the long-anticipated Enchanted Village and perhaps even indulge in a woodland stay of our own, or head over to Chessington to make a new penguin friend, and mark the start of what will be another wonderful season.