The 8 BEST Disney World Eateries Where the Food Is Secondary 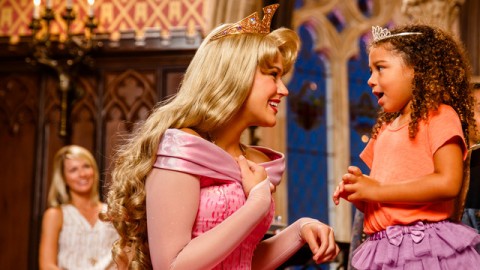 One of the hallmarks of Walt Disney World involves their dedication to whimsy and wonder. Virtually every inch of the various Disney properties features high quality tributes to the iconic characters and themes created by the studio. Perhaps nowhere outside the parks exemplifies this attention to detail better than the dazzling restaurants onsite.  Here are eight of the best Walt Disney World restaurants where the food takes a backseat to the ambience. 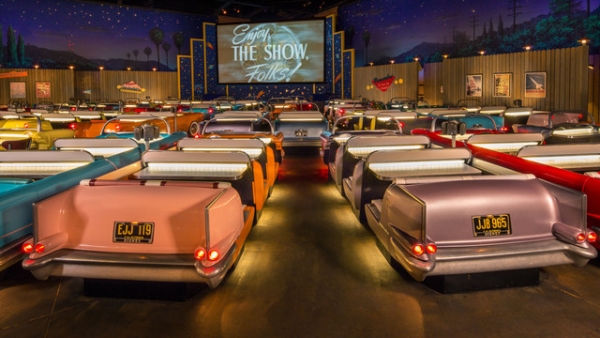 When is the last time you ate a steak while sitting in the husk of a classic automobile? Unless you’ve eaten here before, the answer is presumably never. Sci-Fi Dine-In Theater celebrates the antiquated 1950s drive-in movie experience by providing glorious big screen programming in a darkly lit auditorium filled with scores of cars repurposed as eatery booths. The experience is as jarring as it is invigorating.

Perfectly situated in Hollywood Studios, Sci-Fi Dine-In Theater offers one of the most entertaining restaurant events at any theme park in the world. Clips from classic 1950s B movies provide a throwback feeling to times gone by. They are interspersed with clips from Walt Disney himself, and he is occasionally joined by Garco the Garrett Robot. There is virtually nothing that embodies the 1950s Sci-Fi more than an extremely cheesy robot being treated like it’s Seven of Nine even though it looks more ridiculous than a 1960s Cyberman. The entire meal experience is wonderfully kitschy fun. 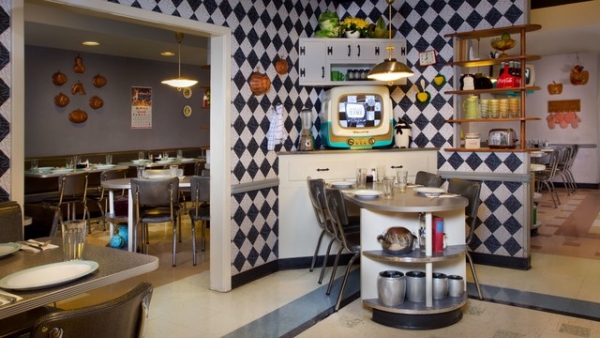 While we’re discussing the 1950s, Hollywood Studios also provides the full Happy Days living room experience with its campy interior design. The stylized tables recreate the period when entire families ate together Donna Reed style, and the full restaurant theme is of a single giant kitchen. It happens to have an angled view of the family television. You can even sit close enough to one to enjoy the popular television programs of the era…including The Donna Reed Show.

Disney further enhances the recreation by training the staff to act like Mom would. So, don’t you dare slouch or even think about leaving food on your plate. Whatever you order, you should expect to finish if you don’t want to get nagged. And while this article is about the atmosphere rather than the food, I will note that the milkshakes at 50s Prime Time Café seem straight out of a malt shop. 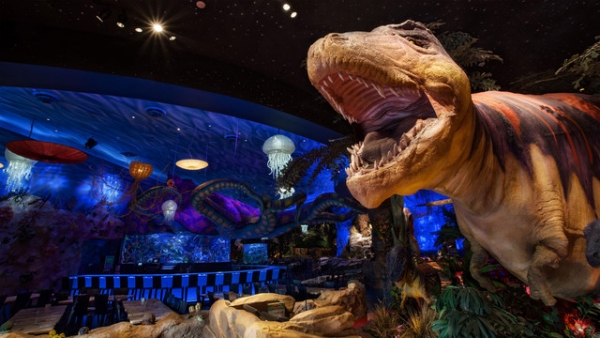 Have you ever wondered how it would feel to eat among the dinosaurs? You can discover the mysteries of these ancient beasts if you choose to eat at T-Rex, a themed dining experience at Downtown Disney from Landry’s Hospitality, the same people who also own Rainforest Café. That restaurant narrowly missed the cut since something else nautically themed is situated in Epcot, but T-Rex is a no-brainer. There is simply no other meal like it in Orlando.

T-Rex features animatronic dinosaurs, wooly mammoths, and a meteor strike. Yes, if you want to re-live the end of dinosaurs as a species, the comet hits every 20 minutes as the lights go down in the restaurant. A thrilling display includes the animatronics coming to life followed by the ground shaking and a re-enactment of the outer space rock assault that created an extinction level event for the dinosaurs. It’s loud, it’s silly, and it’s a joy to behold. 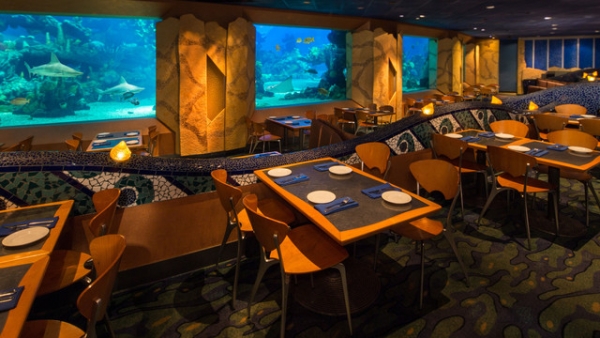 Positioned right beside the Finding Nemo ride at Epcot, Coral Reef is best described as an aquarium with fine dining thrown in as a happy bonus. Suffice to say that the fish on the menu is fresh, but that’s not the attraction at this establishment.

You get to watch the aquatic interactions among colonies of fish. Some of the tables are situated right beside the windows that provide views of The Sea with Nemo and Friends. You can watch the employees submerge to perform mundane tasks, you can pick your favorite sea turtle and watch it perform laps around the area, or you can even follow sharks as they intimidate the other sea creatures inhabiting this massive saltwater environment. If you’re feeling adventurous, there is a chance that you can have Mickey deliver a message as he swims inside the reef, although this practice has become less frequent in recent years. Some people say it’s no longer allowed while others note it’s for special circumstances only.

Coral Reef has the BEST steak I have ever eaten! You could literally cut it with a fork. And the dessert was turtle cheesecake shaped like a sea turtle with a blue coral made of sugar art. It was like something from a 5 star fancy restaurant instead of a theme park. We will definitely be making reservations for our upcoming trip!

Not A fan of the little sea food aquarium, the food is less than secondary and the cost is super high.

Well my favorite restaurant didn't make this list but really should've if we're talking actual Disney restaurants. Columbia Harbour House is a wonderful place to eat. Now T Rex is at Downtown Disney but isn't really a Disney owned restaurant, neither is Splitsville. Doing something like this you should get the facts.

It said Walt Disney World eateries, not Disney owned eateries. The story had the facts right, perhaps you should read more carefully before commenting