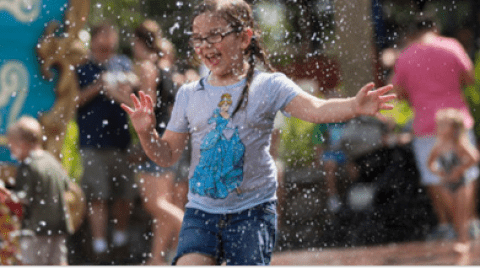 Most Disney World experiences are carefully timed and presented in the same way to every visitor.  Whether you’re riding a mine train, a pirate ship, or a magic carpet, your experience will be identical to everyone else’s.  This is, of course, a big part of what makes the Disney experience so impressive: the perfect alignment of sight, sound, motion, and special effects.

But every now and then – especially when you’re under a certain age – the “wait and then sit” experience gets a little old.  You want to stretch your legs, and, just as importantly, you want to chance to explore on your own.

Luckily, Disney has thought ahead for folks who want a hands-on, bodies-on experience that’s neither preprogrammed nor identical for each visitor.  Many of these experiences come in the form of uniquely creative “playgrounds” where kids and adults alike can climb, slide, explore, teeter, and otherwise follow their own imaginations. 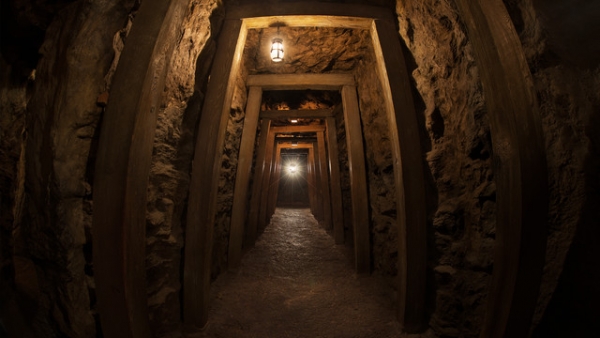 Tom Sawyer Island is a unique part of the Magic Kingdom, because it’s a fairly large piece of real estate set aside for at-your-own-pace exploration and discovery.

You arrive at the pier aboard a Mark Twain-style “wooden raft,” and, unlike other spots in the Magic Kingdom, you’re set loose to explore as you wish, where you wish, at your own pace.  If you take the time to wander the entire island, you’ll encounter two old mills, two creepy caves (one of them inhabited by the ghost of Injun Joe), both a suspension bridge and a barrel bridge, and happen upon an abandoned fort.  There’s even a mini-fort playground for younger kids.

When you’ve exhausted the island’s delights (or your feet), take a few minutes to relax on a rocker, play a game of checkers on the porch, or just enjoy watching the Liberty Belle as it passes by. 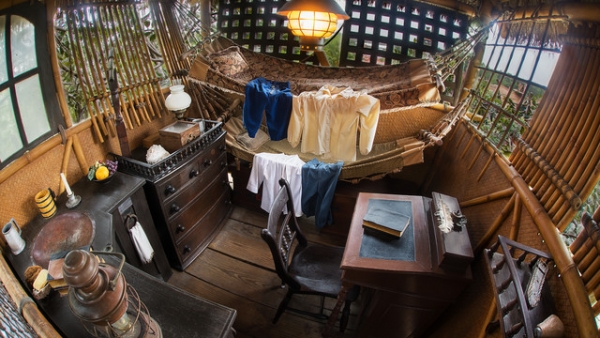 For anyone who’s read the book or seen (and loved) the movie, the Swiss Family Robinson Treehouse is literally a dream come true.  It’s also one of the very few attractions at the Magic Kingdom that is rarely crowded – so it’s a great destination for frustrated kids (and parents) who have had it with long lines and crowds.

A full-scale reproduction of the movie set, the treehouse is made up of a giant tree with branches and “rooms” accessed by “hand-made” stairs. You can take as long as you like to explore (and there’s no one stopping you from going back for a second look once you’ve finished).  Some people do rush through, but it’s worth your while to stop and really look for some of the less obvious details – 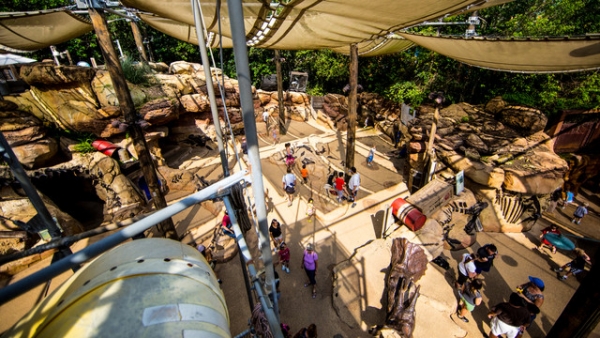 Toward the back of the Animal Kingdom is an amazing, engaging structure called “The Boneyard.”  This is a playground like no other.  Not only is it a great place for climbing, sliding, and generally having physical fun, but it’s also a highly themed paleontological dig where kids and parents can discover and learn a little bit about dinosaur fossils.  Some of the cooler features:

Kids will love the spiral slides and netted areas for climbing; adults will enjoy exploring the amazing Imagineered details.

Where is the Laughing Place located. I don't think I've seen this one before.

Literally UNDER the Frontierland train station. It's tiny.

I would also suggest the Jungle Trek and Forest Trail in the Animal Kingdom,Innoventions in EPCOT, and the Walt Disney museum in Hollywood Studios.

Great additions, Stephanie! You never know what you'll see on the Trek and Trail... one of the highlights of our visit was watching the keeper call the fruit bats in for supper and bed. So cool to watch them respond and make their way along the rope to their quarters.