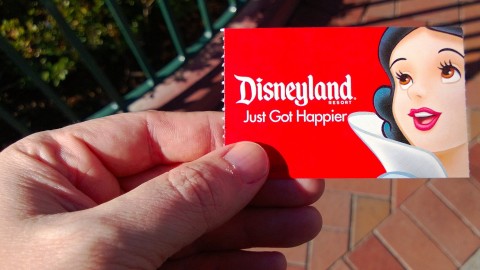 You can act as surprised, hurt, ambushed, and dismayed as you want; but you always knew it was inevitably coming, and here it is: Disney’s next price hike. At both Disneyland and Walt Disney World, the next rise in daily tickets and annual passes has landed and the cries of fans will do little to slow the gradual price increase that’s been a staple of Disney Parks for 60 years.

First, we'll explore the truth behind Disney admission prices: where it started, and what it really meant. Then, on page two, we'll talk about why Disney's ticket price is now - in some cases - more than $100 for a single day. Is it right? Wrong? True? Read on...

If you can imagine, Disneyland was one of the first amusement parks ever to even charge an entry fee. Prior, most were boardwalk-style amusement piers or grown-up trolley parks with no single main entrance that were free to enter with visitors purchasing tickets for each ride. Disneyland changed all that: one entrance with admission gates blocking it. As much as it might not match our kind, grandfather-like image of the man, Walt knew that an entry fee was necessary to keep out troublemakers and keep Disneyland from becoming free babysitting like many local parks were (and some still are...).

Disneyland combined both systems, charging $1.00 for entry then selling ticket booklets for $2.25. Those ticket booklets contained eight ride tickets (A-, B- and C-tickets, with C-tickets necessary for the most impressive attractions, like Jungle Cruise). Additional tickets could be purchased a la carte for 10 - 35 cents each based on their letter (that's about $1 - $3 today).

With inflation, the price of admission and eight ride tickets would be about $29.00. Remember that this was before the introduction of the “E-ticket” headlining ride, and even before the D-ticket. So admission and eight paid attractions. So if you wanted to ride Jungle Cruise again, you'd pay the modern equivalent of $3 for another C-ticket. 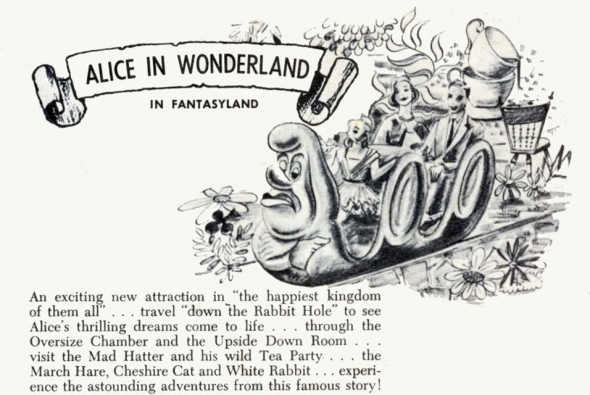 Just three years later, general admission rose for the first time. However, the price of a ticket book (now with 10 tickets instead of 8, and including the new D-tickets) rose as well, and in today’s terms, it cost $38.00 to get into Disneyland for one day to ride 10 attractions. Remember, too, that those attractions were limited by ticket type (only one or two D-tickets in each booklet) and that additional tickets could cost $3.50 per ride.

By the way, attractions added just in 1958 included Alice in Wonderland, the Grand Canyon Diorama on the Disneyland Railroad, Midget Autopia, and the Sailing Ship Columbia. The previous year had seen the Frontierland Shooting Gallery, House of the Future, Motor Boat Cruise, and Sleeping Beauty Castle Walkthrough. So the price rose, but probably deservedly so. 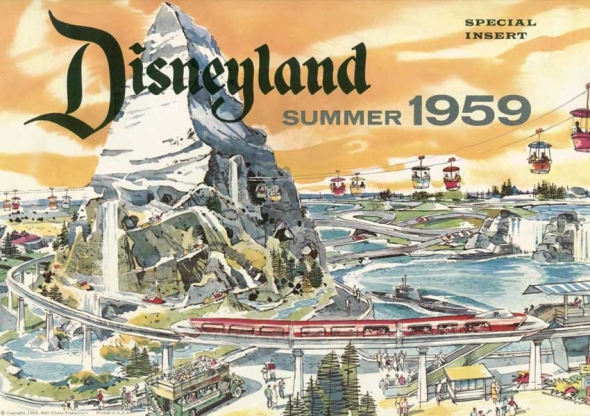 1959 saw the introduction of the “E-ticket” with the opening of Submarine Voyage, Matterhorn Bobsleds, and the Monorail. The new E-ticket designation signified a headlining attraction. The term is still used today to advertise a ride that's the best of the best.

The price to spend a day at Disneyland in today’s terms was up one dollar to $39.00, but recall that the ticket book contained 10 tickets, with only one or two E-tickets. As in the past, an extra ticket would cost more money. If you wanted to experience the three new E-ticket attractions, you'd pay more than advertised.

In 1982 - 23 years later - Disney dropped the ticket book system and replaced it with a pay-one-price admission that included almost all attractions. The cost was $15.00 at the time - $37.00 in today’s money.

If it appears that the price of admission didn’t jump much in 20 years, you’d be right! A day at a Disney Park in 1982 cost about the same as a day in 1959 when inflation is considered. So while the people of 1982 would no doubt balk at $5 admission from 20 years earlier compared to their $15, they really weren't paying any more in terms of spending power thanks to inflation.

Now we’re getting somewhere. In 1989, Disneyland opened Splash Mountain, and a day at the park would cost $45.00 in terms of today’s buying power. Here, ticket price rose pretty directly with inflation. $8 more in terms of the 1980s value and their 2015 equivalents. 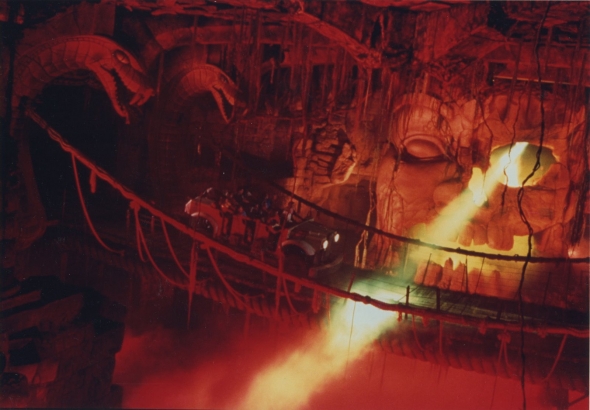 Disneyland opened the Indiana Jones Adventure: Temple of the Forbidden Eye in 1995. The wild attraction is appropriately billed as the biggest, loudest, most intense E-ticket Disneyland has ever built. To experience it, a day at the park would cost the equivalent of $52.00 today. 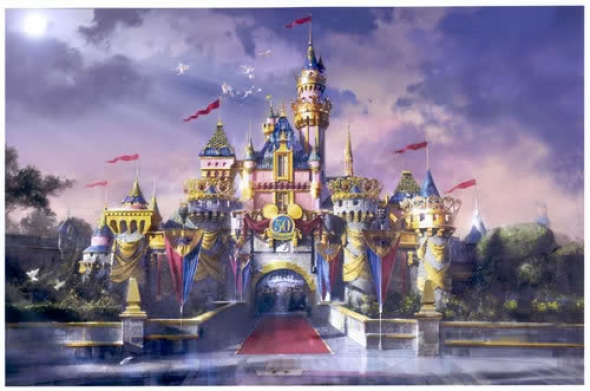 Just in time for the park's 50th anniversary and the international celebration it ignited, the price of a single day at Disneyland or Disney's California Adventure cost $53, or $64 in today's money. Here's another important place where inflation matters... Comparing 2005 to 1995, the admission price seems to have jumped $20. But in terms of today's money and spending power, it really only cost about $10 more to get into either park for a single day.

And for what it's worth, this (relatively) low price might've gotten you into Disney's California Adventure, but this was the version of the park that did not yet have Buena Vista Street, Cars Land, The Little Mermaid: Ariel's Undersea Adventure, World of Color, Toy Story Midway Mania, or even Monsters Inc. Mike and Sully to the Rescue. Certainly not the park we know today, which is probably worth a higher admission price...

Just one year later, the price jumped significantly. The $10 jump in price brought a day at Disneyland to $73 in today's money. $10 more for a single day is probably the largest jump at one time that we've seen, and neither park introduced a new attraction. It's not even as though they were recouping from a significant prior expense - the most recent notable addition was 2004's Twilight Zone Tower of Terror at Disney's California Adventure. Still, the price jump signaled the start of a rapid incline. The price for a day at Disneyland stayed mostly level through the 1980s, boosted a bit in the 90s, and now would climb steeply through the present.

Speaking of which, let's talk about today: 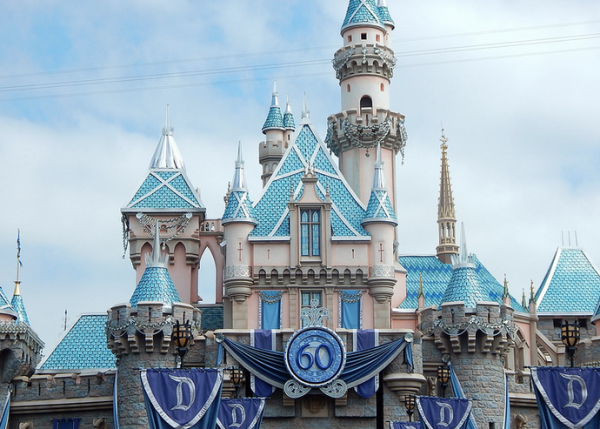 A single day at Disneyland Park today will cost you $99.00. Now hold on tight, because this is where we crunch the numbers.

During Disneyland's first 40 years - from 1955 to 1995 - the price, in terms of today's spending power, almost doubled. From $29 (1955) to $52 (1995). While that jump is significant, those first 40 years also saw the introduction of... well... every single Disneyland attraction save for the few rare opening day originals, like Jungle Cruise and the Fantasyland dark rides.

During the next 20 years - from 1995 to 2015 - the price almost doubled again. From $52 (1995) to almost $100 (2015). And in those 20 years, you can't count on one hand the number of E-tickets added to Disneyland Park... because zero were added. The last E-ticket constructed at Disneyland was 1995's Indiana Jones Adventure. Fans are quick to point out that Disneyland has remained untouched as its admission price has literally doubled with inflation.

Why? How has this happened? How did ticket prices get so out of hand? Keep reading…

While I understand inflation and that Disneyland was never for the poor - I used to use babysitting money to buy an annual pass and that was in the 70's - it was a Magic Kingdom pass back then (but if a high school person could afford it, and it was where fun dates were - then I don't agree with the idea that it was only a place for those that did not have problems with their bills).

First of all disneys vision was for all to enjoy. People got deessed up for everything back then. In addition they can limit the amount of guests without raising prices. You clearly are an apologist for disney who rakes in billions. Garbage. Sorry so many people are buying into your flawed logic.

Walt Disney is long since deceased. Things evolve. Its a private corporation now whose #1 concern is profits. Thats capitalism baby. Dont like it, dont go. Talk about your "first world problems". Anyone who complains about it comes across as a spoiled brat.

Disney should go back to ride tickets.Not like the physical ones,used in the past.They could just give you some kind of wrist band that would be scanned for each ride.This would cause people to not do the same ride several times,which would reduce lines.Would also cause customers to try different rides,so they wouldn't get burned out on any given ride.Would allow Disney to lower the price for patrons having a fixed number of rides and could price for those not using rides at all.Also,would make people appreciate each ride,more than they do now,when there is no cost for a ride.

my family has been going to disney for 29 years and i know it is expensive but if you stay at a disney resort (and there are reasonable priced ones) you get free transportation to and from the airport plus they even pick up your luggage. or you could go to a broadway show and spend 150 to 200 dollars each for tickets or go to a sport game and spend 100 to 200 dollars including food so it boils down to do you want a 8 to 10 hour day of enjoyment or about 2 hours sitting in one place. disney is a company that has to make money to fund all these new projects that's my opinion