The Perfect 21st Century Attraction is Here...and it Wasn't Built by Disney or Universal 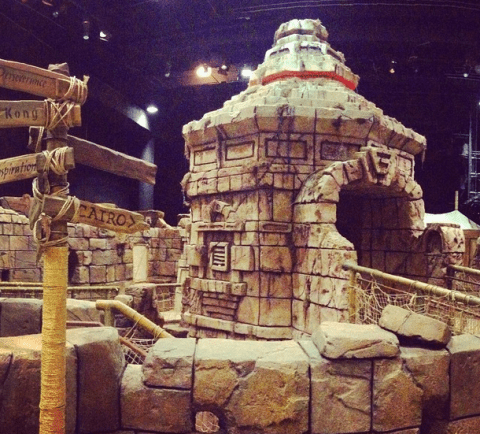 Can you unlock the secrets of the Valley of the Unknown? Descend into a living adventure video game and uncover the island's history... if you can.

Welcome to the Valley of the Unknown. Here, time and the elements have buried what must have taken centuries to construct. The forgotten and mysterious tropical island – under perpetual starry skies – hides innumerable secrets: stone spirits, locked temples, buried ancients, and indecipherable languages. Adventure in the Valley of the Unknown may be the only attraction of its kind in the world: a fully immersive living puzzle that takes weeks or months of effort to fully solve.

Located at COSI – a revolutionary science center in Columbus, Ohio that we discussed in detail here – Adventure is presented as one of seven “learning worlds.” COSI is comprised of seven fully immersive themed environments, each representing a single piece of the larger concept of science. It’s innovative enough to consider “Adventure” as one inalienable element of scientific study (though it doubtlessly is: facing the unknown, taking chances, setting out to find knowledge…). It’s even more impressive that the Adventure exhibit takes such revolutionary form.

So what’s hidden under the dark, torch-lit skies of the Valley of the Unknown, and what makes this permanent exhibition at an Ohio science center rival even Disney’s best?

1. The Story of The Explorers Society

The stark white hallways of COSI suddenly give way to a massive rock outcropping in the wall. This cavern mouth leads into a dark tunnel, lit by wavering electric lamps. En route to a canvas and bamboo tent, visitors pass by a bronze plaque that labels the structure Outpost #41 – the newest headquarters of the international Explorers Society. This legendary group of adventurers (on par with Disney’s S.E.A. and the multiple attractions it ties into one intercontinental storyline) has established Outpost #41 to explore the long lost Valley of the Unknown.

Greeted by a member of the Explorers Society (always with a charming accent and life story), the scene is set: it’s 1939 – two years after the Explorers Society first set foot on the island. A black and white film reel informs the new recruits that in the last two years, the Explorers Society – led by the fearless and dearly departed Eva Snodgras (may she rest in pieces) – discovered the crumbling stone Maze of Reason, the lush Temple of Inspiration, and the Cavern of Perseverance filled with catacombs. As well, each of those three areas of the island contained a large stone statue built to embody the qualities of a good explorer: the Spirits of Reason, Inspiration and Perseverance. 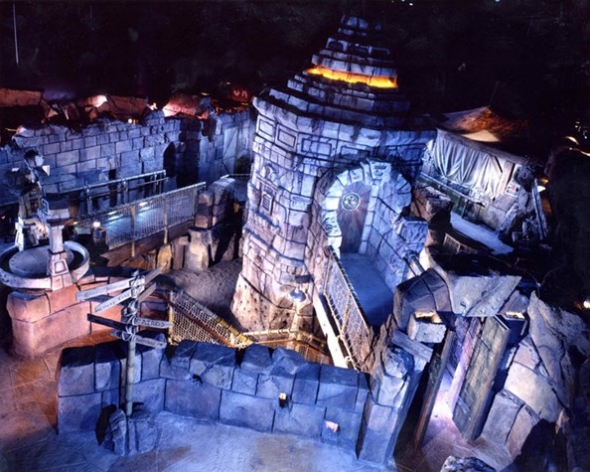 Still, the most amazing discovery has to be the towering Observatory. Indeed, the massive two-story Observatory at the dead center of the island is said to contain the Treasure of Knowledge. The problem? It’s locked, and no one can find a way inside. 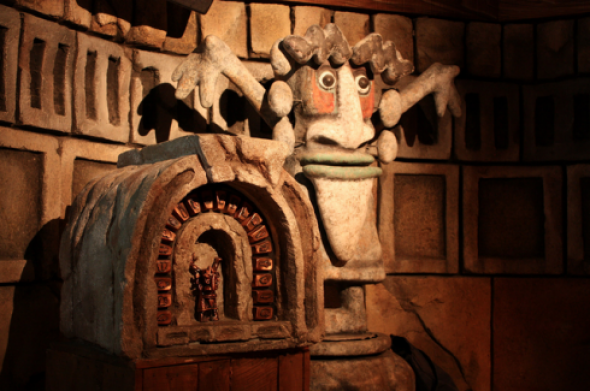 But as new recruits, you have arrived just in time.

Recently, Eva and her crew began to dig into the volcanic sands around the Observatory and found something unusual: a fourth region of the island (The Well of Questions) and an accompanying fourth stone statue. Her crew has worked tirelessly to relocate P’lunk, the Spirit of Questions, from the well to the Outpost, where Eva’s last diary entry before her disappearance claims to have found a way to “wake up” P’lunk using three animal symbols she found carved into the stone walls of the Well, seemingly having appeared from no where as she paced and murmured to herself.

It would, of course, be preposterous to touch those three animals on the stone-and-brass keypad accompanying P’lunk, right?

“Who dares awaken me? Who disturbs the tranquility of the mighty P’lunk, Spirit of Questions?! ...Oh, it’s you! And you want me to help you in your quest for knowledge?”

“The Observatory gates will open wide if you know the code for getting inside!
It’s made up of pieces: a total of four. Look here at the first, now find three more.
If you wonder where to find the others, just look for my Spirit sister and brothers.
They are somewhere waiting for you in the Maze, the Temple, and the Cavern, too.
When you add their pieces to the one I’ve revealed, the Observatory will be unsealed!
You will enter through its doors, and the Treasure of Knowledge will, at last, be yours!” 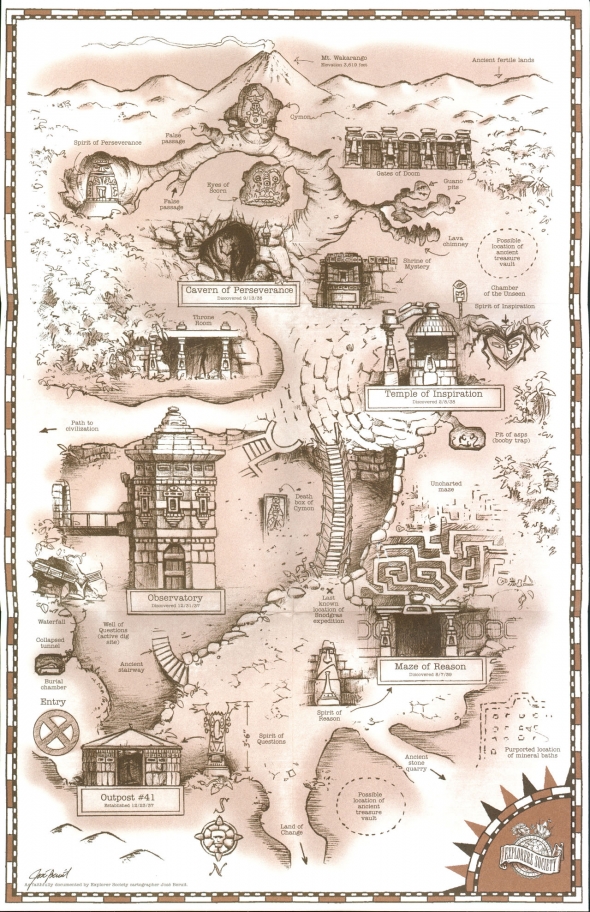 Armed with the footage from the Dateline newsreel, a map of the Valley, and P’lunk’s riddle and symbol, the Explorers Society member swings wide the door of the Outpost and sends you out onto the Island to find your way home. “Should you become hopelessly lost,” they often offer, “send up a flare and we’ll have someone find you in two to three weeks.” The adventure begins…

3. The Maze of Reason 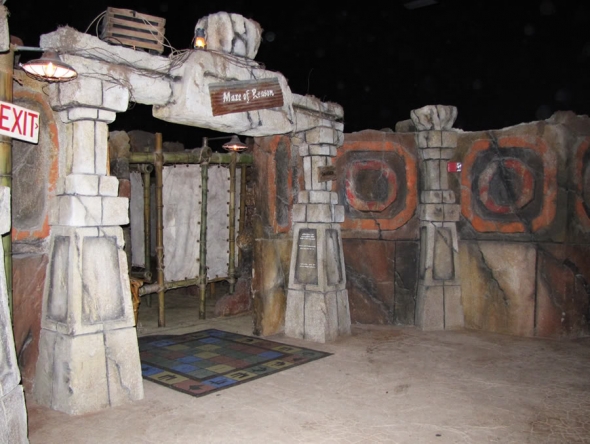 The ancient Maze of Reason just outside of the Outpost seems a reasonable enough place to start. Using miles markers and ancient arches inscribed with code, visitors are tasked to use reason to navigate the maze and find the three animal symbols that will awaken B’ra-Zoa, Spirit of Reason. The maze is dark, with the flickering incandescent bulbs of overhead excavation lamps constantly dimming as the generator attempts to keep up. 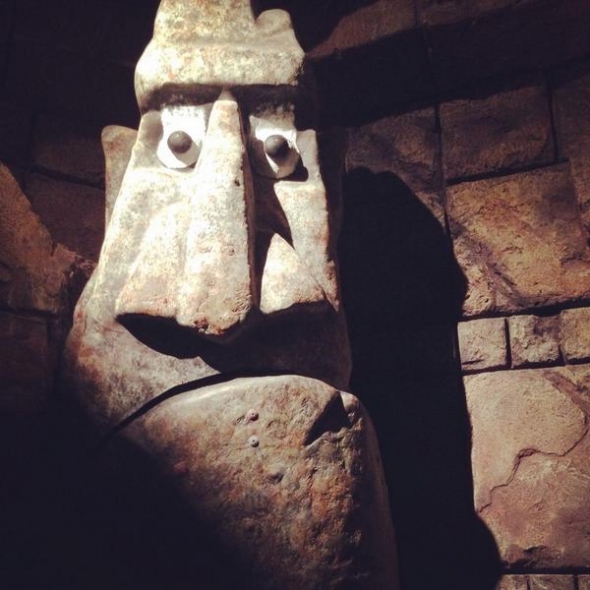 Even once you find his animal symbols, B’ra-Zoa is hidden somewhere in the heart of the maze, standing silently after many centuries and awaiting those who can awaken him. When awakened, B’ra-Zoa reminds you to use your head; don’t be fooled by your heart. For proving your mastery of reason, another piece of the code to unlock the Observatory is yours.

4. The Temple of Inspiration 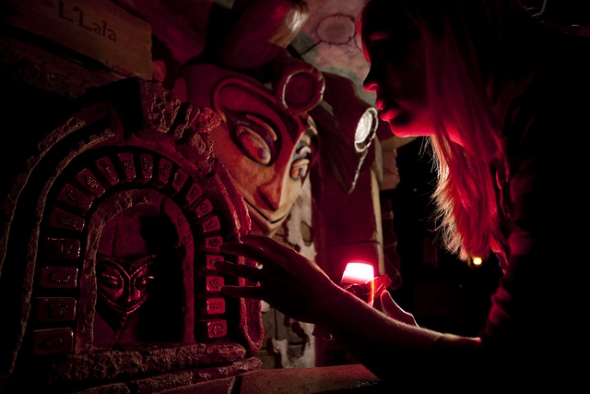 The ancient temple of Inspiration is built to honor L’lala, the Spirit of Inspiration. Her three trials are tough, and will challenge all but the youngest explorers. That’s because L’lala’s job is to ensure that only those who can think outside the box can enter the Observatory.

“Think like a child,” Explorers Society members will often offer when visitors are stumped on how to find L’lala’s three animal symbols. Still, once she’s awake, L’lala reminds you to use your imagination, because inspiration is everywhere. You'll need to be inspired if you'll awaken the fourth Great Spirit, hidden deep within the island's torch-lit caverns...

Just read about this today. Sad to discover that Adventure closed at COSI already. It's now another Natural History exhibit.

As someone who has gone through and solved the whole mystery I can say this is one of my favorite things I've ever done. If anyone is concerned about it being too easy or too childish- I assure you it's not. It's a lot of hard work and deep thinking but it's so fun. I worked with four other people to solve the second level as fast as we could (because we only had one day to really work on it) and we did finish it, in about nine hours. But you can take as long as you want or need to finish it. Does anyone know of any attractions like this one? I enjoyed it so much and I wish I could go through it again.

Doesn't this design sound a lot like the Unicorn Maze that was supposed to be part of Beastly Kingdom? Adventure opened in 1999. Could it have taken some of its ideas from leaked info about Beastly Kingdom?