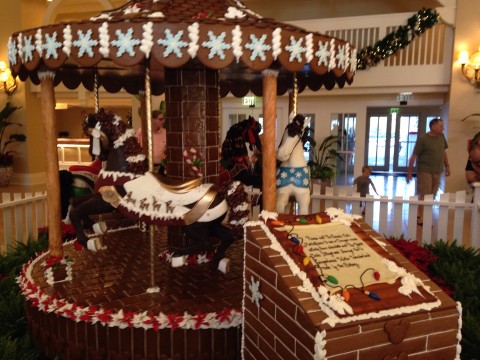 Walt Disney World takes on a festive new face around the holidays. While the separately ticketed Mickey’s Very Merry Christmas Party is overflowing with holiday photo opportunities, you don’t have to pay for separate admission to get some great Christmas card pics. In fact, some of the most stunning displays on property are available outside the parks at locations like Downtown Disney and the bigger resorts. Check out these prime locations that are available all through the holiday season for unforgettable holiday pictures.

Cinderella Castle is at its most stunning during the holidays. Any day that there isn’t a Christmas party, you’ll be able to enjoy the iced castle with your regular Magic Kingdom admission. There’s even a special Frozen themed stage show each evening when the castle is lit. Whether you catch the show or not, the iced castle is the perfect backdrop for a holiday photo. Getting the lighting right can be tricky, so you may want to get a few pictures from the PhotoPass Photographers. You’ll find several located up and down Main Street.

The Osborne Family Spectacle of Dancing Lights is one of the best-known holiday events at Walt Disney World. Located at Disney’s Hollywood Studios, this event takes over the Streets of America. You’ll find Santa Goofy at one end for a great Christmas character photo. There are also several other great spots for pictures throughout the Streets of America. Again, the PhotoPass Photographers often have the best locations and equipment to help you get good pictures, so take some of your own, but pose for a few of these, too. You’re under no obligation to buy them but it’s fun to see how they turn out.