The 3 BIG Updates from Disneyland This Month (November 2014) 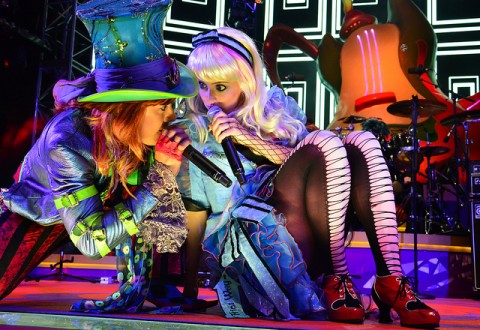 1. Is Luigi’s Flying Tires spinning into the Festival of the Dance? 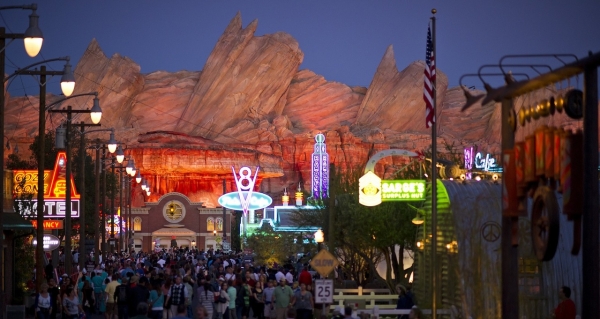 When Cars Land, the first expansion in California Adventure’s 13-year lifespan, debuted in June 2012, it won many plaudits from both the specialty press and themed enthusiasts for its highly immersive nature and its $200 million flagship attraction, Radiator Springs Racers.

What failed to impress, however, were the land’s two supporting rides, Mater’s Junkyard Jamboree and Luigi’s Flying Tires, mostly due to their being reskinned clones of two of Disneyland’s oldest – and, therefore, more simplistic – attractions, Mad Tea Party (which has since gone on to exist in every single Magic Kingdom-type park across the globe) and Flying Saucers (which closed after a meager five-year run in 1966), respectively.

(Yes, okay – to be completely fair, Radiator Springs Racers is also a variation on a well-established theme [in this case, Epcot’s extremely popular Test Track], but it seems to have passed muster thanks, perhaps, to its progenitor’s relatively recent introduction [in 1999] and its thrill-ride bent, which is a comparative rarity in Disney’s rank and file.  And the fact that RSR is actually an engaging, fun experience probably doesn’t hurt, either.)

Luigi’s in particular has been the target of continual guest criticism, given its hard-to-implement controls and cumbersome-to-board ride vehicles.  (Why would Disney ever greenlight something this anti-user-friendly?  Because John Lasseter, the chief creative advisor to Walt Disney Imagineering and, of course, the director and co-writer of Cars, wanted to recreate the beloved Flying Saucers of his youth.)

As such, it’s not surprising that rumors have incessantly swirled over the past two years that Disney would be taking this attraction out to pasture, but that has always seemed to be more wishful thinking on fans’ part than actual behind-the-scenes ruminations – until now, that is.

After quietly building steam starting in the late summer, word finally reached a crescendo at the end of last month that Flying Tires would, indeed, be at least temporarily shuttered, thanks to leaked memos from cast members that show a refurbishment is scheduled to start on January 12, 2015.

There are two elements to this scenario that set off red flags:  (a) the length of the closure (an unusually long 11 months) and (b) the fact that the attraction has been operating without excessive interruption or technical difficulty for the past two years, something which would seem to negate the necessity of a refurbishment in the first place.

As our friend Robert Niles over at Theme Park Insider points out, there are a small number of possibilities that Team Disney Anaheim can choose from should the ride, indeed, be meant for the scrap pile in the sky, ranging from leaving the space indefinitely closed to trying to improve the current experience (such as making the ride vehicles easier to navigate) to tearing out the ride system altogether and replacing it with a brand-new Luigi-themed attraction (it’s hard seeing Disney ix-nay the Casa Della Tires landmark or not utilizing the real-estate for anything other than a ride). 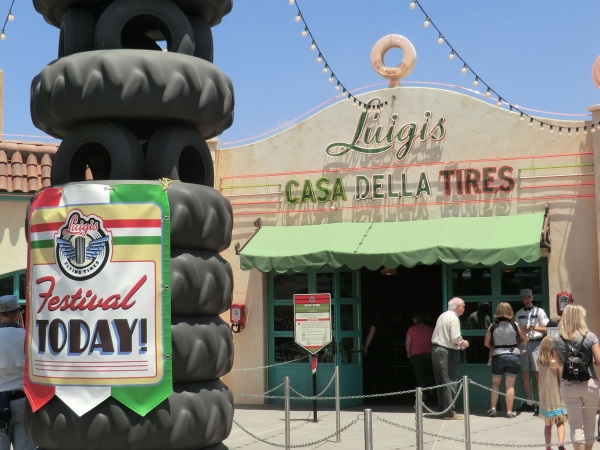 MiceChat has a rather interesting account of what, exactly, is going on with the space.  Imagineering is reportedly looking to keep the façade and queue of the attraction but entirely remove the flying tires themselves; instead, the wifi-controlled ride vehicles seen in Walt Disney Studios’s Ratatouille and Hong Kong Disneyland’s Mystic Manor will be installed, removing control from users and allow them to instead sit back and enjoy the show, as in most other Disney attractions.

The theming is said to exchange the current version’s “Festival of the Flying Tires” backstory for a new “Festival of the Dance” premise.  The new ride vehicles would be a fleet of 1950s Fiat cars (presumably Luigi’s family visiting from Europe) that will – you guessed it – spin and dance their way through a “choreographed musical production number.”

MiceChat fully expects the new iteration of Luigi’s to be up and running by as early as next Christmas – Team Disney Anaheim, apparently, is in an uncharacteristically aggressive mood.