Character Meals at Walt Disney World are the gold standard in table service dining experiences. These are the rare vacation memories that can literally last a lifetime. I am not exaggerating when I say that my family has an entire wall filled with framed Disney pictures, many of which were taken by professional Disney photographers during Character Meals.

There is pure joy embodied in all of these meals, even for those of us who do not have children. Simply hearing the laughter of kids is an uplifting sensation that elevates the food as well as the ambience. No Character Meal at Disney is ever bad – although the food can be. Still, ranking the dozen current options means that six of one group must be ruled lacking in order to better appreciate the half dozen of the other. As always, author bias is a huge factor. Many people love the character meal that I have ranked one of the worst two. Let’s agree to consider one another crazy if you violently disagree on any of these. 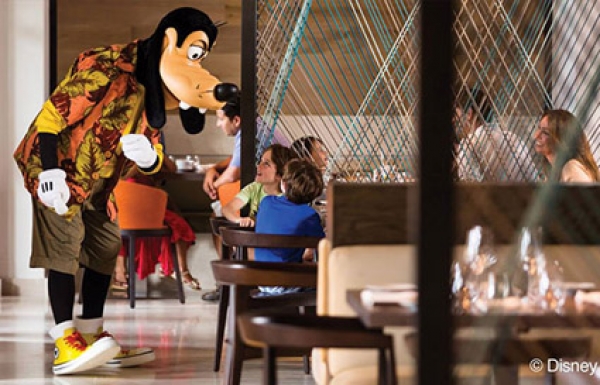 This character meal was introduced in August of 2014. This breakfast-only meal is served at Ravello’s restaurant. If you are a longtime Disney park visitor and the name doesn’t seem familiar, there is a logical explanation. It is hosted at the recently opened Four Seasons Resort Orlando, one of the centerpieces of the new Golden Oaks luxury home community across the bay from Magic Kingdom. Therein lies the problem.

The beauty of most character meals is that they are centrally located near the four Disney parks in Orlando and their nearby Disney resorts. The premiere locality allows travelers to ride a bus or monorail to their meal. Goofy and Pals Breakfast lacks this convenience. It is the only legitimately off-site character meal, although another one listed below technically qualifies for reasons I will explain in a moment.

Once you get past the transportation issues, however, Goofy and Pals has a lot of positives. In fact, there were so many that it narrowly missed being on the Best Character Meals list. By all accounts, Goofy and Pals is a well-kept secret thus far. Disney fans willing to make the journey across the bay will discover a regularly empty breakfast, especially if the visit occurs closer to brunch hours. That means that you will have plenty of personal time with Goofy, Minnie and Mickey. Plus, the quality of food served at Ravello’s is tremendous.

Perhaps the explanation for its lack of popularity is that Goofy and Pals only occurs on Thursdays and Saturdays. Note that an occasional third day is added during high-traffic points on the Disney calendar. Clever Disney trip managers who are not afraid of taking a taxi/Uber off-site will probably rank Goofy and Pals much higher. The mascot costumes are especially adorable. 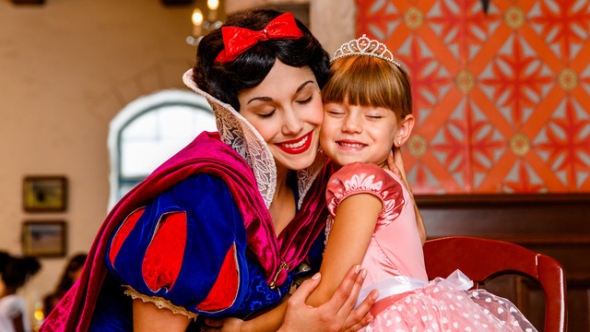 Before you start screaming “PRINCESS HATER” with murder in your eyes, let me explain. Akershus, to its credit, provides some of the most original food of any character meal. I actually love the food options at this EPCOT World Pavilion restaurant a great deal. If you have never had Kjøttkake, well, you probably aren’t European.

The reason why it makes the Worst List is something beyond its control. Akershus is the back-up princess meal option for people who cannot get reservations to Cinderella’s Royal Table. Many of the characters are identical at the two meals. The problem is that Akershus lacks the ambience of eating at the centerpiece of Magic Kingdom. Instead, it is tucked in the back of EPCOT. Akershus is actually a great option for people who want the princess meal experience without all of the hassle of the Magic Kingdom. It is by design and execution the inferior clone meal to Cinderella’s Royal Table, though.

4) Winnie the Pooh and Friends at Crystal Palace 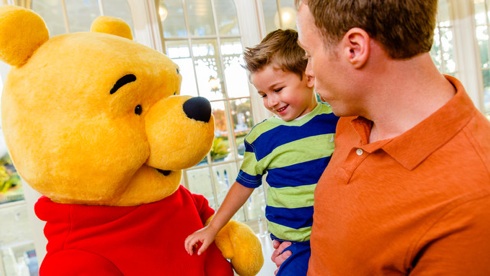 The only character meal at Magic Kingdom that does not require massive planning for Advance Dinner Reservations, Crystal Palace offers a lot of convenience. After all, Magic Kingdom is the most popular theme park in the world. This restaurant is only a couple of blocks away from the front entrance, which means that it is the easiest character meal to plan at Walt Disney World. Reservations are rarely a problem, and it is never more than a mile away for someone at the park.

Why is it not ranked higher? At the risk of alienating Winnie the Pooh fans (count my wife as a member of your group), it is just not an exciting meal experience. The primary mascots are Winnie the Pooh, Tigger, Eeyore and Piglet, which means that there are several picture-taking opportunities available. If you consider Winnie the Pooh and his gang to be timeless characters, this character meal is not to be missed. If you are like me and outgrew them, all you are left with is the food. And Crystal Palace is an extremely dull buffet whose only saving grace is a strong dessert menu.  I view the restaurant as a fallback option if the better character meals are already booked.

Are you rating Tusker House solely on breakfast? Or in totality? If the former, I think you should give Tusker House a try during lunch or dinner time and see if you like it more since the food will be way different than breakfast.

I'm actually going to agree with Dave on most of this list. While these are the lessor choices, they are still pretty darn good. I had Akershus as my Princess backup and I've got to say one of my most memorable experiences was there. First of all - it was the ONLY place where Ariel had legs. She would come and meet you as a Princess. That MADE my daughters trip. Secondly, there was a table next to us and their young daughter sleep thru the entire meal and visits from the Princesses. When she woke up, almost closing time EACH and EVERY Princess came out of the back just to greet her. Not because they complained (they did not) but the staff did not want her to leave without meeting all of them. I know it was her magical experience but I was every bit as impressed as she was.

Now, putting Akershus on the list was just a bit too far. The advantage of the Princess Storybook Breakfast, is exactly what you listed as a negative. The same princesses as the CRT but only one table service credit. It's excellent food, and great princess interaction. In addition, beautiful decor. This is always one of our must do.

I beg to DIFFER!!! We just took our grandchildren to Walt Disney World and our Tusker House breakfast was delicious! The kids, ages 3, another 3 and 6 had a fabulous time and we all enjoyed our meal, which was a much better value than the Epcot Princess lunch we had last year that gave my husband food poisoning!!!

As far as YOUR number one pick... IF you don't know who Doc McStuffin or JAKE is then where are you hiding??? They have their own attractions at the park!

I WAS giving your blog some credence but now I guess I will have to take it with a grain of salt. PLEASE don't judge some attractions by your lack of knowledge... this was a VERY disappointing post.

As was clearly stated in the article, these are David's personal opinions and are not shared by all of us here at Theme Park Tourist.

That said, I don't see any harm in publishing posts that stir up opinions.