Imagineering Update: The 3 Biggest Changes to Tokyo Disney Resort Yet

“Tokyo Disney Resort is at full capacity, and if it doesn’t expand, it won’t be able to attract more users,” Shun Tanaka, an analyst with SMBC Friend Research Center, recently told Bloomberg.  “Customer satisfaction is starting to drop, and it needs to expand to alleviate that.”

And expanding it is.  A few short weeks ago, the Oriental Land Company – which owns and maintains Tokyo Disney – made the move official, detailing the ten-year, $4.5 billion project with much fanfare.  It’s easily the biggest development at the Japanese properties since the single-park Tokyo Disneyland was transformed into the full-fledged Tokyo Disney Resort 13 years ago, and it may be enough to overshadow competitor Universal Studios Japan’s new Wizarding World of Harry Potter (which may be part of the reason behind the suddenly-shrinking consumer satisfaction scores).

(All of this long-term expansion talk is, of course, after the resort’s previous announcement of short-term parade/live entertainment additions.  Obviously, Oriental Land is hopeful that the two will work together to create a one-two punch that’ll be hard for Universal – or anyone else in Asia, for that matter – to beat.)

Just what will all this new construction net one of the world’s busiest theme park destinations?  Quite a bit, it turns out – and that’s not even getting into the change in Oriental Land’s underlying mentality that the move may very well signal. 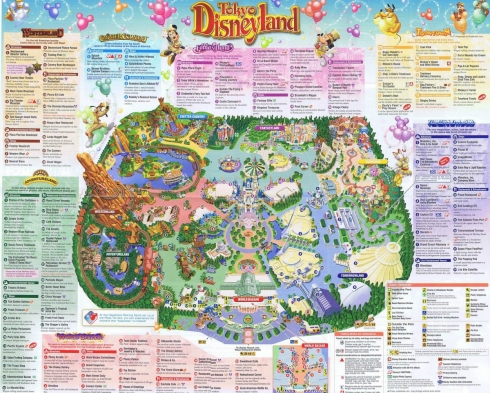 It seems that Disneyland will be receiving a significant portion of the new construction frenzy, and it’ll center on Fantasyland, which will be nearly doubled in size once everything is said and done.  The Oriental Land Company has announced that all existing attractions in the land will be receiving a renovation, while several “major” new rides, stores, and restaurants are on the drawing board for inclusion in the newly developed areas.

Just where will all this new land come from?  Screamscape has laid out the apparent plan that Oriental Land is mulling over:  a large section of Tomorrowland will be repurposed for the new Fantasyland, including where Star Jets, Grand Circuit Raceway, and part of the Tomorrowland Terrace counter-service restaurant (luckily, it’s the park’s biggest eatery, with seating for roughly 1,500 – a fact which no doubt played a role in the company’s decision) currently reside.

Additionally, it seems as if It’s a Small World will be moved from its present location to a brand-new spot, perhaps in the soon-to-be-former Tomorrowland territory.

The biggest question in all this, of course, is:  will Tokyo Disneyland’s new Fantasyland be the New Fantasyland that Magic Kingdom just finished rolling out this year?  The concept art that accompanied the announcement would seem to suggest a tentative yes.

Tucked off in the distance is a series of cottages that look suspiciously similar to Orlando’s much-ballyhooed Seven Dwarfs Mine Train, while another building just may be the next-generation Be Our Guest table-service restaurant.

Then again, as with Universal Studios Beijing’s recent concept art, this may also be a case of the theme park operators issuing artwork that is intentionally vague, using pre-existent attractions from other locations to be evocative rather than illustrative.