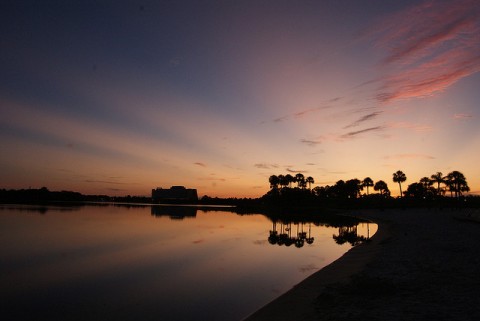 Part of what makes Walt Disney Imagineering so good at what they do is that they never quite throw away a truly great idea. Sure, maybe the first attempt to execute that idea wasn't perfect, but if an idea is legitimately great, it will be given every chance to succeed. To prove this, you needn't look any further than the lakes of Walt Disney World.

You see, in the early days of the Walt Disney World Resort, Bay Lake and the Seven Seas Lagoon were considered a central draw of the Vacation Kingdom. They were home to dozens of attractions – everything ranging from watercraft, to floating parades, to places to swim, and so on, and sought to offer a relaxing alternative to the resort's sole theme park: the Magic Kingdom.

Over time, as Disney opened new parks and offered even more alternative entertainment, some of those activities began to fall out of favor for one reason or another. Many of these attractions are still operational, such as the Electrical Water Pageant and the various watercraft, but others have long since been abandoned or discontinued.

But, as Disney is wont to do, even those discontinued attractions were used to inspire something even newer and more exciting. Let's take a look at three of those abandoned attractions – two of which have become rather infamous on the internet, while the other exists mostly in rumor and hearsay.

Disney's River Country opened in 1976 – roughly five years after the launch of the Walt Disney World Resort. It was a proto-water park designed to look like an old fashioned swimming hole, complete with rope swings, water slides, and a lazy river. The main pool area featured a sand bottom, and its water came from nearby Bay Lake, giving it even more of a natural feel.

In 1980, a young boy perished after contracting a rare but deadly amoeba, allegedly caught at River Country. Those sorts of amoebas have been known to breed in freshwater lakes when temperatures are hot, and so the boy's death, while tragic, was not so unusual as to warrant the immediate closure of the park – thus, it continued to operate for another 21 years.

In 1989, Disney opened Typhoon Lagoon and, six years later, upped its water park count to three with Blizzard Beach – each of those parks offering even bigger and better attractions than those offered at River Country.

The park remained open until 2001, when economic conditions in the wake of the September 11 attacks led Walt Disney World to cut back on some of its offerings. It is, of course, at this point that the story gets a bit odd.

River Country, which operated solely during the warmer months due to its reliance on lake water, was one of Disney's first major cut backs in the recession, although according to the Orlando Sentinel from the time, they were not entirely certain that it would be closed permanently. As of April 2002, Disney remained in a holding pattern, saying that River Country would reopen if there were enough guest demand. Of course, there wasn't, which is why it simply remained closed for nearly two decades before the remains were demolished to make way for more hotels.

But while Disney moved on from its original themed water park, they still remained committed to the concept, perfecting it and creating two of the best water parks in the country in Typhoon Lagoon and Blizzard Beach.

You can find out everything there is to know about River Country by reading this recent feature.

Walt Disney originally wanted to use live animals for the Jungle Cruise out in Disneyland. This proved to be rather impractical, but Walt's interest in bringing exotic animals to guests helped spawn a unique attraction at early Walt Disney World – Discovery Island on Bay Lake.

While it opened as Treasure Island, Discovery Island was a place where visitors to the resort could meet and interact with all kinds of zoological life, including endangered and rare birds, lemurs, and tortoises. Its message of conservation, and the science and education performed within, eventually earned it official accreditation from the American Zoo and Aquarium Association.

Guests arrived via boat from the Contemporary or Polynesian Resorts and could spend the day either exploring the wildlife exhibits, or investigating the various props and sets placed around the island by the Imagineers, included the famous shipwreck of the Hispanola.

But, like River Country, once Discovery Island was closed down, Imagineers weren't quite sure what to do with it next. Most high-minded plans, which included everything from a Myst-themed overhaul to one based on the ABC television show Lost, fell through. Instead, Discovery Island has mostly been left to nature, and the results are eerie.

Like River Country, it's become a popular spot for urban explorers – only this one is a bit tougher to get to as it requires a swim. It's usually just easier to go to visit its spiritual successor: Animal Kingdom.