The 3 BIG Updates from Disneyland This Month (October 2014) 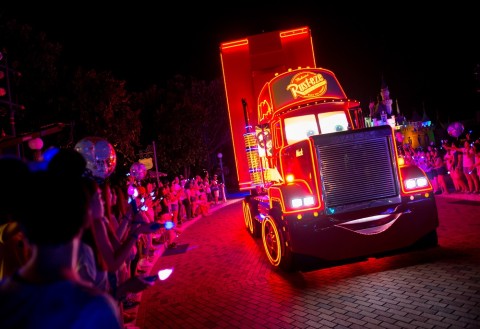 MiceChat has a rather interesting report out this week detailing Team Disney Anaheim’s current plans for instituting a Frozen overlay of California Adventure.

That the company is thinking of aping Walt Disney World Resort’s ad-hoc event approach – wherein it quickly sets up a seasonal experience consisting mainly of exclusive shows, parades, and culinary offerings – is not at all surprising; what is is the timeline Disneyland’s brass is reportedly mulling over. 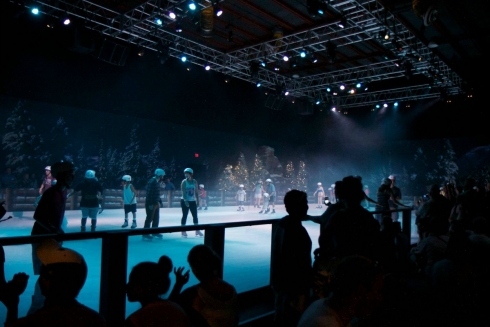 What, exactly, would Disneyland Resort’s version of a Frozen Holiday entail?  According to the site, several temporary attractions are scheduled to be set up all throughout the park’s Hollywood Land – and they should sound suspiciously similar to those familiar with Hollywood Studios’s Frozen Summer Fun event from earlier this year:  a sing-along show will take over Muppet*Vision 3D’s theater; an indoor playground/ice-skating area will occupy Stage 17; and character meet-‘n-greets, along with related activities, will be staged at the Animation building.

(All of which, of course, is not to mention the obligatory round of exclusive food and merchandise that will also be found throughout California Adventure).

Instead of having its Frozen experience debut in the customary timeframe of November, as is happening on the East Coast, TDA is reportedly contemplating a significantly later start date – Saturday, December 20, to be exact, which is the last weekend before Christmas.

Although surprising upon first blush, there is certainly reason behind the madness – two reasons, as a matter of fact, and both revolve around the resort’s two main demographics.

First and foremost, such a move would ensure that all the guests, both national and international, who descend on the parks for the holiday season have something fresh to experience.  And, even more importantly, such brand-new additions should go a long way to siphoning off crowds from all the other, normally-operating attractions – a desperately-needed development, given just how jam-packed Disneyland Park and California Adventure can become at Christmastime.

Secondly, December 20 is the first date that three of Disneyland’s four annual passes – the Deluxe and the two Southern California Passports – begin their blockout dates for the remainder of the year, preventing passholders from descending upon Frozen en masse.  Once the blockout dates lift in the beginning of January (and the horde of holiday visitors depart), the thousands of annual passholders will be able to enjoy the Frozen experiences to their hearts’ content.

Should Frozen continue to be the unparalleled success that it has been thus far, and if Disney – on both sides of the country – continues to implement these tie-ins in the same way, it’ll be most interesting to see how the Disney faithful continue to react, in regards to both the nature of these experiences and how they’re deployed to the various strata of guests.

It wouldn’t be surprising to see Disneyland take the lead in responding to – and reshaping the scope of its events because of – fan feedback.

(For even more Frozen news, be sure to check out our update on Disneyland’s meet-‘n-greet wait-time experimentations.)

Haven’t heard of Hong Kong Disneyland’s “Paint the Night” parade yet?  Don’t worry – odds are you will, a lot, in the coming months.

Having debuted just this month, “Paint the Night” is a first for Disney Parks and Resorts:  it’s an all-LED parade that took two years to design and which features seven original floats – themed to Monsters, Inc., Toy Story, Cars, Tinker Bell, The Little Mermaid, Belle Candlelight, and the Mickey and Friends Finale – that contain some 740,000 individual lights.  Even the various accompanying characters and cast members (all 80 of them) are decked out in the LEDs, lighting up alongside the floats. 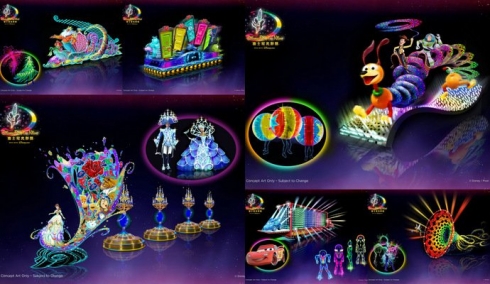 The highlight of the parade, however, is interactivity, the ever-more-popular buzzword of Disney’s various international theme parks.  By purchasing special merchandise (but of course), guests can interact with the proceedings at two specific show-stop moments.

The Mickey Magic Paint Brush can change the color on certain characters’ costumes, while the opposite happens with the Mickey Glow Mitt and Minnie Glow Bow:  as floats pass by, they change these items’ colors, making guests fit in with the show.

Why should Disneyland fans care?  Besides possessing an appreciation for all the latest Disney developments, Team Disney Anaheim has made the rather last-minute decision, according to Screamscape, to duplicate “Paint the Night” and include it as yet another component of the park’s 60th anniversary celebration next year.

While the site can’t discern from its sources whether the parade will keep the same name or go by “Animasement,” it does stand resolutely behind some additional details – namely, that a number of retired floats from Tokyo Disney Resort have been retrofitted with the huge array of LED lights and will help to make California’s version longer than Hong Kong’s.  (Supposedly, the first two repurposed floats are already sitting backstage and are themed to Peter Pan and The Jungle Book.)

There is one subtraction to go with the addition, however:  while the Glow Mitt and Bow will be on sale, allowing guests to be painted along with the night, the special paint brush won’t, as it apparently has had a number of technical glitches over in Asia.  Rather than fight with the technology Stateside, TDA has reportedly opted – wisely – to not open that particular can of worms at all.