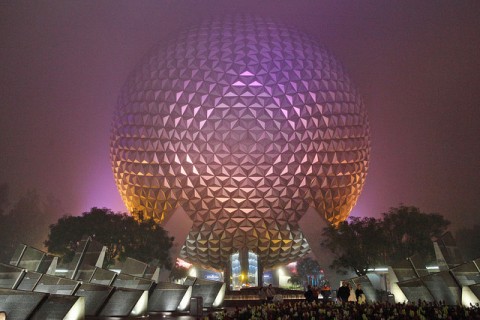 The announcement of the closing of Maelstrom to make way for a Frozen-themed ride in Epcot's Norway pavilion has been met with some controversy. Some are sad to see the charming boat ride removed, while others believe a ride themed to a Disney movie takes away from World Showcase's overall aesthetic. Some are just happy something new is finally coming to Epcot's back half.

Ultimately, though, that debate is focused on a larger question: What exactly is Epcot about?

I've argued before that what separates Epcot from Disney's other parks is that, rather than telling a story, it seeks to argue a thesis. To me, that thesis is this: The better we are able to communicate with one another in the present, the better the world will be in the future. And, if you were to pick one attraction that argues that thesis more effectively than any other, you'd obviously have to go with Spaceship Earth.

So, maybe, if we take a look at the story of Spaceship Earth – where its been, where it is, and where it may be going – we can get some sense of the future of our beloved park. Just as Epcot has changed drastically since its opening in 1982, so too has its signature and iconic attraction.

Here are a few ways Spaceship Earth has transformed over the years: 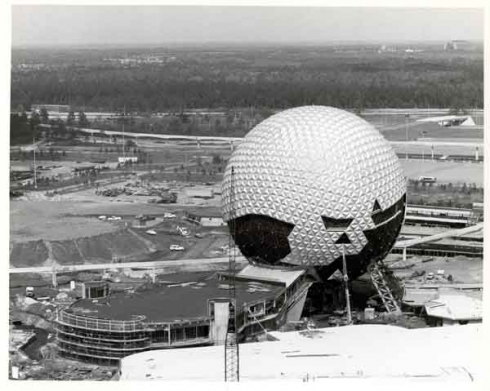 Spaceship Earth would not exist if not for a man named Buckminster Fuller. Fuller was a classically 20th century guy – he was a philosopher, a mathematician, and an architect. He served as the president of Mensa. Not only did Fuller popularize and patent the geodesic dome – a structural concept that ultimately birthed the Epcot icon – but he also helped coin the term “Spaceship Earth.” To Fuller, our Earth is much like a spaceship in that it has limited resources, and that we, as people, must work together to act as its crew and safely command it through the harsh environment of space.

Fuller, like Walt Disney himself, wanted to change the world and make it a better place, so it's fitting that his work would wind up influencing the centerpiece attraction of Epcot.

When it first debuted in 1982, Spaceship Earth was a bit different. Featuring narration by actor Lawrence Dobkin, Spaceship Earth opened with its original story written in collaboration with science-fiction master Ray Bradbury. Bradbury's script was highly literary, using imagery and complex diction to accompany the set pieces in place. For example, his depiction of the fall of Rome is more descriptive than later versions of the attraction's script: “Glorious Rome, until consumed by the flames of excess. Imperial Rome, lost in the ashes of darkness.”

Much of the ride is the same today as it was during its opening in 1982: most of the major early scenes, such as Rome and the Sistine Chapel, have only had minor cosmetic changes over the years.

This version lasted just four years, however, before Imagineers opted to slightly refresh the script and ride experience. Original recordings are rare, but do exist; however, due to the fact that this iteration of the ride didn't stick around very long, it's mostly been lost to time.

In 1986, Spaceship Earth got a minor refurbishment – updating some of the minor effects, introducing the “Tomorrow's Child” theme song, and adding Walter Cronkite as the narrator. Cronkite hosted the CBS Evening News from 1962-1981, and in the process, became one of the most trusted figures in America. Naturally, his version of the attraction took a deliberately more straightforward tone than the Bradbury script. Cronkite's voice, with its trademark cadence, told the story even more clearly, allowing the beauty of the sets to work on their own, rather than exist in conversation with the language.

Also during this time, Epcot expanded wildly: The Living Seas and Wonders of Life pavilions opened in Future World, as well as the Norway pavilion in World Showcase. For many, the late 1980s and early 1990s represent Epcot's peak, and the Cronkite version of Spaceship Earth is emblematic of that era -- confident, high-reaching, and very smart.

Furthermore, Cronkite's history as a news anchor added another layer to the ride's overarching theme of communication. Here's someone trusted with bringing America the news, not just from the U.S.A., but also from around the world – an idea that represents the Epcot ideal perfectly. And above even that, Cronkite was highly respected in a way no broadcaster has been since, largely because many viewed him as their conduit to the world. His role narrating a trip through human history simply expanded that level of storytelling from the ride, and gave the whole experience an added sense of comfort and familiarity.

Judy Dench is the best. Soothing, to the point.

I still miss that great song: "Tomorrow's Child". Could probably fit with even the newest narrations.

Spaceship Earth was my first attraction at WED back in 1979 when I started. You wouldn't believe the number of story suggestions well after design was underway. Everybody had something to say about Spaceship Earth. "What about the Hindus? What about the Chinese? What about Tesla?" It was a great beginning with a great company that lasted another 17 years. The best scenes still hold up. Unsung heroes of Spaceship Earth were John Lindsey, Wathel Rogers, Peggie Farris, and Pat Scanlon....who never gave up.

How about just making it not break down every time the park is busy?

Education just doesn't work! "Freedomland" opened in the Bronx, NYC in 1960 as an east coast competitor to Disneyland. It was shaped like the USA, and was educational. For the first year.
The educational aspects were dropped for the second year. And then the fourth year was its last, killed off by the New York World's Fair.