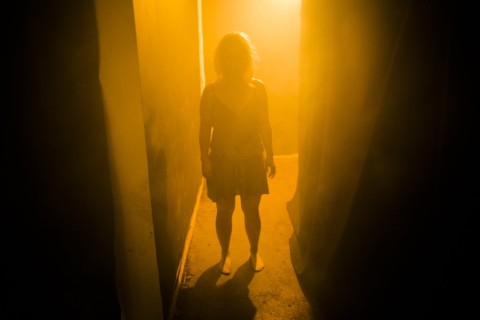 The world of extreme haunts is the newest and most intense wrinkle on the traditional haunted house formula yet to be cooked up.  Typically featuring an up-charge and always requiring its patrons to be at least 18 years of age, these over-the-top attractions are engaged in an ever-more-pitched battle to out-scare, out-shock, and, quite simply, out-overwhelm guests, leaving them nothing short of emotionally jarred, at the least, and mentally devastated, at the most.

Sound like hyperbole?  It’s not.  ScareHouse’s Basement (located in Pittsburgh, Pennsylvania) has its scareactors run their hands through guests’ hair and handcuff them to a chair, oftentimes while hooded.  Howl-O-Scream at Busch Gardens Tampa (Tampa, Florida) features the Experiment, which has participants shuffle through a series of tests designed to gauge one’s reactions to fear – including deploying live cockroaches, administering electrical shocks, and even asking guests to “murder” another patient by injecting him with a poisoned syringe.

And then there’s Scare Kingdom Scream Park (Blackburn, Lancashire, United Kingdom), which houses Psychomanteum.  Described by the park as “the UK’s sickest attraction,” it’s an “internationally infamous psychosexual full-contact scare experience, which in-patients must endure alone.”  The ending of this particular attraction has proven to be hugely controversial.

There are countless other experiences to be had across the Western hemisphere – some including cattle prods, full nudity, and, even, waterboarding – and they continue to grow on an accelerated curve with every passing Halloween season.  Given this multitude of misery to be had, there’s one simple question to be asked:

Why do we do this to ourselves?

The answers, it turns out, are quite revealing about who we are as a people, where we’re going as a society, and what we demand out of our entertainment, particularly the themed variety.

1. Our everyday lives are too secure, stable, and predictable

It turns out that life (in the first-world, at least) is rather, well, mundane.

Thanks to the ubiquity of technology, the marvels of civil engineering, and millennia of social and political evolution, the West has (largely) conquered the terrors of everyday life that have long afflicted humanity, from the omnipresent threat of predators to the physical ailments that typically cut lifespans short.  And while, yes, there is still poverty, mass shootings, and the silly belief that government is somehow intrinsically evil (at least in America), life has never been more secure or well-functioning.

And this just might be part of the “problem” that extreme haunts are attempting to address.

According to psychologist Stuart Fischoff (as relayed by the Wall Street Journal), “Most of us live ordinary lives with few high-intensity moments, and horror provides that rush we're impoverished of."  In lieu of being chased by a mastodon, we allow a man with a mask (or cattle prod) to do so; because the danger of being mugged or assaulted is statistically the lowest it’s ever been in recorded times, we simulate those thrills in an amusement park (and, perhaps, stretch the definition of "amusement" in the process).

It’s not enough to get that visceral reminder of the survival of the fittest vicariously, the theory goes, through film or literature or videogames – we still need to experience it ourselves, and, what’s more, we need to trick ourselves into believing it’s real (enough).

2. The law of diminishing stimulation

In economics, there’s something called the law of diminishing returns, which says, basically put, that the more of a controlled factor you throw into the mix – say, employees on an assembly line – the less likely they are to be productive after a very certain point.

The same is very much true for us psychologically; the more repetitive a certain element gets in our lives, the less impact it holds for us, whether it be a titillating picture or a charged symbol.  It’s somewhere between desensitization and chemical dependence – at some point along the line, the effect produced dwindles on a very steep curve, and it takes more to make us feel that rush. 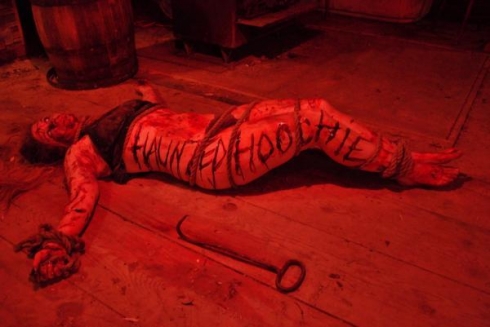 Themed entertainment is, of course, no exception to this rule.  Now that theme parks are 60-years-old and haunted houses have been around for over a century, their standard fare has seemed to become less stimulating.  Those individuals who have been attending haunts for the past three or four decades – and, in an extremely interesting sociological twist, it is the same group that keeps coming back for more ever since the 1970s, no matter how old they get – want to recapture that same jolt of fear that they first experienced in their youths.

The only answer?  Up the dosage.