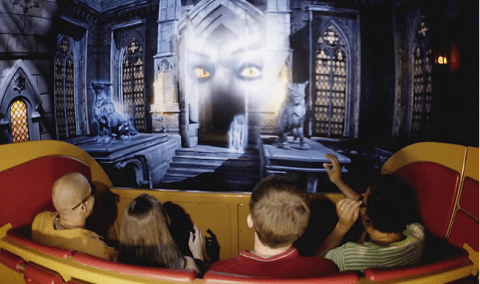 Ah, the return of the dark ride! After years of being almost exclusively reserved for Disney and Universal’s destination resorts where movie tie-ins are a must, seasonal family parks are finally coming back around to recognizing that a park without dark rides is an incomplete park! Think about it... Cedar Point may have a lot of coasters, but (so far) there's not a single indoor dark ride or coaster. How weird is that?

Recognizing the problem, in 2013 and 2014, Cedar Fair went big on dark rides. First, they completely renovated the two classic ones at California’s Knott’s Berry Farm, just a few miles from Disneyland. Shortly thereafter, they premiered a world’s first interactive dark ride coaster with Canada’s Wonderland’s Guardian. 2015 and 2016 saw the opening of a brave new dark ride for Six Flags, so now we've updated our list below of the top 12 dark rides worldwide that you can't find at a Disney or Universal park!

Could it be that the dark ride is poised for a come back? And why shouldn’t they? Dark rides are family rides in the best sense. They can appeal to young and old, and everything in between (even teens)! To prove it, here are a few really spectacular Disney-quality dark rides that Walt himself would probably be proud to have in his parks. Which of the following would YOU most like to experience? 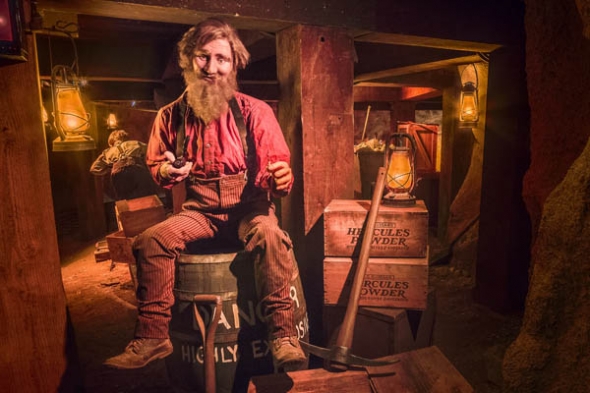 An absolute classic, Disney Imagineers cite Knott’s Berry Farm’s Calico Mine Ride as the inspiration for Disneyland’s Frontierland adventures just a few miles south, up to and including Big Thunder Mountain Railroad. The dark ride opened in 1960, carrying a trainload of folks into the massive mining operation of Calico. The main attraction then and now is a towering “Glory Hole” that the train passes three separate times on three separate levels with an entire crew of miners hard at work. 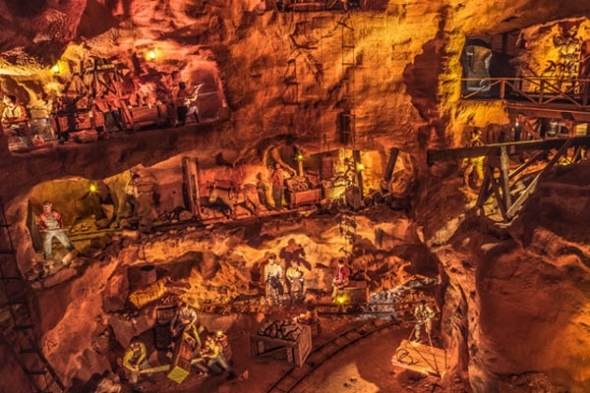 By the 21st century, the ride was feeling distinctly dated, so Knott’s (under the supervision of Cedar Fair’s new CEO, a former president of Disneyland Resort down the road) poured money into the project, re-building the ride from scratch with local specialists Garner Holt Productions, Inc. (who work often with Disney) to create a brand new, updated version of historic ride. It now includes 50 more animatronics (bringing the ride’s character total to 120 – more than Disney’s Pirates of the Caribbean) and updated show scene lighting and sounds. As classic as ever, the ride's now infused with more life than ever. 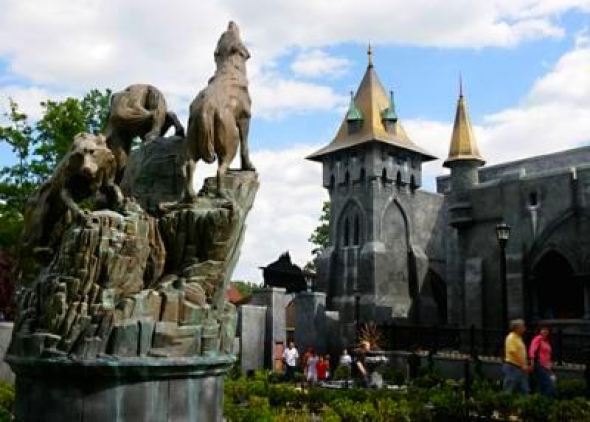 Universal stunned the industry when it developed the roving, 3D motion simulator technology behind The Amazing Adventures of Spider-Man in 1999. As motion-base vehicles spin, slam, rock, and race through a physical show building, they pull up to 3D screens integrated perfectly into physical sets surrounding. Few examples of the super-advanced technology exist – even today – but it’s very surprising that the second such ride ever built appeared at a seasonal park in Virginia.

But venture through the deep forests of Virginia and visit Busch Gardens' German-themed Oktoberfest area and you'll find ancient copper towers and stone wolves flanking cold turrets rising above the trees. You've stumbled on DarKastle, home to the dark King Ludwig who, long ago, took over the kingdom from his parents who "mysteriously" vanished. Mad Ludwig transformed the castle into an impenetrable fortress. When his advisors tried to overthrow him, he laughed and threw a lavish winter festival in their honor, taking them on a tour of the castle in his fleet of golden sleighs... They were never seen again, of course.

And now, those golden sleighs are waiting for you (though they now glide into the castle's loading dock stable without horses attached) to see what awaits inside. 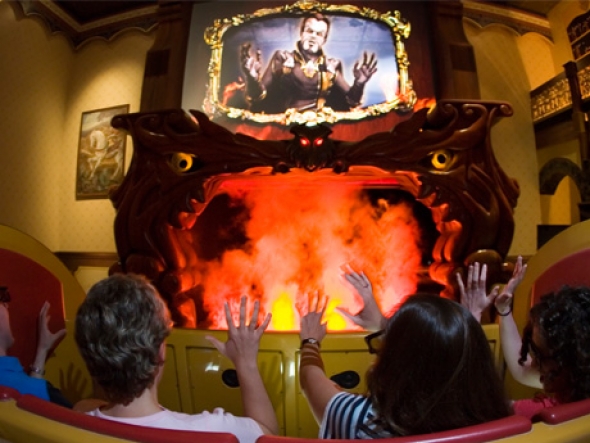 The tour takes you through the castle's armory, kitchen, observatory, and library where Ludwig's (family-friendly) wrath awaits. Just when you think you know what DarKastle has in store, the spirit of the Queen arrives to finally face her son. ("Mother, they're mine!" "Not this time!") What follows is a wild flight around the collapsing castle and (of course!) a dizzying finale where Ludwig reveals his true form and sends the sleigh crashing down onto (and through) a glass dome. Sadly, the park has for some reason seen fit to tone down the ride's once-Spider-Man-level motion, but for having a winning story and re-using Spider-Man’s tech in unexpected ways, it certainly wins big. 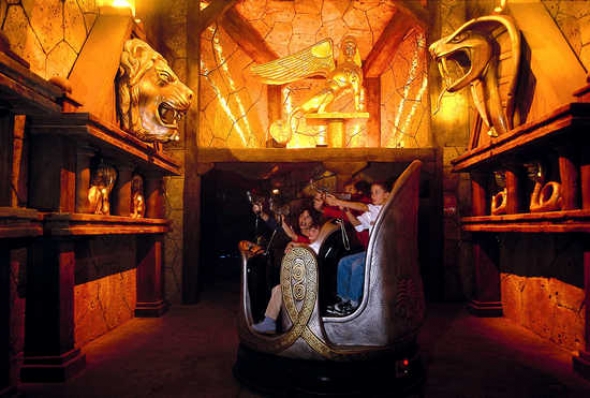 Sally Corp. is a famed and beloved dark ride manufacturer commonly known for their simple blacklight rides. But given the right budget, they go all out. Enter “Labyrinth of the Minotaur,” only at Spain’s Terra Mítica. The fantastic, built-out dark ride features trackless vehicles that can revolve to face particular scenes, complete animatronics, and one really, really cool feature: riders who don’t score enough are ejected from the ride at 2 early-exit points.

Instead of competing, guests have to work together to keep their collective score high. Only teams who can do so get to the climactic finale, which features six twelve-foot-tall Minotaur animatronics in a dizzying finale showdown. Long story short, Minotaur gives a practical and interesting twist to the somewhat tired “interactive dark ride” genre and does so with a style that far exceeds Disney’s Buzz Lightyear rides, for example. You can view the ride’s layout (with its ejection points) here. 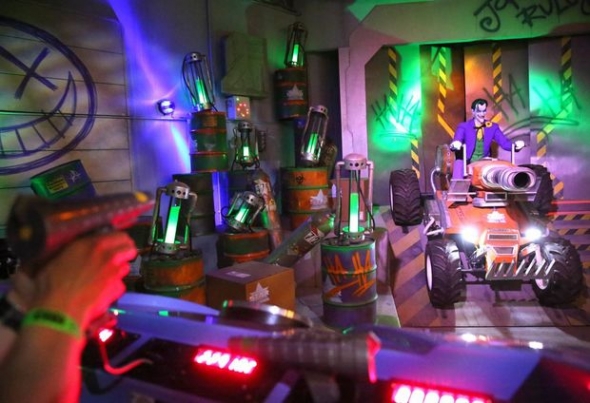 Frankly, we're not huge fans of "interactive" dark rides (see, laser guns), which so often rest on their point-and-shoot laurels and forfeit story, characters, or effects. But Justice League: Battle for Metropolis is a wonder. A few impressive, full animatronics figures, a pretty compelling storyline, and a smart "budget" version of the motion-simulating base in some of our favorites. 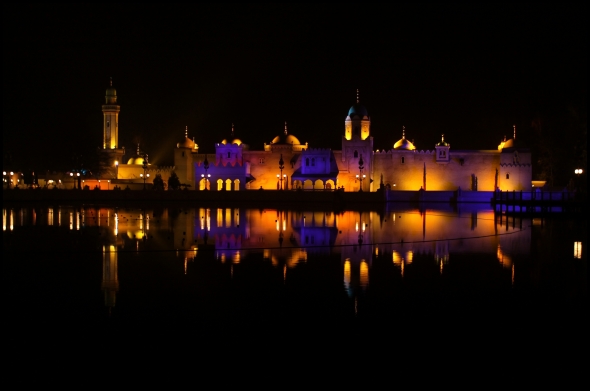 Located in the enchanted forests of the Netherlands, Efteling is a historic and gorgeous park on par with (and predating) Disneyland's charm and romance. Originally based around a walkthrough fairytale forest, Efteling today is a fully-formed theme park of wonderful rides, often harkening back to its storybook origins. Chief among them is a host of dark rides that continue the park's fairytale settings, like Fata Morgana – the Forbidden City. Built in 1986, the ride is clearly Efteling's take on Pirates of the Caribbean (fair, since many Disneyland tennants were taken from Efteling).

The 10 minute dark ride features 140 animatronics recreating the stories of 1001 Arabian Nights. The boat ride drifts through a jungle, the poor district of town, a prison, a harbor, and more, all alive with bustling activities, sounds, lights, and people. Truly a wonder on-par with Pirates at Magic Kingdom, Fata Morgana is a must-see. 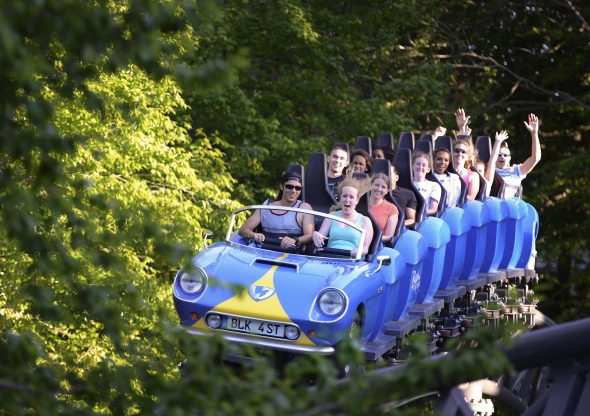 An outlier on this list, we'd be remiss if we didn't include Verbolten, the multi-launch roller coaster at Busch Gardens Williamsburg (located, coincidentally, in the same Oktoberfest section as Curse of DarKastle). Making your way through Gerta and Gunter's Tours & Rentals, you learn that your gorgeous tour of the German countryside is about to begin! You'll see castles, meadows, seashores... "But," warns Gerta, "you must not go near the Black Forest. It is strictly verboten!" Of course, just a few turns out of the station, the ancient stone wall comes into view and the car takes off.

What follows is a darting, twisting, turning race through the sinister bioluminscent plants of the Black Forest. Surprisingly built-out, the floor-to-ceiling trees and branches of the gnarled woods come shockingly close as the coaster train darts around the single source of light: the glowing moon. Then, the train slows and encounters a static dark ride scene of theatrical lighting and sound where one of three different scenarios come to life: either a pack of sinister wolves surrounds the train, a raging lightning storm shakes the forest, or the riders become entranced by the siren-like chanting of the forest's guardian spirit.

After an unbelievable and world-class secret hidden in the forest, the train accelerates out of the dark ride and through a rousing roller coaster finale. While it may be a family coaster in disguise, Verbolten is also one of the smarter and more fun dark rides out there, impressive from start to finish. 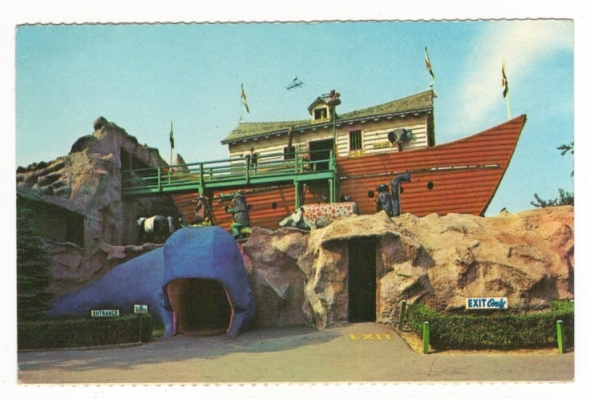 There was a time when you could barely manage to find a park without a Noah’s Ark dark ride. Now, there is one left. One. In the whole world. Kennywood near Pittsburgh, Pennsylvania has always prided itself on its dark ride culture (with one dating back to 1901) and has taken special care to keep its Noah’s Ark open. The walkthrough ride is part classic fun house and part balancing act, as its lack of ADA compliance betrays its 1930s opening.

The ride was given a "modern" updating in the 1990s with a new “crashed elevator” intro leading to skeleton-infested catacombs that terrified a generation of '90s kids, but in 2016, Kennywood went above-and-beyond to revert the classic to an earlier, more nostalgic recreation. Everything old is new again, including an iconic entrance down the squishy tongue of a water-spouting blue whale. On-board, the attraction challenges guests to climb to the Ark, which rocks precariously back and forth all day and night. Inside, riders fall against walls and step on tricky floors while navigating the Ark’s tight corridors past animal animatronics and optical illusions. Oh, and there are ultra-tight, long stairways that lean forward and backward as the Ark rocks… Yikes! Still, Noah’s Ark is a total classic and absolutely a perfect balance of timeless thrills and historic dark ride gags.

"It’s unclear why Pennsylvania has done such a good job of maintaining old dark rides..."

it's because we want to forget we're in pennsylvania

You mentioned it at the beginning... Wonder Mountain Guardian and Journey to the Iron Reef. Surely both these rides are in the top 12.

There is more than one Noah's are still existence in the world. Blackpool Pleasure Beach has one and has been there since the 1930s. Why can't you report facts that's true.

Technically the ark in Blackpool Pleasure Beach is just decoration now. It was closed in 2010 I believe when the improved the entrance to the park. Kennywood has the world's only operating Noahs Ark in the world.

Noah's Ark at Kennywood has been restored back to the original entrance with the whale starting this year.