ABANDONED: Inside the Epic Life and Closure of the World's Largest Theme Park 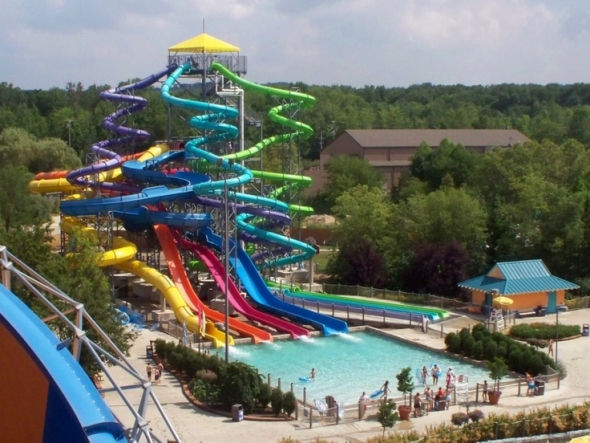 While the former Six Flags side of Geauga Lake lay overgrown and entirely bulldozed, the water park that Cedar Fair had built over the remains of the SeaWorld side did continue along, re-opening in 2008 as GEAUGA LAKE'S WILDWATER KINGDOM – its name as a supposed testament to the former park. It contained one multi-slide complex, one ProSlide Tornado, a water play fortress, a lazy river, and a wave pool. 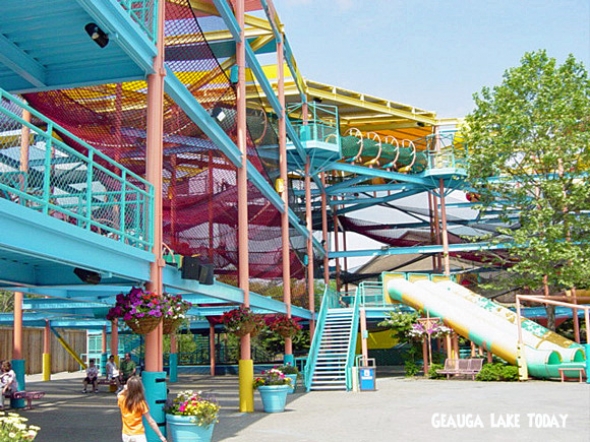 The diminutive park never got its Phase II expansion. Even the Happy Harbor area that had shared its side of the lake – above, the only remnant of SeaWorld – was demolished. Why the water park couldn’t have made use of the climbing nets, 4D theatre, motion simulator, and family flat rides, we may never know.

They, too, were obliterated (see below) apparently just so that the empty lot could be fenced off to become overgrown. Why that would be preferred to a climbing area and family flat rides, who could say?

For eight years, the diminuitive, tiny water park continued to operate (and for a very short time each year, given Ohio's cool springs and autumns), its only addition ever being The Beach - Family Fun Area, with giant chess pieces and beanbag toss games. Year after year, the park went without sizable investment – a sure signal of its priority. (And to be fair, Wildwater Kingdom was the only standalone water park left in Cedar Fair's portfolio, the rest having been sold off one-by-one in the 2010s).

Anyway, the park got its seventh name change when the wound-opening “Geauga Lake’s” prefix was dropped in 2011. WILDWATER KINGDOM continued to operate, without a single a new addition since 2006’s wave pool.

And imagine it: To get to Wildwater Kingdom, guests followed signs to Geauga Lake (ouch), joined a few dozen other cars in SeaWorld's old parking lot, built for thousands (ouch), would pass through the front gate and entry boulevard that had been SeaWorld's entrance for decades, now devoid of its iconic dolphin water fountain (ouch), and gaze across the lake at the single feature that could be seen there – the Big Dipper – where once a skyline of 100-foot roller coasters stretched across the entire lakeshore (ouch).

Then, on August 19, 2016, Cedar Fair pulled the plug. After trying for years and years to sell the abandoned amusement park side of the property, they announced that they'd worked closely with the city and township to determine that for any of the property to move forward, the entire property needed to be redeveloped, adding that "[a]fter examining its long-range plans, Cedar Fair has determined that the time is right to begin this transition..." In layman's terms, after its seasonal closure on September 5, 2016 Wildwater Kingdom would never re-open. And that was that.

It's no doubt that in the decade it stood alone, Wildwater Kingdom became its own destination for local families and inspired new memories for a new generation. And for that generation, another round of mourning begins.

Inexplicably thrust from a family amusement park to a mega, world-class theme park and back again, the little local water park that remained wouldn't return in 2017. Wildwater Kingdom – all that remained of Geauga Lake's 130 year history – was sunk.

Imagine if you will…

In 2001, Ohio was home to Six Flags Worlds of Adventure. A dozen innovative and record-breaking coasters, a full marine life park with killer whales, dolphins, penguins, sharks, and tigers, a charming Looney Tunes children’s land, and a full Hurricane Harbor water park. Just seven years later, it was gone. Completely gone. Barely a single shred of it remains. Practically no evidence that the land was anything but a vacant lot.

Once in a while, people will circulate petitions try to bring back Geauga Lake, no doubt expecting that it could one day see a Kentucky Kingdom style rebirth. "Re-open Geauga Lake!" they announce. Amusement park fans ask, "Reopen what?" There's barely anything left of the "Wild Rides" side of the park. Concrete footers sunken into the swampy lake, a few sheds with every piece of copper and plumbing pulled out, broken brick paths, and a 91 year old roller coaster that's been standing but not operating for a decade – arguably unsalvagable... The property is dead. Wiped clean.

You can no doubt imagine why locals still curse Cedar Fair and its then-CEO Dick Kinzel as a greedy expletive who bought Six Flags Worlds of Adventure, maliciously intending to close it to eliminate Cedar Point’s competition. Many believe that he planned from the beginning to use Geauga Lake as spare parts, distributing its rides to the chain's other parks with no care for its history or value in the local economy.

Of course, we can’t say for sure that the intentions of Cedar Fair were nefarious. Can we agree that they overreacted by shutting the entire place down when the chain operates parks that are fractions of the size and scope and never seems to deem them unfit for operation? Probably. And should they have closed the park for the season, then immediately announced, “Oh, by the way, it’s closed forever?” Definitely not. It was a bad decision at a different time by different management.

Anyway, over more than 130 years and through seven name changes, Geauga Lake went from a timeless family amusement park to an international theme park packed with killer whales, ski shows, record-breaking coasters, dark rides, simulators, dolphins, water slides, and super heroes! Who could ever have guessed that that mega-park – a combined Six Flags, Hurricane Harbor, and SeaWorld – would just a few years later become this... 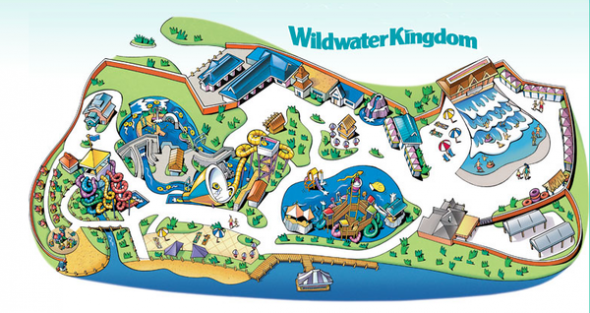 ... before even that disappeared forever.

What – or who – is to blame? We'll dissect the reasons behind the park's death on the last page. Read on...

The distinction between "theme" park and "amusement" park aside (either fits here, and who cares anyway), Six Flags World's of Adventure was far and away the largest on Earth. Read the article. It was larger than Animal Kingdom, which is the current reigning champion of "theme" parks, and larger than Six Flags Great Adventure which is the largest "amusement" park now. Read the actual article.

Thank you for this article. I remember going to GL as a little kid with my parents in the early 90s. I randomly thought back to GL and was curious to see what was new with the park...to find out that it is gone truly broke my heart. I remember watching the Egyptian shows at night in GL and seeing all of the lights from Sea World across the water...such great memories. Thank you again.

ok heres a little known fact-the Kenny family-the family that originally owned kennywood-was at one point in talks to buy Geauga lake and turn it into the kind of park they wanted to turn kennywood into but couldn't due to land issues-one with some sort of hotel, a lot of the older rides that you cant find anywhere anymore, etc. but then for whatever reason they got out of the business. imagine if they had gone through with their plans.also in my opinion it used to be about providing family fun now its all about the all mighty dollar. such a shame really.