ABANDONED: Inside the Epic Life and Closure of the World's Largest Theme Park

Sincerely overnight, little Geauga Lake – the family park located amid the tiny towns of Northeast Ohio – had become Six Flags Ohio, with a dozen coasters, each taller than the one before. The park was quite literally not your grandfather’s park. If you took him, he might not recognize it! This was a new Geauga Lake for a new millennium, and the park now counted itself as a jewel in Six Flags' crown of thrill parks. And don't forget, all the while, SeaWorld Ohio sat across the lake in a harmonious relationship with Six Flags – two parks run completely independendly, nestled up against one another. 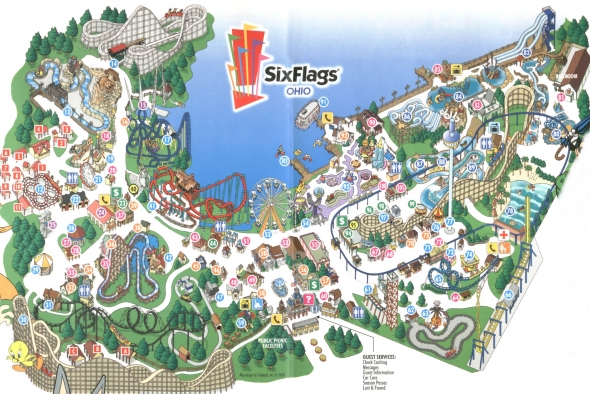 Consider how odd it really was, though: For thirty years, visitors of SeaWorld would sit in a stadium on the water’s edge and watch a ski-show, with the hundred-foot-tall roller coasters of another amusement park as the backdrop! Likewise, visitors to Six Flags Ohio would glance across the lake and see the distinctive clamshell stadiums of SeaWorld nestled into the hillsides. It’s an odd dichotomy that’s not seen anywhere else on Earth to have two such preeminent theme park brands peacefully sharing opposite shores of a lake.

Eager to enter into the 21st century, SeaWorld’s parks in Orlando, San Diego, and San Antonio began to emphasize adrenaline-packing thrills at the dawn of the new millennium. Formerly operating more like zoos than amusement parks, suddenly SeaWorld was in the business of coasters, simulators, and thrill rides to punctuate its sea animal shows. That was all well and good, as SeaWorld Orlando opened Kraken (2000) and SeaWorld San Antonio upped its arsenal with Great White (1997) and Steel Eel (1999). It was a very intentional choice to shift the parks into competition with roller coaster parks, and it has served SeaWorld well even unto today.

But rides were not coming to SeaWorld Ohio.

There are conflicting theories as to why SeaWorld Ohio was not building thrill rides the way that its sister parks in Florida, Texas, and California were.

One theory is that local ordinances forbade such expansion at Ohio’s SeaWorld park. The county line, it seems, runs right down the middle of Geauga Lake, and SeaWorld’s side of the lake couldn’t build structures over a certain height or noise level, making coasters impossible.

A second version of the story is that SeaWorld couldn’t build coasters thanks to a long-existing non-compete agreement with Geauga Lake / Six Flags Ohio.

A third is that, under new management and branding, Six Flags Ohio refused to continue the cross-promotions that had helped the two parks co-exist for three decades, from which SeaWorld’s attendance was suffering. 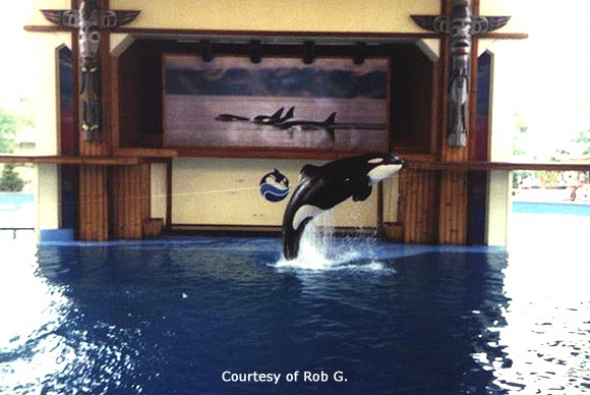 Either way, the story goes that SeaWorld (then managed by Anheuser Busch) was ready for a change. Allegedly, the company offered to purchase Six Flags Ohio in hopes of managing both parks and keeping harmony in advertising. Though we don’t know, it’s safe to guess that the thrill park might’ve been branded as Busch Gardens Ohio, absorbed into the other park chain owned by Anheuser Busch… It's odd to imagine how things might be different if that had happened.

Six Flags allegedly declined SeaWorld’s offer, but counter-offered to buy the marine park! The deal went through. For just $110 million, SeaWorld folded and sold its Ohio park to Six Flags, taking their animals with them. Six Flags quickly re-populated the animal park with their own (mostly borrowed from Six Flags Discovery Kingdom in California) and did the unthinkable...

After just one year as Six Flags Ohio, the park opened in spring 2001 as SIX FLAGS WORLDS OF ADVENTURE, combining the two parks into one. A new forested path along the lake’s edge and a floating boardwalk united the former SeaWorld and Six Flags into a giant, 700-acre mega-park that offered a full marine life zoo, a full thrill park, and Six Flags’ Hurricane Harbor water park. Six Flags was fond of advertising Worlds of Adventure as three parks for one ticket, and it really and truly was - each was large enough to stand as its own gate. In fact, they had been! 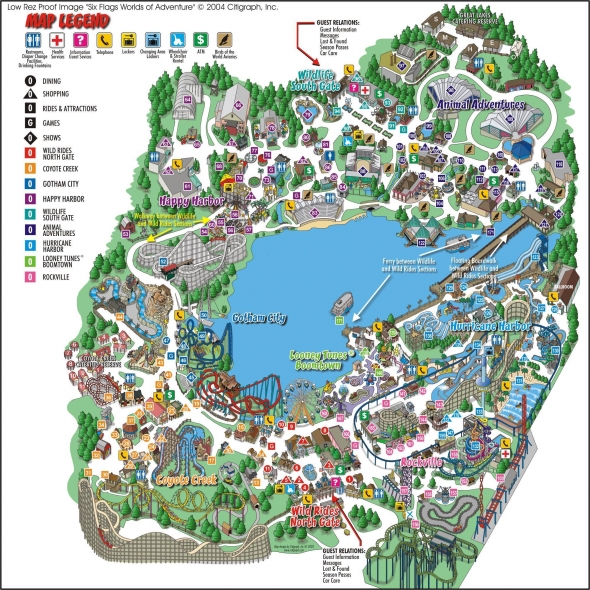 The park map alone is astounding and worth zooming into and exploring, and doing so will help make sense of some changes we'll see soon… On the map, you can see SeaWorld staples in the same park as Six Flags rides – Superman roller coasters, killer whales, Batman water ski shows, pearl diving, a motion simulator, Happy Harbor, penguins, and Looney Tunes, all for one price! Two parks – each with their own themed lands – were brought together. Truly astounding. For locals who recalled being at one and gazing at the other across the lake, they could now walk between them. Or take a ferry. Or a forested path. Two parks that had been independent for decades were now connected.

The largest theme park in the entire world, Worlds of Adventure seemed a park enthusiast’s wildest dream. Those three decades of harmony between two dissimilar parks had come to a head in their union.

It was unthinkable and somewhat mind-boggling that Six Flags Worlds of Adventure could exist at all, so perfectly divided into "Wildlife" and "Wild Rides" sections, each on opposite sides of a beautiful lake. In other words, they couldn’t have built the park more conceptually interesting if they’d tried. Everything theoretically fell together in a really picturesque and wonderful way. It felt like Worlds of Adventure was a new kind of theme park, poised to become a new flagship, even against the infallible Cedar Point.

This was a well-written & sad article! I am in my late 30's & remember going to Sea World (always hated it) & Geauga Lake as a kid &teens & always had a blast! I was born & raised in Pittsburgh, but I have tons of family throughout Ohio, so It was common for us to frequent GL & meetup with family there. Ironically, I never visited while it was six flags, but I did go back up in 2006 after it returned back to Geauga Lake & my kids & I enjoyed ourselves. It makes me sick to my stomach to see how greedy corporate companies decided not to put the patrons first & destroyed a wonderful park! GL was like our 2nd home in Ohio when we were not at Kennywood in Pittsburgh.

But don't be too quick to suggest the owners of Kennywood to purchase the land because ever since they bought the park, we Pittsburgh locals have noticed a steady decline in the quality of park it used to be, as opposed to when it was owned by the local family here. Corporate greed is always a recipe for disaster when it comes to consumers!

Geauga Lake was a wonderful place! we used to buy season passes and get dropped off on weekends and after school! It is so sad that my children will never get a chance to experience the rides and whales in Ohio! The biggest shame of the entire thing is that no one stepped up to the plate to save it!

The final nail in the coffin will be when they allow a Meijer Superstore to be built on the site. Apparently there's no significant historical value here?

I went to Worlds of Adventure in 2004 and the park was okay. Probably not a good idea to stop there after cedar point. Our closest park is six flags great America which has some really great coasters too. So going to worlds of adventure, the rides weren't at all scary. Some seemed old (raging wolf bobs killed my back....worst wooden coaster I've ever been on). I didn't know anything about the park before it turned to six flags so I'm assuming it was better than when we went. I don't have anything horrible to say about it, it just wasn't worth driving 5 hours to go to again when I could drive to cedar point. I wish I could have seen it in its hay day and I am really sad to see it go under. It had such potential!

it is pronounced gee-aw-guh, not gee-ah-guh. i've never heard anyone pronounce it that way. never.