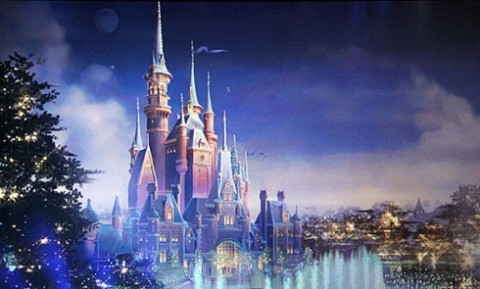 The theme park industry continues to perform well, despite the woes that have hit the global economy since 2008. In fact, there are dozens of new theme parks under construction (or soon to be) all over the world, including new parks from the likes of Disney, Universal and Six Flags. Although many of them are in the growing Asian market, there are also plans for new parks in Europe and the USA.

Every month, Theme Park Tourist rounds-up the new theme parks that are in the pipeline for locations all over the world. As well as a description of what’s in store at each park, we also look at progress on funding and construction.

For globe-trotting theme park fans, there'll be a whole host of new destinations to travel to by 2019. Take a look at what could be in store, and let us know which new theme parks you are most excited about in the comments section below!

Status: Under construction Opening in: 2016 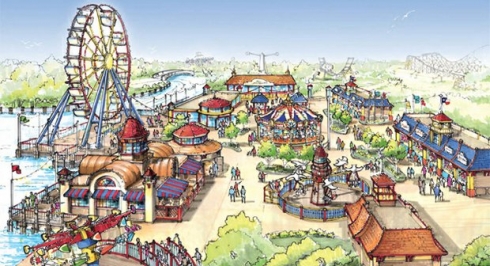 The Grand Texas theme park will be just one element of a 610-acre sports and entertainment district, which will incorporate the 150-acre theme park, a 40-acre water park, an 83-acre sports complex, an RV park with 144 lots, 240 hotel rooms, a 43-acre auto racing area and 450,000 square feet of retail and dining. 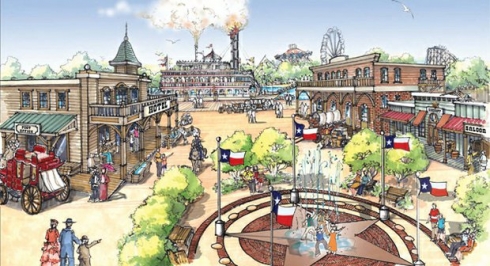 Located near the intersection of Highway 242 and Highway 59, the resort hopes to draw 1.2 million visitors every year. It is set to focus on the history of Texas, with the theme park itself hosting roller coasters and off-the-shelf midway attractions, and will initially span 71 acres before expanding to the full 150 acres further down the line.

The latest: The Big Rivers Water Park is set to begin construction in September 2014 ahead of a June 2015 opening date. The sports complex should open earlier than that, in March 2014, alongside the RV park. The theme park itself is not expected to open until 2016. 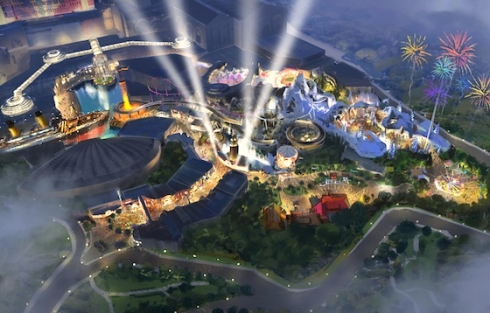 Status: Under construction Opening in: 2016 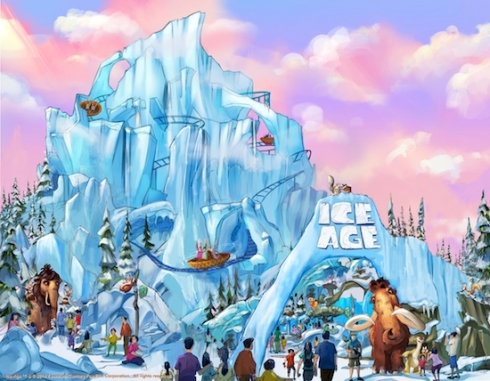 Here's a piece of artwork for an Ice Age-themed roller coaster, which looks it may have been inspired by Disneyland's Matterhorn Bobsleds.

The latest: Twentieth Century Fox World will replace the former Genting Highlands theme park, which is currently in the process of being completely flattened (you can see some shots of this over at ThemeParkX). 20th Century Fox’s Greg Lombardo has confirmed that, in fact, the site will not just be levelled, but there will also be considerable digging to enable large sections of the proposed dark rides to be housed underground. 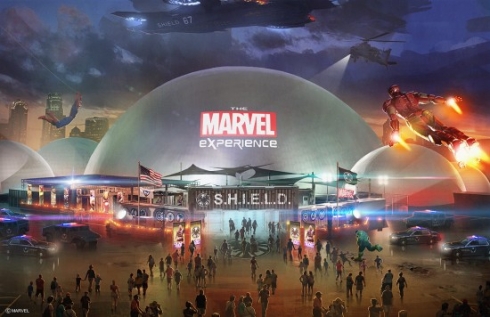 We're still waiting for Disney to announce its first big Marvel theme park attraction in the US after acquiring the comic book firm in 2009, although a Marvel-based land is on its way to Hong Kong Disneyland. But Los Angeles-based Hero Ventures is planning to bring a travelling experience (which - at a stretch - we can just about call a roaming theme park) dubbed the Marvel Experience to the US in late 2014.

Located inside the 80,000-square-foot, six-story-high "Mobile Command Center" (similar to that seen in Thor) will be a 4-D simulator ride, several 3-D animated short films, virtual reality and holographic simulators and - of course - a bunch of retail stores. The total cost is estimated at $30 million.

The latest: It looks as though things may be behind schedule on the Marvel Experience, which was initially touted as touring “throughout 2014” and currently merely listed as appearing “later this year”.

We do know that the Marvel Experience has teamed up with attraction director Jerry Rees and visual effects experts Rhythm & Hues & Prana and Lexington Design & Fabrication on the project. The tour is promised to include more than 20 Marvel characters, as well as boasting the world’s first traveling 360-degree stereoscopic 3-D dome theatre. 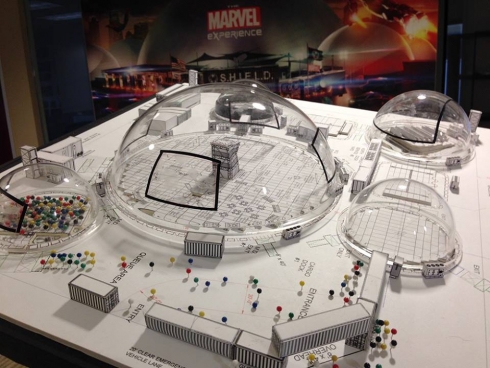 We don’t have any tour dates yet for the Marvel Experience, so in the meantime we’ll have to make do with the model above!

Plans for a new Paramount-branded theme park in Spain have been mooted for several years, but it still appears to be stuck in development hell. If the work really does go ahead this time, then the park will be only one element of a massive resort boasting no fewer than seven hotels, a "lifestyle" centre, a convention centre, an exhibition hall, condos, a casino and a mall. 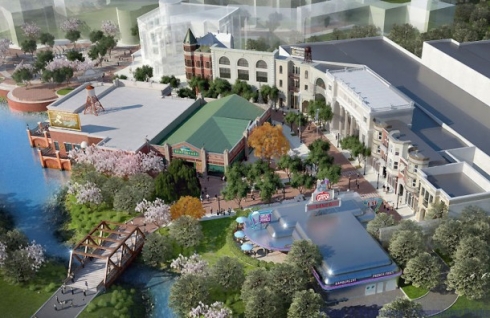 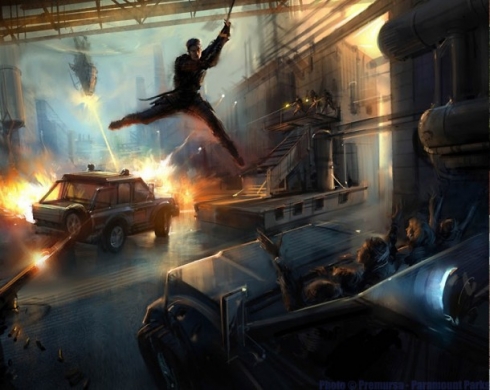 Paramount Park will be made up of several themed lands, each hosting attractions based on movie and television franchises. The first of these will be Paseo Paramount, a larger-than-life avenue of shops and restaurants. It will empty into a "hub" on the edge of a lagoon. Adventure City will sit to the left of the hub, with Plaza Futura on the right (clearly, "inspired" by Disneyland's Adventureland and Tomorrowland).

Adventure City will not, in fact, be set in a jungle a la Disney. Instead, it will be anchored by a ride based on Mission: Impossible, based on the same technology as Universal's Amazing Adventures of Spider-Man. 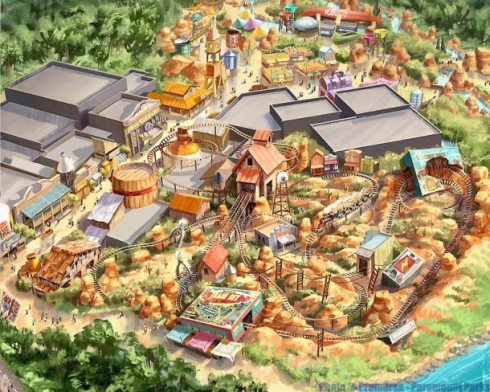 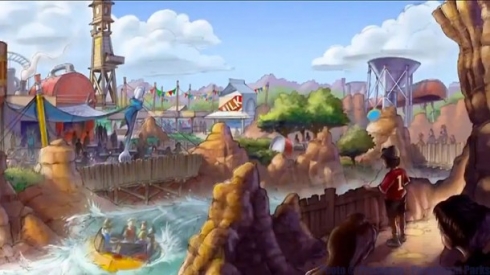 The park's equivalent of Frontierland will be Rango's West, based on the 2011 animation by Gore Verbinski, which starred Johnny Depp as a pet chameleon lost in the Mojave Desert. This will be anchored by a family mine train roller coaster named Spirit of the West, similar in style to Disney's Big Thunder Mountain. 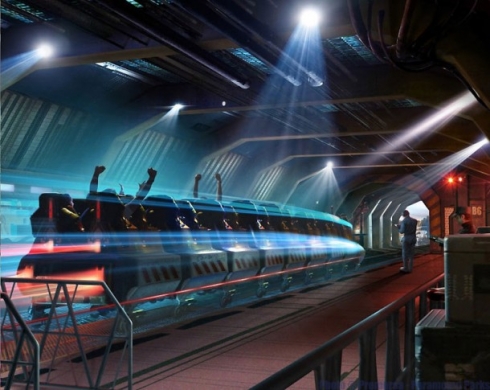 Plaza Futura, meanwhile, will be primarily themed around Star Trek. It will host a Star Tours-style simulator ride, as well as a 100-foot-tall outdoor roller coaster dubbed "Warp Speed Coaster". It will also host a War of the Worlds themed restaurant.

You can find out more about Paramount Park in this original write-up of the plans.

The latest: After the announcement of the detailed plans early this year, we’re still waiting for confirmation that funding is in place and construction of the resort can go ahead. There’s the usual speculation that the project is dead in the water, but there’s been no announcements of the project’s death, either. Watch this space.

Status: In negotiations Opening in: 2018

According to the Hollywood Reporter, the Beijing park would cost around $2 billion and would be built in collaboration with a local state tourism company. Construction is said to be due to start in late 2014, although we've heard such rumors before. The Beijing Tourism Group will provide the land, while Universal will design the park.

The latest: Things are looking a little muddled on this particular project. While photos posted on the ThemeParkX forum suggest that work may already have begun to clear a site, Universal Parks & Resorts Chairman Tom Williams was quoted by Nikkei as saying that there are “no plans to build a theme park in China at the moment”. 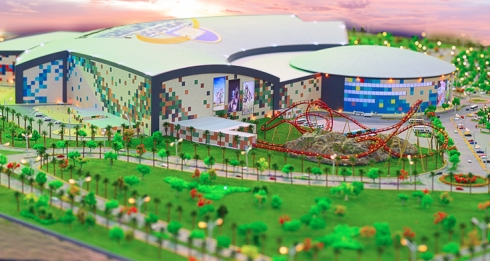 The Marvel Experience won't be the only Marvel theme park to open in 2014 without the involvement of Disney's Imagineers. Back in 2012, the Disney-owned firm signed a deal with Dubai's IMG Group to open a 350,000-square-feet indoor attraction containing retail outlets, restaurants and "interactive entertainment experiences". 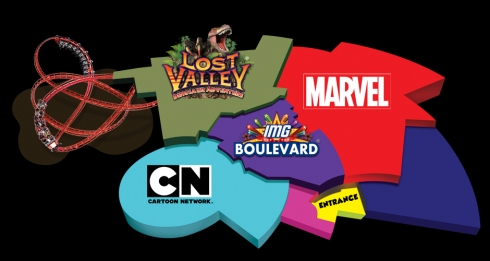 Marvel will only be represented in one of the lands at IMG Worlds of Adventure. The other three areas will be Lost Valley-Dinosaur Adventure, IMG Boulevard and the child-friendly Cartoon Network (based on another set of licenses properties).

The latest: The park’s official website is up-and-running, albeit in an under-construction state (much like the park itself). Although work is well underway, we think that the mooted 2014 opening date is a little ambitious. 2015 seems more likely, but it could be even later. 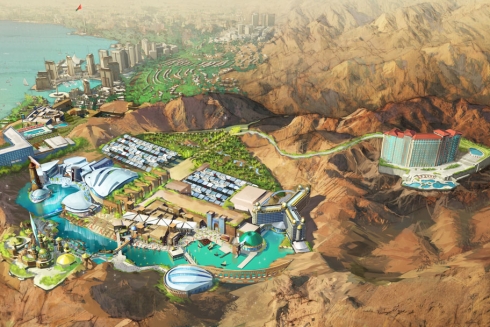 Though it is often referred to as the "Star Trek theme park", The Red Sea Astrarium will actually consist of a combination of dining, retail, nighttime entertainment venues, shows and rides. The headline attraction, though, will indeed be the Star Trek Experience. The whole shebang will be located on the shores of the Red Sea, hence the name.

Among the attractions promised for the resort are a "time-travel flight simulator" to the Wonders of the World, a huge fountain show, a show in a 3-D dome, a themed dining show featuring stage magic and illusion, a 600-seat theater and the Star Trek attraction. This is set to feature a "space-flight adventure", and will be developed in conjunction with Paramount Recreation.

The latest: This project had all the appearances of being dead in the water until a recent interview with Paramount’s Executive Vice President of Licensing, Mike Bartok, appeared on industry website Blooloop. In the interview, Bartok stated that Paramount is “fairly far along” in completing a video production for the Red Sea Astrarium, working with Lost production company Bad Robot. Bartok also said that the film will be used in the “first ever attraction ever made to be 4D with actual freefall mechanisms in there”.

We need an other one in Illinois. Preferably, In or near Chicago.