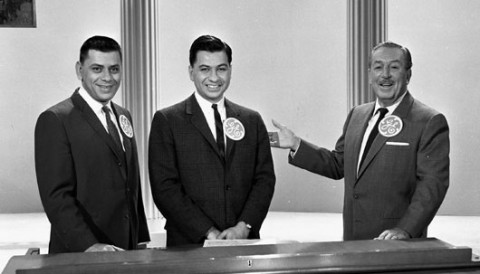 What makes a Disney attraction special? That's the question that countless other theme park companies have attempted to answer since Disneyland first opened in 1955. Most are no closer to an answer today then they were six decades ago.

But one factor has unearthed itself over time: background music.

Disney prides itself on having perfectly synchronized, wonderfully thematic background music for almost every attraction. And if the ride doesn't feature music, you can be sure the queue will.

Why? Well, themed attractions have their roots in film (all of Walt Disney's original Imagineers were, of course, filmmakers) and background music is an essential part of most movies. Composers construct scores that reflect, expand, or relate to the action on screen, and the goal is to give the viewer a more fully resonant emotional experience.

Disney attractions are no different – most seek to give the guest some sort of emotional experience, be it exhilaration (Space Mountain), comfort (Winnie the Pooh), nostalgia (Carousel of Progress), or any other state. And so, when Disney constructs a new ride or show, they have a composer create a unique score for that attraction. Those people – most of whom you've never heard of – deserve their own special thanks.

Here are seven Disney composers who have no doubt brightened your day with their work.

If you're a lover of Epcot, you owe Bruce Broughton a very big “thank you.”

Broughton's work can be heard throughout the park, but long-time visitors are probably most familiar with his work on Ellen's Energy Adventure (which you can hear above). The thrilling, adventurous horns and strings are, arguably, one of the best parts of that attraction – well, other than the animatronic dinosaurs.

But Broughton's reach in Future World doesn't stop there: He was also responsible for the updated soundtrack to Spaceship Earth, which debuted in 2007. It seemed impossible to replace the iconic score that accompanied the attraction from 1994-2007, but Broughton managed to pull it off with his trademark playfulness.

And if, like me, you're a romantic, it's hard not to think about the long-since removed attraction, The Timekeeper. Located in Magic Kingdom's Tomorrowland, The Timekeeper was a Circle-Vision 360 presentation starring Robin Williams as the eponymous chronologist. The show featured a Broughton score that was every bit as playful as Ellen's Energy Adventure and as grandiose and magnificent as his Spaceship Earth.

And for you '90s kids, he also wrote this non-Disney tune that you might recall:

When the Walt Disney Company decided to update Epcot's long-running Illuminations show for the new millennium, the first person they asked to help write the score was the legendary Hans Zimmer. Zimmer was busy, however, and asked his friend Gavin Greenaway to take on the project in his stead. Thankfully for Disney fans, Greenaway said yes.

The resulting show, Illuminations: Reflections of Earth, has been playing at Epcot ever since, and Greenaway's music is a large part of the reason why.

I've suggested before that Epcot, as a park, is arguing a thesis – something along the lines of, “The better we are able to communicate with one another in the present, the better the world will be in the future.” Illuminations: Reflections of Earth is the perfect conclusion to that thesis, pointing out that the perseverance of humans, as well as our need to work together, is what keeps us moving forward toward the future.

And nowhere is that spelled more clearly than in the inspirational finale, which features the words, "We go on / to the joy and through the tears / We go on / to discover new frontiers / Moving on / with the current of the years / We go on moving forward, now as one.” The park is about us, and our collective journey forward in time, and Greenaway's score captures that feeling and amplifies it a thousand times.

Which, after all the walking, queueing, and eating, is exactly what you need to hear at the end of a long day at Epcot.

Close your eyes and click play on the video above.

Wasn't that fun? If that just made a bolt of lightning come shooting up your spine, you have George Wilkins to thank.

Not only is Wilkins responsible for the queue music for Space Mountain (as well as countless other attractions at Disney World and Disneyland), but he was also the visionary mind behind one of the most moving scores in Disney history – that of Horizons.

Horizons took guests on a trip to the future, and the accompaniment from Wilkins elevated an already stunning attraction into something transcendent. Other than the ride's beautiful theme music, perhaps its most arresting moment came in the transition into the “space” sequence, when french horns beckoned the ear skyward and the vehicle left the underwater Sea Castle colony for the Brava Centauri space station.

But if you're looking for something just a bit sillier, head over to Animal Kingdom: Wilkins also wrote the merry theme to “It's Tough to Be a Bug”.

By and large, these are spot on. If you were to round this out to a top 10 - I'd throw X Atencio in to the mix. While not a composer, per se, his lyrics in the Haunted Mansion and Pirates of the Caribbean are true classic staples of and Disney Park experience.

One composer who has given the 'sound' to a lot of Disney films in the last 20+ years is Alan Menken. His work on many of the beloved Disney films over the last two decades have filtered in to the parks in various attractions and parades. Anything you see of 'The Little Mermaid', 'Beauty And The Beast', 'Aladdin', 'Hunchback of Notre Dame', 'Pocahontas' (and more) in the parks is through his musical film scores.

And then, there's Bruce Healey - composer of the score to 'Fantasmic!' (in a few different versions) and the 'Fantillusion' parade. The themes for both projects lend themselves magically as mighty fanfares, but also as playful, exciting, hummable tunes.

There are many, many, magical musicians who've crafted the soundscape of Disney parks - and you're absolutely correct in stating that these musical decisions are made in such a way as to create emotional moments.

Thank you so much for putting this list together! It's nice to see these talented artists being recognized.

All are certainly deserving of recognition -- excellent additions, certainly. X Atencio is certainly worthy of an honorable mention; has work is nothing short of brilliant and has delighted guests for generations.

I appreciate you adding your favorites! There are so many talented people who come together to help shape the parks we know and love, and there really aren't enough thanks we can give the best ones. (You know, other than the exorbitant admission prices.)