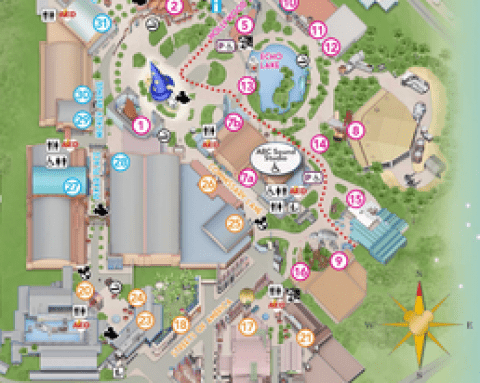 Could YOU find your way around these parks just using their maps?

Theme park maps have to be practical since their primary purpose is navigation. Even beyond just showing pathways, queue entrances, and rides, they have to show and label the locations of restrooms, first aid, guest services, and other necessary structural locations. Even if many park enthusiasts know their favorites like the back of their hand, most visitors actually need the map.

So maps are treasure troves of information for the average guest, sure. But they’re best when they’re beautiful. The location of the nearest restroom is important, but tons of visitors collect park maps for their artistic style. Like the parks themselves, they’re idealized and dreamy little miniatures of the wonders within. Maps are like billboards, highlighting key rides and recreating the park’s signature architecture.

The best park maps are a balanced blend of style and substance. And when one starts to overcome the other, bad things happen. Here, we’ve got a few examples of maps that either forfeited all practical usefulness to focus on artistic representation, or maps that left any artistic style behind in favor of bland realism. 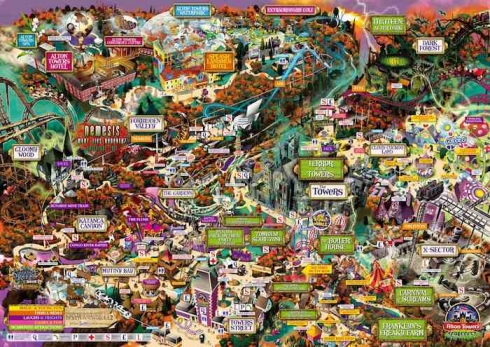 Problem: Alton Towers is one complex park. Having grown organically over the last century, the park has expanded and re-adjusted its layout many times as it’s changed, leaving it with a sprawling and sometimes chaotic layout that can defy intuition. The whole thing is made a lot worse by the 2011 park map (above). Finding your way from Point A to Point B may be practically impossible with the confusing and cartoony map. A fine collector’s item if you’re into the style, but not exactly practical. 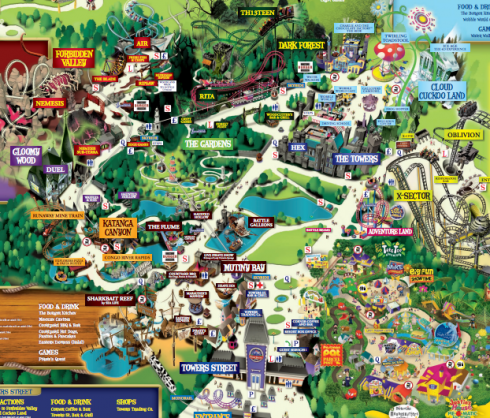 Solution: Alton Towers has toiled for years to find and stick to a map style that is legible and sensible while still showing off the park’s unique rides. 2011’s was a swing and a miss. For the life of us, we can’t figure out why they didn’t just stick with the very sensible style they’d used in the 2010 park map. An earlier 2006 edition was also incredibly successful at simplifying the park’s paths with a really unique stylish twist. The good news is that by the 2014 park map (above), they’d returned to their senses. While the park’s layout will always be convoluted, at least this year’s map legibly highlights main paths and more or less appropriately scaled.

Problem: A wave of visual disaster swept across US parks in the early 2000s during which maps became exaggerated, comic-book style representations of parks. Busch Gardens Tampa in Florida was one of the worst offenders, plunging its park map into an outrageous disaster of a situation that looks more like a child's seek-and-find book than a guide map. With rides and animals co-mingling along twisting and diverging paths, the park map might just induce nausea if you look too long. 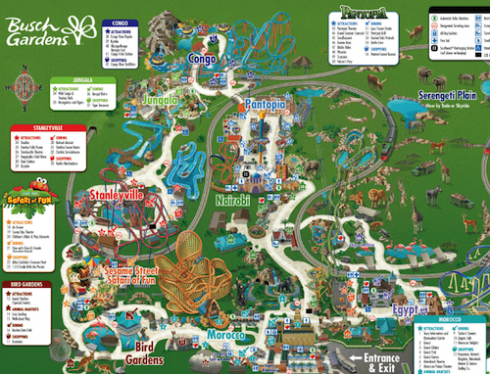 Solution: It seems pretty obvious that a convoluted park layout requires extraordinary clarity of the park map. Finally, Busch Gardens seems to have caught on. The 2014 map is to scale, and even highlights the park’s main path so as not to confuse guests who get lost along its African-themed trails.

Problem: To coincide with the release of MyMagic+ and the associated My Disney Experience smart phone app, Disney commissioned new park maps that would be smart phone and tablet friendly. The intention was that the maps – to scale and GPS-designed – would be able to show guests live position in the parks through the app. And, part of a seamless, resort-wide map, guests could zoom into any park or even land, then trace that park’s connection to nearby hotels, waterways, transportation, and other parks as one giant, huge, 40,000 acre, accurate map.

It works for the app, but Disney made the unusual decision to switch the paper, in-park maps to the new GPS style, too. The results have been met with groans from fans, and it’s sort of easy to see why. Sure, the maps are now hyper-scaled and great at the “practical” element of showing paths and services. But where’s the artistry? Oriented north (which makes sense as part of that giant resort-wide map, but causes lots of confused map shuffling from guests trying to figure out where they are on paper), the entrance is in the upper-right corner. The map itself is also tiny, with the labels and legend taking up more than twice as much room as the map itself. Who would hang that on their wall as a souvenir? 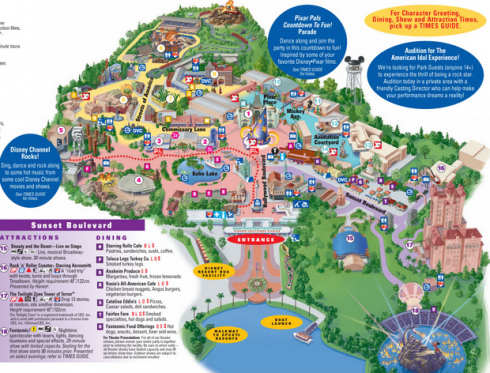 Solution: This one is not solved. The GPS map above is the current park map. The most viable solution is to simply turn back the clock… What exactly was wrong with the trusty, artistic maps that had graced the park for many years? We’re not afraid of change, but this might be a case of “if it ain’t broke, don’t fix it.” The new, hyper-accurate map does make sense for live-tracking locations on electronic devices, but the old map is much more user-friendly and a lot more likely to be saved and hung up by park fans. Ah well.

Hollywood Studios map likely has not been updated as it is soon to be overhauled.