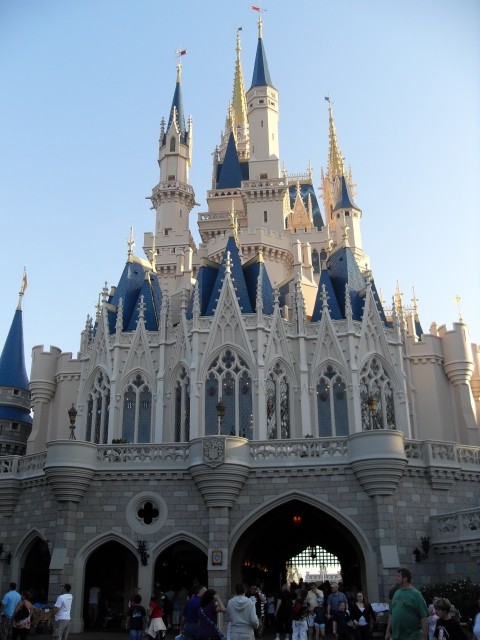 The Walt Disney World Resort is well-known for its endless stream of tweaks and modifications. From FastPass Plus to the reconfiguration of major walkways through the Magic Kingdom, even frequent visitors are reeling from all the recent changes. Those who have not visited in a decade or two might have trouble recognizing the parks of today. Yet 14 original, opening day attractions still remain at the Magic Kingdom.

Last week, we brought you those that have changed little since October 1, 1971. This week, we’ll look at the 7 that have been extensively rehabbed, yet retain much of their original spirit. 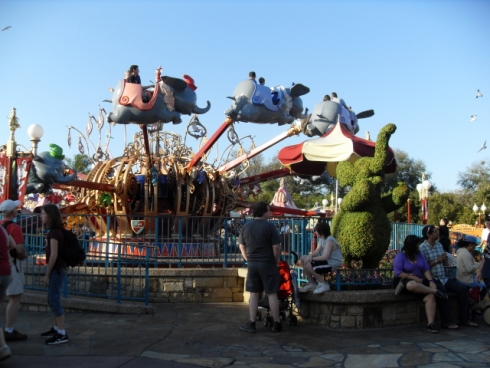 DumboDumbo the Flying Elephant was so popular that Disney built a second one at the Magic Kingdom!

Based on the Disneyland attraction that debuted shortly after that park opened, Dumbo the Flying Elephant has been wildly popular since the Magic Kingdom opened its doors. It originally lacked the elephants’ hats, the spinning disco ball and the Timothy Mouse figure, but those were soon added. The ride did not significantly change until 1993, when six additional elephants were added, the ride mechanism was redesigned and some cosmetic upgrades were made. In 1997, the queue was covered and topiaries were added.

The most dramatic changes did not come until 2012, when Dumbo moved from its Fantasyland location into the massive expansion known as New Fantasyland. The original ride was reconstructed in the Storybook Circus section and a second copy was built alongside it. The two rides spin in opposite directions, creating a graceful movement. They also share a highly interactive queue. When entering the Standby line, you will receive a pager that looks like a circus ticket. You are then free to wait in the air-conditioned circus tent packed with play equipment for children of all ages. Parents can take a seat on a comfortable bench, and the pager will let you know when it’s time to ride. Those who remember the endlessly long lines that this ride always had are likely to appreciate the overhaul! 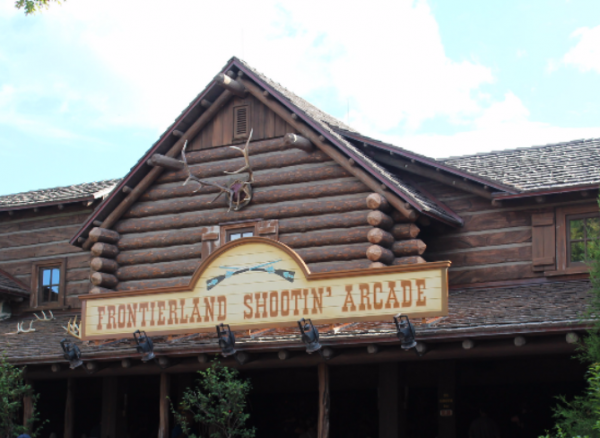 Set at Boot Hill in the mid-19th century, the Frontierland Shootin’ Arcade allows visitors to shoot at nearly 100 targets. The authentic .54 caliber rifles were originally retrofitted to shoot lead pellets. However, the pellets caused chips and dings to the targets and backdrops, causing the attraction to require nightly maintenance. In addition, changing social norms raised increasing concerns about safety.

In 1982, the attraction was refitted to use infrared light beams rather than pellets. Prices have, of course, steadily increased, but otherwise the attraction remains much the same as it was in 1982. 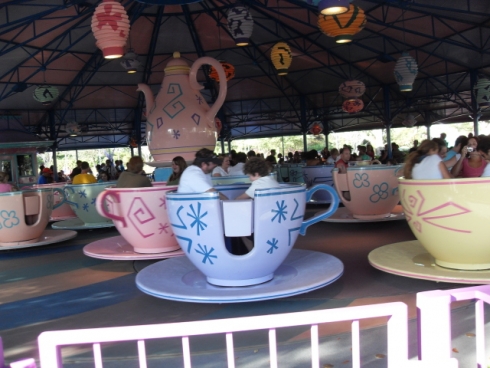 Like its Disneyland counterpart, which opened with that park in 1955, the Mad Tea Party is based on the Unbirthday scene in Disney’s Alice in Wonderland. The Magic Kingdom’s version was originally a near-exact copy of the Disneyland ride, including the lack of a roof. Due to Central Florida’s extreme weather conditions, a roof was added in 1974. The signature teapot was also added at that time.

The Mad Tea Party was upgraded in 1992 with a new soundtrack, bright new colors and the addition of Japanese lanterns. In 2010, a minor rehab replaced the roof and freshened up the attraction. Interestingly, the Disneyland original is now the only Mad Tea Party in the world that lacks an overhead cover. 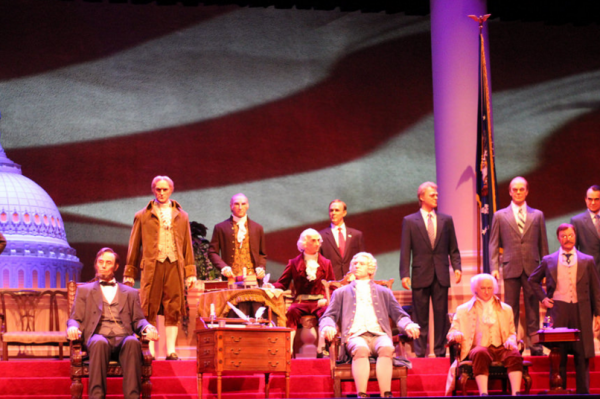 The Hall of Presidents was created as a follow-up to Disneyland’s Great Moments With Mr. Lincoln, itself a stunning technological marvel of its day. Walt had long expressed interest in building an attraction called One Nation Under God, which would feature audio-animatronic figures of all the U.S. presidents. At the time, however, the technology was not yet advanced enough to make his dream a reality. Instead, Walt decided to focus solely on Abraham Lincoln. Great Moments With Mr. Lincoln shocked the world in its debut at the 1964 World’s Fair, as the animatronic Lincoln stood up to deliver his speech. An expanded version of that show, featuring an even more sophisticated audio-animatronic, was installed at Disneyland in 1965.

Walt Disney passed away in 1966, while the Florida Project was under construction. As technology continued to evolve, the Imagineers decided to pay tribute to Walt by finally fulfilling his concept for One Nation Under God. The name changed to the Hall of Presidents by 1971, when the Magic Kingdom opened. The original show focused heavily on the conflicts, struggles and constant improvements necessary to create a great nation. After the film portion of the presentation, the screen rose to reveal all (then) 36 presidents standing and sitting around the stage. A roll call presented each in turn, and then Abraham Lincoln rose to give a speech similar to that of Great Moments With Mr. Lincoln.

Other than the addition of new presidents as they took office, the Hall of Presidents did not significantly change until 1993, when the entire show was significantly overhauled. A new script, voiced by Maya Angelou, focused on issues of slavery, ethics and civil rights. In addition, Bill Clinton became the first sitting president to speak during the show. Clinton recorded his own voice, a tradition that has continued ever since. During the 2001 update that added George W. Bush, J.D. Hall replaced Maya Angelou as the narrator.

Another massive overhaul occurred during the 2009 rehab that added Barack Obama. The entire audio and visual systems were completely redone, and the script rewritten to focus on the theme of populist politics and what makes a president a strong leader. Morgan Freeman recorded the all-new narration, but arguably the most impressive part of the redo is the upgraded audio-animatronics. George Washington now has a speaking role, and both he and Obama show previously unprecedented levels of animatronic realism. The new show is a dramatic tribute to Walt’s original idea.