The rides and attractions at Disney's theme parks and resorts are pretty extraordinary in themselves. But if you look beyond them, you can find some even more amazing and unusual things to do. If you feel that you've done everything that the parks have to offer, you may want to look beyond the standard line-up of rides and shows and explore some of the more unique tours and experiences that are available. Here are 5 suggestions for magical experiences to add to your personal bucket list... 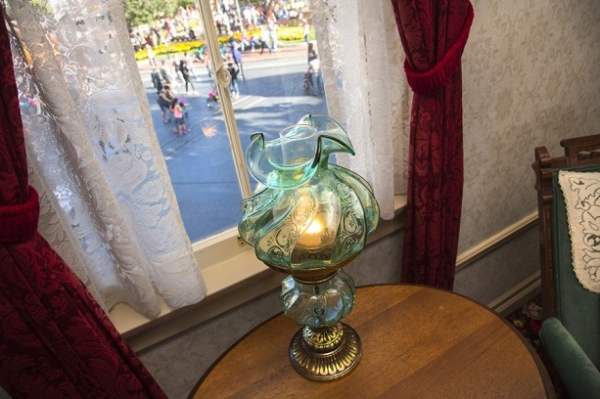 It seems appropriate to start where it all began - Disneyland - with a visit to the very apartment that Walt Disney stayed in while building the park. The construction schedule for Disneyland was painfully short - the park famously opened just one year and one day after work began. Walt was heavily involved in almost every aspect of the project, and that meant spending a lot of time at the park. Often, it even meant sleeping there. So Walt had an apartment constructed above the Fire Department building on Main Street, USA.

The tiny apartment was equipped with a bathroom (complete with shower) and a small kitchen, and was "themed" to fit in with the firehouse downstrairs. It was decorated by Emil Kuri, who was also responsible for decorating the rest of Main Street, USA. Walt's wife, Lillian, was able to relax on a small patio, while Walt worked away at a small wooden desk. Guess what? The apartment is still there. And you can visit it! Access to the apartment is limited to guests on the "Walk in Walt's Disneyland Footsteps" tour, which launched back in 2012. Focusing on Walt's life and work on Disneyland, it includes a look inside the apartment, a glance at the lobby of the exclusive Club 33 and a private lunch on Main Street, USA.

You can't take photos in the apartment (there's a sneaky glimpse above), but a group photo is taken, so you'll have a memento of your visit. You can pre-book a slot by calling 714-781-TOUR (8687) - it'll set you back $109 per person, or $87.20 per person for Premium or Deluxe Annual Passholders and Disney Vacation Club members. You'll have to pay for admission to Disneyland, too.

2. Go underground at the Magic Kingdom

Many Disney fans will know that the Magic Kingdom's rides and attractions aren't actually situated at ground level. Instead, an immense network of utility corridors ("utilidors") was constructed before the park opened, and then covered over with earth that was excavated from the Seven Seas Lagoon. The theme park itself sits on top of them. 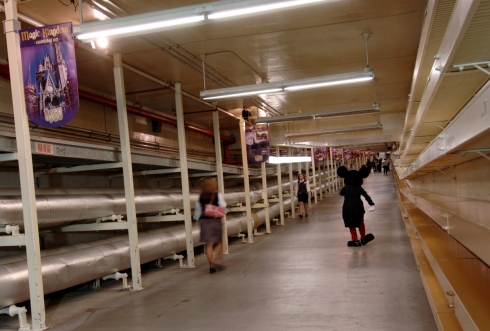 Mickey himself wanders the utilidors.Source

The utilidors serve a number of backstage functions, and were installed so that guests don't have to see these being performed, thus breaking the "magic". This includes waste removal using an Automated Vacuum Collection system, computer systems, deliveries, kitchens for the park's restaurants and locker rooms for Cast Members. Until 2005, the costuming department - with over 1.2 million outfits - was also housed in this underground lair. 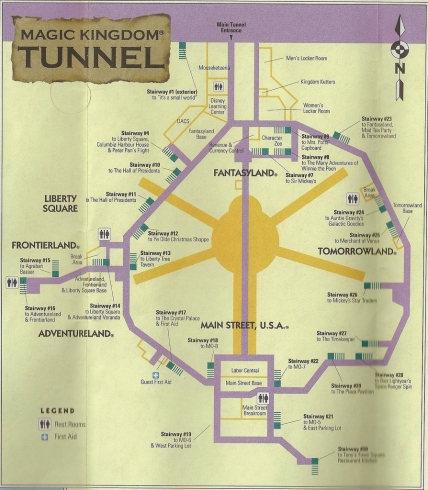 The utilidors are generally off-limits to guests, and most visitors to the Magic Kingdom don't even know that they are there. But it ispossible to explore them as part of an organised tour. The Keys to the Kingdom tour, which includes visits to several other backstage areas, features a trip down into the utilidors. Want to check out what's underneath the Magic Kingdom? You'll need to call (407) WDW-TOUR to make a reservation. Expect to pay nearly $80 per person, with discounts for Annual Passholders.

OK, so you've now been underground at Walt Disney World. Now, why not soar above the resort? It's possible to take an aerial tour over Walt Disney World, as well as many other Orlando-area attractions. One of the leading providers is Mauiva Air Tours, which offers trips that take in:

If you want to, you can even try your hand at being a pilot, taking controls of the airplane. Those purchasing the Captain's Package will also receive a certificate showing the time they've logged towards becoming a pilot. The experience is available to those aged 5 and up.

I love it all, the magic, food, rides, shops, exhibits, it is fantastic. I used a scooter car which was pricey but I needed it. I will return!

I love Disney World, in many ways more than Disneyland,but honestly why is Disneyland becoming so overlooked. nearly all sites and blogs dedicated to the world of the Mouse focus on Disney World and neglect its older brother. For those of us who cant make it to Florida every year and turn to California simply because its closer would love to find out more on the original.