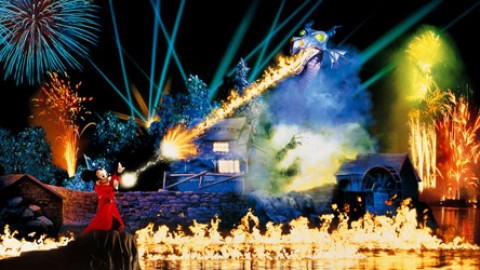 Due to a recent addition at Animal Kingdom, every theme park at Walt Disney World now enjoys a nighttime theatrical show. As everyone who has ever visited the parks realizes, there can be tremendous aggravation in trying to attend one of these affairs. Since proper time management is the key to any theme park visit, nobody wants to waste precious hours standing in line (or wasting a FastPass+ selection) for a nightly event that proves to be overly crowded and less than entertaining.

Have no fears. Theme Park Tourist is here to identify how prioritize the various evening events at Walt Disney World!

The placement of Illuminations at the bottom of the list reinforces the thought process that all shows at Walt Disney World possess a great deal of merit. EPCOT happens to be my favorite Disney theme park. I greatly enjoy the combination of world class restaurants at one end of the park coinciding with several exciting yet somehow educational rides at the front of the park. Plus, there is booze everywhere onsite, which is never a bad thing for the average adult tourist.

Still, Illuminations does not do a lot for me because of the aggravation involved. In order to acquire decent seats, a visitor must either burn a FastPass+ selection, a top tier one no less, or stand in line at the designated area roughly an hour prior to the start of show. If a person’s choices are reduced to Soarin’, Test Track, Living with the Land or Illuminations, even Living with the Land looks better on paper.

With the FastPass+ option removed from consideration, Illuminations becomes a 75 minute affair including the time spent waiting for the event to begin. Since park visitors are not in charge of crowd control, there is also no way to guarantee that the person standing in front of them will not put either their child or their girlfriend (no, really, I have seen this) on their shoulders at some point during the show. For all of that aggravation, Illuminations had better be worth the trouble. It simply isn’t.

Illuminations is a thematic fireworks display that features an in-water globe. Said globe is used to project geographic imagery into the sky. Via the clever use of holographic photography, people can watch horses frolic through African countries, trains cross America’s frontier land, and an Olympic torch passed through multiple locations. It’s nice. I mean that.

My problem with Illuminations is the opportunity cost. As other people head to the (limited) area of the park providing a great view of the Illuminations globe, lines for actual rides dwindle to nothing. A clever park patron could ride all of the major rides at EPCOT – remember that there are only half a dozen that ever have a wait of more than a few minutes – as the herd heads toward the fireworks. Better yet, someone could ride Soarin’ or Test Track repeatedly during that hour when people are gathering for the show. During peak visitor periods, this opportunity only presents itself during Illuminations. Even the rope drop sprint has become less effective now that FastPass+ is in place. If you have never watched Illuminations before and want to do so, you would do just as well to google the video as to see it live. Your view of the globe is likely to be better, and there is no fear of other park visitors interrupting your enjoyment.

This concert is the newest nighttime event at Walt Disney World. It is a musical celebration of the 20th anniversary of The Lion King, Disney’s most popular movie release of all-time until very recently when it was overtaken by Frozen. This Animal Kingdom event is different from the others on the list. It is currently a limited time production, meaning that if you do not plan to visit Animal Kingdom anytime soon, you are never going to get to watch it. More importantly, it is also the only event listed that is not free.

Harambe Nights carries a stiff fee of $120 per person for general admission or $135 per person for “premium seating”. The good news is that it is effectively a buffet with alcohol purchase included. So, if you are a hungry lush with a big appetite and an accommodating liver, the price tag suddenly looks somewhat less objectionable.

As for the selling point of Harambe Nights, I can describe that in simple terms. The musical version of The Lion King is a Broadway legend. Even today, tickets sell out in advance and the cheapest ones sell for $150 per person. Keeping that information in mind, the idea of watching a variation of that performance at a Disney theme park with food included suddenly seems like a decent deal. The other good news is that since the performance is hosted in a smaller indoor area with appropriate seating, crowd control is better than any of the other three events. If the sticker shock does not immediately discourage you from enjoying the event, Harambe Nights is a solid option for most families. It is a must-see gala affair for fans of The Lion King.

I completely agree with the rankings. Illuminations does nothing for me, I've never seen harambe nights BUT anything is better than illuminations, wishes is spectacular but the crowd gets really crazy I've actually had people try to stand on me (I wish this was an exaggeration), Fantasmic is pretty incredible with plenty of seating for everyone and no matter how many times I've seen it I always feel the magic!

the fireworks over the castle win for me all the time, although my husband was to sick and wounds from my last fall accident kept us from staying past the parade this year. better luck next year. Then fantasmic is next , which we did see the early showing this year. I do not like the show at Epcot. I haven't seen it in years so maybe one day we will hope that its changed and will be worth our staying. As far as the animal kingdom is concerned, I'd never pay 120 dollars for admittance to that park at nite. I don't see anything exciting enough in the park for me now and even when I was able to enjoy the yeti rollercoaster and the dinosaur ride, the park only got our business for half a day. The park is too confusing and U seem to go in circles. The signs seem clear enough but don't make a wrong turn on your way from the sign.I do still enjoy the safari ride and the Lion King show. That's it.

I agree 100% with everything you said. We finally made it a point to sit through illuminations (we usually just see it on our way out) this past trip in May and I still don't care for it. I watch wishes EVERYDAY that we are in the magic kingdom and will sit stand or crawl to be able to see it. I always get goose bumps as soon as the music starts and I always cry just a bit ( yes, I'm that moved by it) animal kingdom is my least favorite park . It's to hard to get around, to confusing, too muck backtracking for your fast passes. It also feels hitter there!!!! I don't care for the. Food either. There are a few rides but nothing to keep me all day. I'm with you, I would never pay that kind of money for a show when I already paid to get in the park. Overpriced even though it includes dinner and alcohol . I don't eat that much food and wins!!! Magic Kingdom is and always will be the best in my opinion!!!!

What a fantastic and well written review! Enjoyed the read very much indeed.

The Epcot show wins for me and has always been 1st place and I think I've seen it 20 times now. It's the overall production that is perhaps overlooked in your review. The timing of effects, the use of all (OK, most!) of the Wold Showcase buildings with their lights and strobes, the fire pit lanterns, right down to the musical score. ("Promise" - the walk out song, was even played at my wedding whilst signing the register!)

I can see your point completely about getting the right spot to observe. Also what really annoys me is all the people around holding up their cameras to film it - I feel like shouting "You'll never watch what you've just recorded ever again and yet you've just watched the whole show through your camera instead of the 3D version that's just happened right in front of your eyes!" Plus they can always watch it on YouTube anyway (and it'll probably be much better!) I just wish they could ban filming at all of the shows you mention! lol!