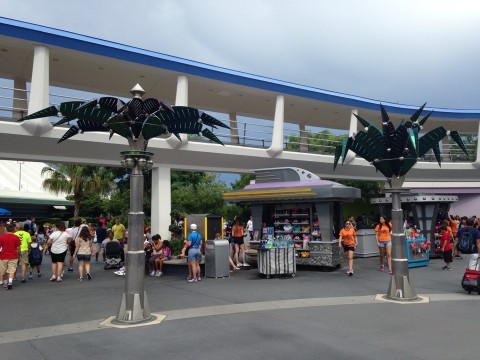 Tomorrowland is Magic Kingdom’s futuristic community of tomorrow. This bustling metropolis is heavily populated by intergalactic beings, but thankfully most seem to be of the friendly and whimsical variety. The real charm of Tomorrowland is in the details. Check out these fun little finds that add to the space-age flair in this area. 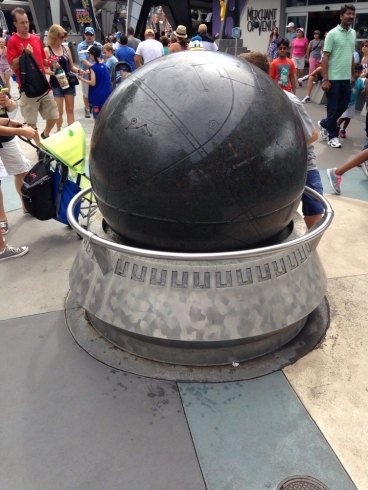 Most Tomorrowland visitors have noticed the giant black kugel ball near Merchant of Venus. What they probably don’t know is exactly what it is or how it works. A kugel ball is a large granite ball that’s supported by a thin layer of water. The granite must be a perfect sphere, placed on a base that has the exact same curvature as the ball. With this perfect configuration, the magic of physics takes over and makes it possible for even a child to get a ball that weighs several tons to start moving.

The kugel ball in Tomorrowland reportedly weighs about 6 tons, or over 13,227 pounds. If you’re having trouble putting that into perspective, African elephants weight between 8,800 and 15,400 pounds. So you can tell your kids when they’re able to move the kugel ball, that they’re pushing around as much weight as an elephant.

2. The murals in Mickey’s Star Traders 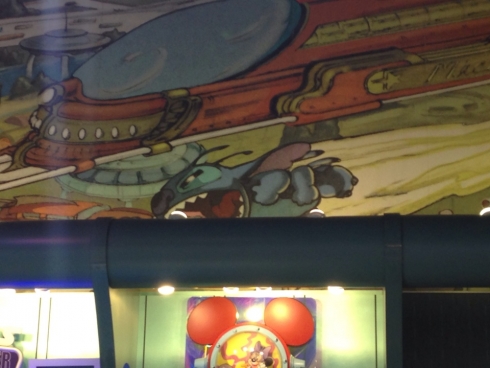 If you’re a fan of hidden Mickeys, you’ll love Mickey’s Star Traders. Turn your gaze upward to the murals that surround the top half of the room and you’ll find several opportunities to hunt Mickeys down. You’ll find Mickeys in the headlights of a train, satellite dishes, freeway loops, and several architectural elements of the futuristic buildings.

These murals also include another famous character – Stitch! Look to the bottom corner beneath the train and you’ll see this blue furry friend racing alongside.

3. Sonny Eclipse and the Astro Organ 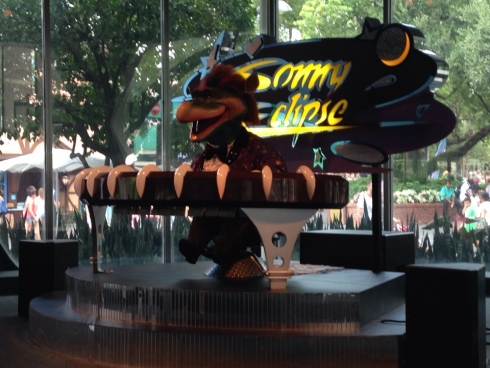 If you don’t dine in Cosmic Ray’s Starlight Café, you may miss out on the famous intergalactic performer, Sonny Eclipse. This audio-animatronic character performs an extensive set that lasts approximately 30 minutes before looping back to the beginning. This gives you the opportunity to see a lengthy show filled with unique highlights while you eat, rather than a short looping piece which could get annoying (think Fast Food Boulevard in Springfield at Universal Studios Florida.)

Pay close attention to the music and conversation from Sonny and you’ll catch lots of clever quips. This celebrity hails from Yew Nork on the planet Zork. His vocals are backed up by the charming but invisible Space Angels. If you have a chance to visit Tokyo Disneyland, you can say hello to Sonny’s cousin, Officer Zzzzyxxx at Star Tours. 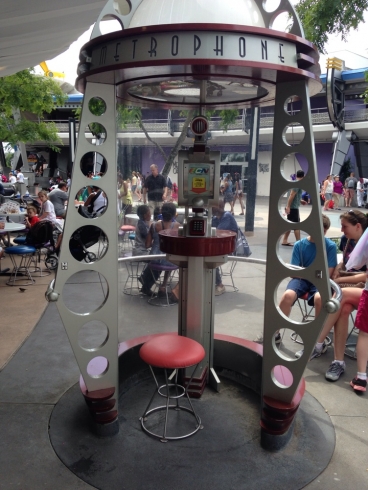 Pay phones may be out of vogue in most locations, but the technology is still going strong in Tomorrowland, where visitors can use the Metrophone to make intergalactic phone calls. This futuristic phone booth is widely underutilized. It sits outside the Lunching Pad, beneath the load area for the Tomorrowland Transit Authority.

Step inside and pick up the phone for toll free calls anywhere in the galaxy. Pressing different buttons on the keypad will connect you to various messages, filled with quirky quips. Drop in and make a few calls to join in the fun.

In December of 2013, we went on "stitch's great escape" not realizing how utterly scared our 4y/o would be. Once we got off the attraction, you are exited through Micky's star trader store. As we entered the first CM we encountered saw immediately how upset our daughter was- she was even hyperventilating. The CM approached us, assessed the situation and immediately asked our daughter if she could help her with some very important disney business- she asked our daughter to help her find the hidden mickeys in the mural. Almost immediately my dd calmed down and took her "job" very seriously, and she began hunting for the mickeys and she found them all (with a little guided assistance from the kind CM) she gave her a paper "official" award and a pin. The award and pin said she was an official hidden Mickey finding expert. She was so psyched and a few CM's made a huge fuss over her that her terrifying experience was totally overshadowed by the awesomeness of the hidden Mickey award. As a mother I cried inside along with her on the ride, then I cried tears of relief and joy watching her interact with the CM. Will we do stitch's great escape again...no. But we will remember how proud she was of being an official hidden Mickey Finder. Not sure if it is a "real" thing- but it was to her.