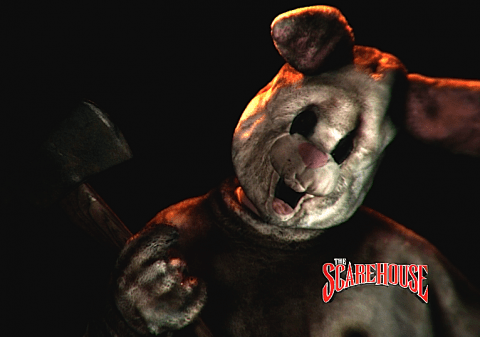 Pittsburgh, Pennsylvania’s ScareHouse is easily one of the giants in the haunted house field; not only has it consistently ranked as one of the scariest haunts by a number of different publications for the past several years, its reputation has also been bolstered by a now-famous visit from film director Guillermo del Toro, who left stating that he could live there.

Part of the secret behind ScareHouse’s success lies with Dr. Margee Kerr, a sociology professor at the University of Pittsburgh, who was brought on as a consultant to help develop, implement, and analyze data on customers and employees to help the haunted house be “scientifically scary.” 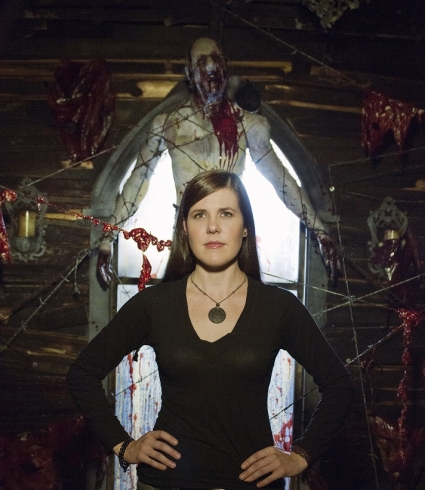 As part of that scientific process, the idea developed to do a special extra attraction called the Basement, a separately-ticketed haunt that plunges just one or two individuals into an “R-rated” experience in which the scare actors can – and will – touch and restrain guests.

(It’s so intense, would-be victims have to be at least 18 years of age and sign a special wavier before they can enter. They can also yell “Bunny!” if they just can’t handle it, and they’ll be escorted out of the attraction.)

And as if that weren’t enough, ScareHouse has recently begun doing a series of special, one-off “ultimate scare” experiences set in the Basement, with the most recent being this Saturday’s “Hooded in the Basement.” Available for one night only, this off-season event has just one individual enter the haunt by himself, hooded and in total darkness.

Where did the idea for such outlandishly scary experiences come from? And does it point to the future of where the entire haunted house industry will be heading in the next several years? And, most importantly, why will you be too scared to be Hooded in the Basement yourself?

To find out, we picked Dr. Kerr’s brains, Hannibal-style. All the answers to our questions, plus a whole lot more insidious secrets, were in there…

1. The Basement was designed to be scarier than anything else out there

What was the genesis of the Basement? Where did the idea come from, and was there much resistance to it at first?

The Basement began as a fun experiment in 2012 with just one actor. I had been analyzing the customer data since 2008 and noticed a trend of customers wanting more interaction and engagement inside the haunt. We noticed that there was a subset of the population who wanted a more extreme experience.

In 2012, we created “ScareHouse Secrets,” which involved inviting random customers from line into the basement to interact with one of our actors who was experienced in improvisation and immersive theater (Ayne Terceira, who just recently had a great success with her own immersive theater piece, “Her Things”).

“ScareHouse Secrets” was free and lasted only about five minutes, but the result was astounding; people loved it (well, those who agreed to go down – again, these experiences are not for everyone). So the next year we decided to create an entirely new attraction that offers the more intense, interactive, and engaging experience.

Why is the Basement a separately-ticketed haunt?

Because the Basement does involve interaction, touching, and R-rated material. Individuals have to be 18 and sign a waiver and fully understand what they are buying a ticket for. The Basement is not a haunted house; it’s a fully immersive experience with one-on-one interactions, so it was necessary to make it a different ticket.

Could you elaborate on the "R-rated" nature of the experience?

The Basement cast does use foul language (though we do have a list of banned words). It also contains scenes that are extremely intense and, yes, scary! It’s like being in your own R-rated horror movie.

ScareHouse and the Basement do have boundaries, though – we will never have scenes (in the Basement or the main haunts) that depict helpless female victims or violence against women.

Do these extreme haunts provide certain opportunities that normal attractions don't allow for? I noticed that “water” and “strong scents” are listed on the Basement's description...

We utilize a lot of the same tips and tricks from upstairs, although I think we can push the scents a little further in the Basement and go for some of the more disgusting ones, like boars’ urine.