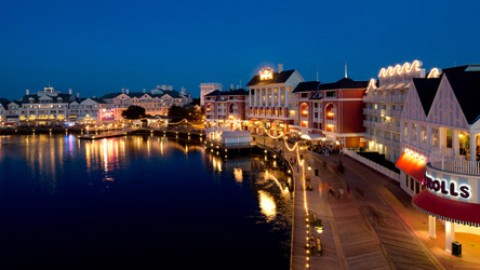 The Disney Vacation Club has become immensely popular over the last few years, and is a huge money-spinner for the company. No wonder Disney is investing so heavily in new DVC properties at present.

Members of the club must buy a real estate interest in a Disney Vacation Club Resort, and thereafter pay annual dues. This will earn them DVC "points", which can be spent on vacations at any of the DVC resorts. Here, we've picked out 6 of the very best.

The prices reflect the high profile status. The absolute cheapest nightly stay at one of the best half dozen DVC properties is $327. The average night would cost $415 among the locations, and that cost is for the most basic rooms possible. Rates double for villas and concierge floor placement; they triple for deluxe suites. Nobody in their right mind would be paying such nightly rates unless they have at least partial ownership of a major sports franchise. These are not costs that the common vacationer can afford.

The magic of DVC is that a person who purchases the appropriate level of points can annually schedule a trip to these otherworldly resorts. For a one time lump sum plus modest annual maintenance fees, any of 12 (soon to be 13) properties may be visited “free” of charge. Disney Vacation Club has become one of the most trusted and popular time share concepts in the world. Read the descriptions below to learn which ones are the best of the best.

Aulani, a Disney Resort & SpaCheck out the view at Aulani. Image © Disney

The other five properties listed below are all located in Orlando. The sixth entry is an exception because Aulani is located in Hawaii. This site is devoted to theme park discussions as a rule, but come on. Everyone reading this that isn’t in Hawaii right now wishes that they were.

The Aulani resort is a unique property for Disney.  The Hawaiian hotel is a beachfront location featuring a panoramic view of scenic landscapes indigenous to the islands. Unlike every other DVC residence, there are no bad views at Aulani. Every moment of time spent onsite is an exercise in exotic vacation bliss. Plus, the hotel is child-friendly for families yet also designed for couples seeking a romantic getaway. Such a combination is difficult to achieve in the hands of lesser architects. Disney’s Imagineers are more than up to the task, though.

A guest at Aulani will discover many more activities than people staying at the other primary beach properties, Vero Beach and Hilton Head. There is a lazy river pool that rivals the ones at Disney’s actual water parks, Typhoon Lagoon and Blizzard Beach. History buffs will discover that they are only a short drive away from the Pearl Harbor tour. And the crown jewel of an Aulani vacation is a fireside luau complete with hula dancers and a master storyteller. Paradise never felt so much like home. If Disney ever created a theme park in Hawaii, Aulani would immediately jump to number one on the list of finest DVC properties. Even without amusement park rides, it is still the escapist fantasy we all dream about while struggling through a long week at work. 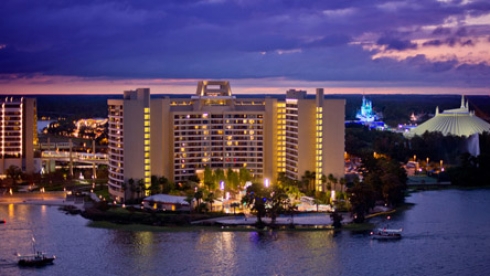 The twin of Disney’s iconic Contemporary Resort, Bay Lake Towers was built specifically for Disney Vacation Club members. It is also the newest hotel at Walt Disney World. By doubling down on the Contemporary Resort concept, Disney designers accomplished a pair of impressive feats. They have provided DVC members with the ambience of one of Disney’s most storied hotels while adding the modern conveniences of a newer facility.

The real beauty of Bay Lake Towers is its location, though. This is the only Disney hotel where someone can walk a reasonable distance to the Magic Kingdom. There is no price tag that can be placed on such easy park access. Everyone has their favorite theme parks, of course, but the reality is that Walt Disney World’s Magic Kingdom is the alpha of the industry. 18.6 million customers visited the park in 2013. Only a select few of them did so by walking to the park. The rest were left to roll the dice on inconsistent park transportation. We all (not so) secretly enjoy feeling superior to the other tourists, especially when it comes to hotel location. For the sake of convenience alone, Bay Lake Towers is a spectacular DVC property. 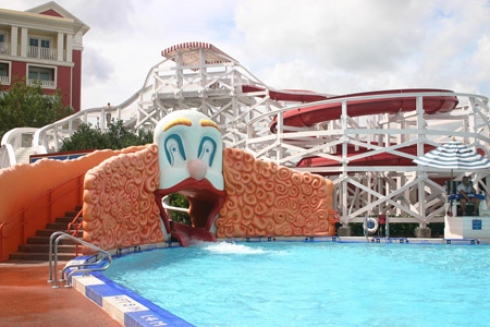 This property is a throwback to the pre-World War II era of hotel design. In fact, if you have ever played Bioshock Infinite, the concept is very similar in style and tone. Boardwalk Villas is an atmospheric trip down memory lane, a celebration of a hotel concept lost in time. It even has an old timey dance hall and a strip of modern stores designed as throwbacks to the era of our great-grandparents. You have never eaten at an ESPN Club until you have eaten at one retrofitted to the days of Franklin Delano Roosevelt.

The other selling point of Boardwalk Villas is locality.  This particular property is a (somewhat long) walk away from both EPCOT and Hollywood Studios, providing the guest tons of options about how to spend their free time. The only real negative about Boardwalk Villas is its legendary evil clown pool. Look at the picture above and stare into the face of evil. Nobody has any idea what Disney was thinking with this particular aesthetic choice.

I would put Aulani at the top of of this list instead of the bottom, and my #2 and #3 choices didn't even make the list. As a DVC member for 22 years, I can say with confidence that my favorite resort is Aulani with Old Key West and Animal Kingdom Villas, Kidani Village close behind. The original DVC is truly the best at Walt Disney World with all it's space and the "home away from home" feel. Kidani is still more of a hotel, but the presence of the animals right outside your door makes it beyond special. I would not have rated any of your top 6 other than Aulani.

There is only one Bay Lake Tower. Adding an "s" is a surprisingly rookie mistake.

Aulani is a very cool place. It's not Disneyfied. It's just a top world class resort. The beaches of Waikiki are ugly dirty and crowded. I hate Honolulu. Of course you need a car in any part of Hawaii. Otherwise you're stuck paying top dollar for food and tours around whichever Island you're visiting. Imagine paying $1000 for a plane ticket and then never seeing anything other than your resort. If you do that I reflects on you not the resort.

DVC Aulani is a beautiful resort but a major waste of a very large airfare. Unless you rent a car, you cannot get to Pearl Harbor or anywhere else in Honolulu or on Oahu. The location is isolated and on the far side of both Pearl Harbor and the airport from the city. It can take up to an hour or even more to get to downtown Honolulu or Waikiki from Aulani. The DVC resort, and the other three resorts with it at Ko'olina are artificial paradises created on the desert side of Oahu, just past the oil production fields on the far outskirts of Honolulu. If you want to spend a vacation in a Disneyfied version of Hawaii, you will enjoy the trip. If you want to see Waikiki, Diamond Head, and all that Oahu offers, plan on many long commutes in heavy traffic to get to where the Hawaiian sites are.

It is not completely true that you must rent a car, but that being said, it IS the easiest way to see the attractions you mentioned. There are shuttles that run also at a cost, and there are tours to those places from the resort via the shuttles.