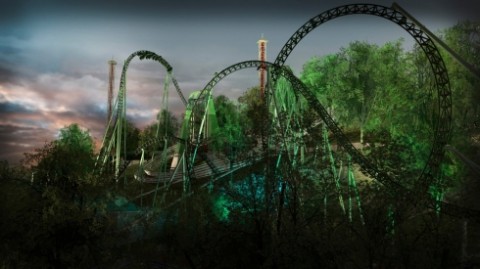 A quiet, pay-per-ride amusement park located in the city of Gothenburg, Sweden, holds a fantastic, exhilarating, and world-class secret.

For among the traditional roller coasters, Ferris wheel, drop towers, swings and log flume, there winds a green track - set deep into the hillside, snaking its way through trees, breaching the skyline occasionally, and excitably leaping over and diving under other attractions. At night, this takes on a whole new character - turning into a screaming rush of bright green and white lights, appearing and disappearing in the darkness.

This is none other than Helix.

The price-tag on Helix was pretty hefty - coming in at a total cost of 200 million Swedish Krona (that’s about $30 million). Needless to say, Helix is the biggest investment in the history of Liseberg, and the park certainly put a lot of time and effort into it; with concepts being thrown around as early as 2009, and construction beginning in 2013. Helix opened to the public on April 26, 2014, claiming the title of “Europe’s first multi-launch roller coaster” (unless you count Revolution at Blackpool), with its two mid-circuit LSM launches.

"You're only the longest or tallest or fastest for a short while," said Liseberg CEO and President Andreas Andersen. "What we wanted to build was a new classic."

And that they did.

2014 is not a huge year for roller coasters in Europe - the only other major coaster to make its debut is Flug der Damonen - a B&M WingRider in Heide Park, Germany, which opened on March 29.

Before the name was quietly announced, Helix was known as... Projekt Helix. This does make the ride’s official name seem quite lazy; as if the public and staff were referring to it as “Helix” for short, and the name just kind of stuck. Who knows...it could have been Helix all along.

On the surface, the name “Helix” seems pretty uninspiring. After all, it is the name of a roller coaster element. Just like “Corkscrew”. But Helix does tie in with its theme - a 3-Dimensional being amidst this digital world. More on that later. 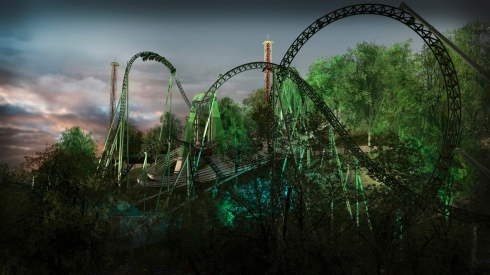 Helix is not particularly well-known, and not just on a global scale either. Even here in Europe; Helix has silently opened - a major multi-million dollar roller coaster, avoiding the attention of many a devoted coaster enthusiast. Why is this? It can be narrowed down to a few reasons:

In all honesty, Helix’s theming is not entirely clear, and the overall concept of the ride feels a little lost. Even now, after learning a lot about the ride, it is pretty tricky to grasp as a theme park enthusiast - let alone to a regular park guest. With “the roller coaster of the future” splurged all over its brochures, Helix definitely has a technological feel to it. In fact, everything about the ride has a digital, techie feel, from the music, to the bag storage in the station, to the social media-themed merchandise at the ride exit - everything about Helix is colored green, silver, or black, to fit with the theming. But, that’s as pretty much as far into a theme as Helix goes.

In a nutshell, Helix’s concept appears to be that we all exist in a digital age, yet as wonderful as that is, it wants to remind its riders that the best experiences are first-hand - and the adrenaline, freedom and excitement you feel of being on a roller coaster are unmatched. Liseberg wants Helix to be a symbol of this concept. Helix is, essentially, “the next level” as they claim - one up on the digital and intangible world of today, one better, and one worth more experiencing.

It’s definitely safe to say Helix has a concept; an overall idea, instead of a particular storyline. But even with a basic (and interesting) concept, it is well-themed - considering it is located in a pay-per-ride amusement park, and not Disneyland.

Before boarding the coaster, as a guest, you will inevitably wander through Helix’s queue line. Green and blue spotlights light up concrete walls and metal fences. The floor, covered in rocks, adds to the simplicity and rawness of the queuing experience. A lot of the queue is underneath the station itself, with a concrete ceiling and pillars forming the entire structure.

Three neon green horizontal lines emblazon the side of one of the queue-line walls, strikingly so against the concrete, in a continuing subtle nod to Helix being “3-Dimensional”. Interestingly, Helix’s name is written with the “E” formed the same way on all its branding.

Guests enter the station from below - ascending two sets of stairs. Whilst it is commonly regarded in this industry that it is better to enter the station from above or same level, on Helix it does actually work. It can be said this approach subconsciously creates a sense of climbing and height - due to the fact the first thing Helix does is drop out of the station. This in turn raises anticipation for the ride ahead. To add to the excitement, Helix’s initial drop is visible from the majority of the queue area - constant foreshadowing to the guests of the thrills to come. 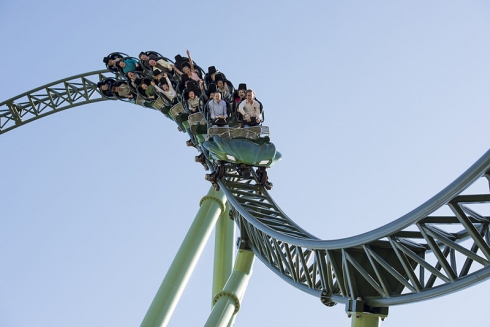 Helix appears to happily operate on its relatively busy periods - weekends and public holidays on 3 trains. The park claims Helix has a throughput of 1,350 riders per hour, despite having a smaller capacity per train (20) than most major coasters (28-32). However, it is still surprising when the queue moves at a good pace - probably down to a more cultural difference in that the FastPass ticket equivalent at Liseberg is rarely used. 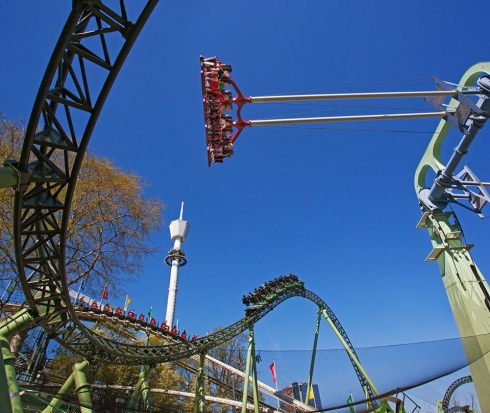 With seven inversions, two LSM launches, a maximum speed of 62mph, and maximum height of 135 feet, you can definitely expect Helix’s on-ride experience to be intense.

Helix’s inversions are all executed beautifully. The ride has two corkscrews, a zero-G roll, a Norwegian loop, an inverted top hat, and an inline twist to its name. Combined with the launches and three air-time hills, these inversions add a boost of excitement during the ride, and are well-placed during the circuit, allowing for maximum thrills from start to finish.

It has to be said that the feature setting Helix apart from other roller coasters is that it has truly constant speed. Even upon leaving the station, the track drops instantly and runs through a corkscrew before the first launch happens. The constant motion that Helix offers creates excitement that doesn’t just start as you peter over the first drop, or a few seconds after the station’s launch. You travel at a fast speed from the moment you roll out of the station to the moment you pull into the final brakes, and best of all, this speed lasts for 2 minutes and 10 seconds. 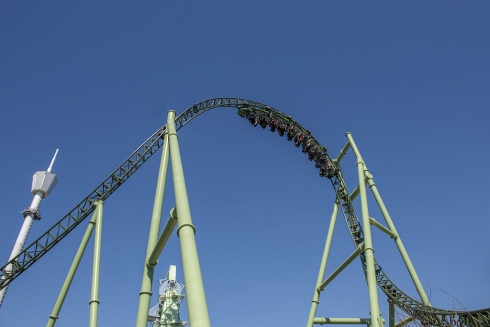 Another side of Helix that places it heads and shoulders above other seven-inverting roller coasters in the world, is that there are no shoulder restraints. The sensation of freedom you feel, as a rider, with raised seats works beautifully, and is arguably unmatched. The clam-shell lap restraint keeps you in your seat, but still gives you a feeling of vulnerability, especially as your feet hang freely too. This adds a boost of adrenaline that other multi-inversion rides lack; so much so that even the most experienced roller coaster enthusiast will notice.

An additional feature Helix greatly uses to its advantage is the fact that it is built on a hillside. The ride offers several breath-taking high points - giving you the occasional view of the surrounding countryside, cars, and city to remind you where you are; whilst rushing close to the hill, diving and twisting, and creating a real sensation of speed. Most coasters offer either a height experience or the other more intimate and interactive experience, but Helix beautifully ticks both boxes with its unique layout and hillside location.

Helix’s soundtrack was produced by the same company - IMAScore - as The Smiler at Alton Towers. Metallic, yet catchy and with sections of bass, Helix’s soundtrack definitely builds anticipation whilst waiting in the queue and in the station. If you’ve waited in line for The Smiler, and been subject to its catchy queue and area music, you’ll definitely notice the similarities to Helix’s. 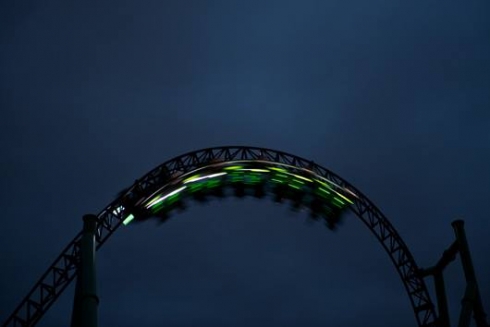 Helix is the only ride in Liseberg with an exit gift shop, sharing the space with the on-ride photo viewing area. It has to be said though, on the merchandise front, there are some alternative choices - instead of your typical magnets and keyrings, they opted for Helix branded watches, and two types of Helix umbrella, all in the lime green, black and white theming colours.

There is a strong social media theme to the merchandise - to the extent where the only Helix t-shirts available are either “#Helix” or “Like Helix". It's understandable Liseberg want to appeal to the teenage and young adult thrill-seeker market, but let’s be honest - a t-shirt that just has “Helix” on it would be perfect. 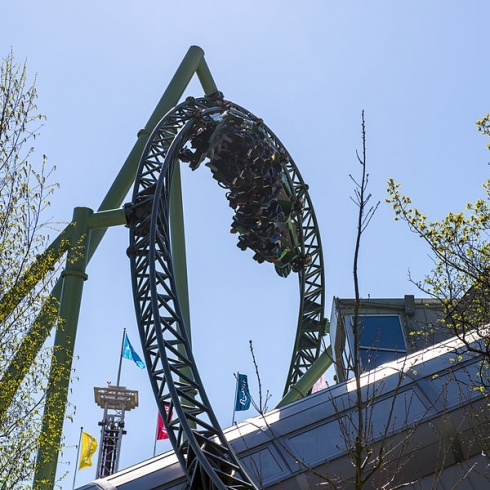 It’s quite a statement, but Helix is arguably one of the best rides the world has today. The fact that it is located in a Scandinavian amusement park, and reasonably hidden from the likes of the major European parks, makes undiscovered Helix even more exciting.

Liseberg may not be well known the world over, but they should be extremely proud of themselves, for having created a true game-changer on the thrill ride front. Helix hasn’t necessarily done anything that hasn’t been done before, but what Helix does is truly make the most of its location, the technology available, and surrounding environment, to be the absolute best ride it can be. B

y combining multiple exciting inversions, the high sense of freedom of a single lap restraint and no feet or shoulder contact; breath-taking high points hyper coasters would envy, yet keeping those close interactions with valleys, hillsides and other rides - all with non-stop speed from start to finish on 4,530 feet of silky smooth track, Liseberg has built itself a roller coaster that should be known all around the world.

Helix is a phenomenal ride experience, and hopefully in years to come, the Mack launch coaster in a mostly unheard of pay-per-ride amusement park in Sweden, will gain the iconic global status it truly deserves.