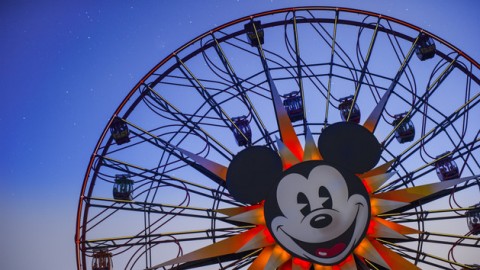 Not every castle can stand the test of time! Since the opening of Disneyland in 1955, parks have been identified by dominating structures often referred to as park icons. These structures come to represent a park’s stories and settings, and become synonymous with the parks they inhabit. From castles to “golf balls,” giant hats and lighthouses, we took a look at 11 of the worlds most awe-inspiring park icons just last month. But what happens when an icon falls?

Whether demoted, replaced, or never built, we’ve collected 9 park icons that just didn’t seem to make the grade for one reason or another. Which would you most like to have seen?

The Story: You’ve probably seen Spaceship Earth – the icon of Epcot. The 180 foot tall gleaming white geodesic sphere is an architectural marvel, and perfectly encapsulates the technological look and feel of the park’s Future World while also standing as a fitting tribute to the global World Showcase.

Announced in 1991, Disneyland’s second park, WestCOT would have taken all the best of Epcot and given it a decidedly West Coast spin. For one thing, the cold, silver, concrete Future World would come to California as a lush tropical realm full of waterfalls, gardens, forests, organic rockwork, and escalators through tiered levels. The cold, stark, white Spaceship Earth would do no good here. Enter Spacestation Earth. Nearly twice as large as Epcot’s, WestCOT’s icon would be a 300-foot tall geodesic sphere covered in beautiful gold isosceles triangles.

Why It’s Not An Icon: For one, WestCOT was never built... and ironically, Spacestation Earth might be part of the reason… The 300-foot sphere was a major sticking point for locals, already tired of Disneyland’s traffic and terrified at the idea of expansion into a resort. Technically speaking, the sphere would also be about five times as tall as Disneyland’s Sleeping Beauty Castle, which would probably distract from sightlines throughout Walt’s original park.

But Disney didn't give up! Instead, they reimagined the park's central icon to come up with something slightly less abrasive for local neighborhoods... 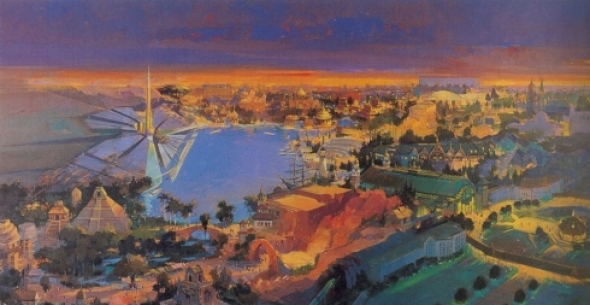 The Story: After locals and executives got nervous about the grandiose Spacestation Earth (and Disney got nervous about the park's $4 billion budget), they settled on a new, less overwhelming icon for WestCOT: a tall golden spire. In 1992, the revised plans were released, showing the new spire centrally located between the four corners of the globe the park sought to represent. 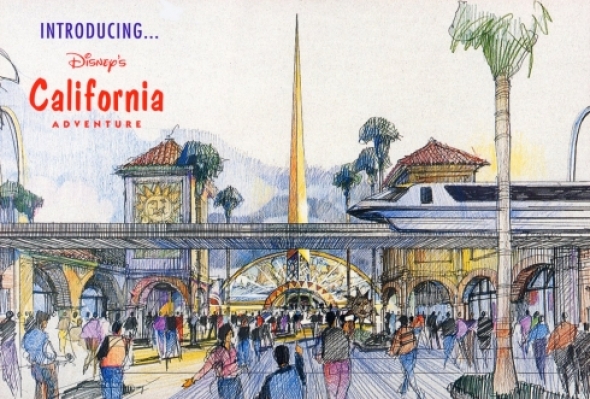 When plans for WestCOT were officially scrapped in 1995, the Spire didn’t die along with them. In fact, it was carried over to early designs for Disney’s California Adventure. Early on in planning for that park, the Spire remained the park’s icon, located just inside at what eventually became Sunshine Plaza. Here, though, the Spire was fashioned more as a singular prominent ray from a mosaic sun.

Why It’s Not An Icon: WestCOT never got built, and when Disney’s California Adventure opened in 2001, it had a much less impressive icon... 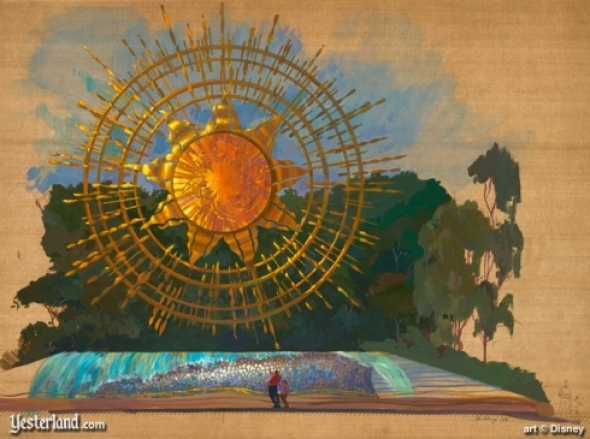 The Story: With a bland look and a name to match, the icon of Disney’s California Adventure when it opened was the unfortunate Sun Icon – known by most as “The Hubcap.” Indeed, this metallic representation of the sun was a noble effort, and when viewed from the “Postcard” perspective intended for the park’s entrance, it looked alright, rising above a comic Golden Gate Bridge. But the giant sun lacked the emotionally striking size, authenticity, and interest of other Disney Parks icons, and was certainly no sibling to Disneyland’s Sleeping Beauty Castle, which it faced.

The Sun Icon was intended to reflect real sunlight into the park’s Sunshine Plaza entrance land, bathing it in golden warmth. Unfortunately, the Sun Icon faced north and was permanently in shadow. The solution was to install massive telescoping mirrors around the plaza, meant to bounce the real sun onto the fake sun to bounce the fake sun onto the plaza. The effect didn’t work.

Why It’s Not An Icon: The Sun Icon was officially stripped of its duties early on in Disney California Adventure’s history, but it wasn’t removed from the park until 2010. That’s when the final push of Disney’s 5 year, $1.2 billion renovation project went into high gear. We told the in-depth story of the park's transformation in an in-depth entry, Declassified Disaster: Disney's California Adventure. In short, the Sun Icon and the Sunshine Plaza land around it were demolished to build the new, detailed, delightful Buena Vista Street. The spot formerly occupied by the Sun Icon is now home to the park’s new icon, the Carthay Circle Theatre – a truly “iconic” structure that’s finally a fitting compliment to Sleeping Beauty Castle.

4 & 5. The Chinese Theater and the Sorcerer's Hat 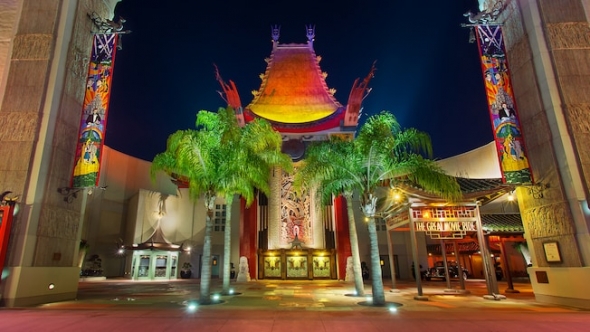 The Story: Opened with the Disney-MGM Studios park in 1989, the Chinese Theater is a thing of beauty. A faithful recreation (externally) of the famed TCL Chinese Theatre in Hollywood, Disney’s version even has very real celebrity handprints molded in the cement outside. The elaborately designed theater stands proudly at the end of the detailed Hollywood Blvd. that serves as the park’s “Main Street," making the Chinese Theater a clear and deserving companion to Cinderella Castle. The soaring Chinese Theatre helps complete the illusion of a very real Hollywood, California at the height of its Golden Age.

Inside, the theatre contained the Lost Legend: The Great Movie Ride, an epic, 25-minute dark ride through the movies that acted as the park’s “thesis” attraction, whisking guests through the greatest scenes in cinematic history. In other words, the Chinese Theater seemed certain to be the park's icon.

Why It’s Not An Icon: In 2001, Disney placed a 121-foot tall royal blue sorcerer’s hat in front of the Chinese Theatre, to serve as the icon and hub of the 100 Years of Magic promotion celebrating what would've been Walt Disney's 100th birthday. 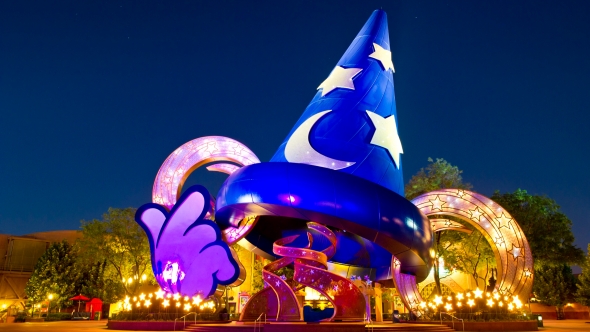 The hat – which became a target of hatred by Disney fans – was not necessarily awful on its own. It’s just that the incredibly realistic and highly detailed Hollywood Blvd. suddenly ended in a 100-foot tall anachronistic sparkling cartoon hat, literally hiding the incredible facade of the Chinese Theater. It was, in a word, absurd. And even when the 100 Years of Magic celebration ended in 2002, the hat remained. For 14 years, the Chinese Theater was covered by the gleaming royal blue hat.

To the delight of fans, the Sorcerer's Hat did finally disappear in January 2015, but even then, the Chinese Theatre didn't become the park's icon. Instead, the park has ben more-or-less icon-less since, with the Hollywood Tower Hotel standing in on merchandise.

And those aren't the only icons Disney's movie park has lost...