All-Star Roundtable: 5 Reasons Why Disney WON'T Change to Fend Off Competition in Orlando 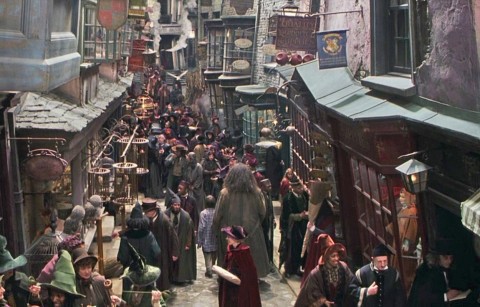 Disney may be the first and the biggest operator in the theme park space, but the company just may be heading into something of a precarious situation – at least in Orlando, where its Walt Disney World Resort now finds itself having to fend off ever-increasing competition from a whole slew of would-be rivals, both big and small.

Or does it? Is the Disney brand so strong and Walt Disney World so large that it can afford to sit back and take it easy for the foreseeable future? And, perhaps more importantly, should this be the best course of action for the planet’s most popular vacation destination?

It sounds like a topic best suited for a panel of Disney experts and theme park heavyweights:

Recently, Disney has been seeing competition from all corners of Orlando increase at an almost exponential rate: Universal, of course, has Harry Potter; SeaWorld is adding new water slides and dark rides (and thrill rides in Tampa); Legoland is aggressively going after the youth/family market; and Merlin’s dropping some $200 million on I-Drive 360.

So, what, if anything, needs to happen to keep Walt Disney World creatively competitive going forward?

1. MagicBands: “The entire $2 billion will be recovered just in $12 turkey legs that people are now buying on a whim” 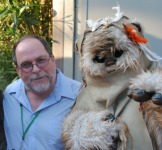 Look, the Orlando Sentinel ran a story back on April 19 of this year which said:

Disney World's share of Orlando theme-park traffic shrank from 74.9 percent in 2009, the year before the first Wizarding World debuted, to 71.3 percent in 2012, the most recent year for which figures are available. SeaWorld's share dropped from 9.1 percent to 7.9 percent. Universal's piece of the pie, meanwhile, grew from 16 percent to 20.8 percent during the same period.

Now please understand that, in a spreadsheet-driven business like themed entertainment, losing even 3.6% of your business in just three years’ time is a matter of concern. But at the same time, take a hard look at Disney's share of the Orlando tourism market – it's over three times the size of its nearest competitor. Disney is top dog in the Central Florida destination market by a huge, huge margin.

And even if Comcast said "Okay, Universal. You can open a Diagon Alley-sized new project every year for the next two decades," Disney would still be the destination resort that people would choose to spend the majority of their family vacation at if only for the nostalgia factor (i.e., "My parents took me there when I was a kid, which is why I'm gonna take my kids there").

That's why – I think – you're seeing Disney proceed with the initiative that they've done over the past few years. MyMagic+/My Disney Experience/MagicBands is – if you want to be perfectly blunt here – just an expansion/extension of the program that began with Disney's Magical Express. By that I mean Disney World tourism can't easily get off-property to go to Universal or SeaWorld if they don't have a rental car at their disposal.

Conversely, if you had locked-in ride times booked at the Magic Kingdom for that theme park's most popular attractions (not to mention a guaranteed primo viewing spot for the Festival of Fantasy parade and Wishes), there's just no way that you're bailing out of that Disney theme park that day to go see Shamu or Harry Potter. 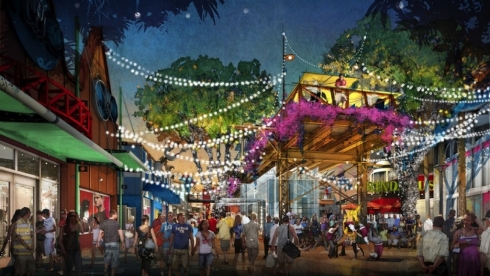 And that's kind of the same thinking behind the revamping/reimagining of Downtown Disney into Disney Springs. With a refreshed retail, dining, and entertainment district down at Lake Buena Vista which will eventually be (thanks to the road work which is being done along Lake Buena Vista Drive, as well as those two huge parking structures which are rising out of the ground) far easier to get in and get out off… Well, that means fewer people will head over to the Orlando Premium Outlet Mall and/or the Mall of Millenia to do their shopping.

So, if anything… I don't necessarily see Disney making a decision to move creatively forward. If anything, because management back in Burbank now sees WDW as a maturing business, the goal nowadays isn't necessarily reinvesting in the property, but, rather, making the most of what the company already has in Orlando.

Take, for example, the Four Seasons/Golden Oaks project. Given that golf is waning in popularity here in the US, it was relatively easy for the company to hand all of that Eagle Pines acreage over to real estate developers – all with the hope that the people who stay at that four-star hotel and/or live in that gated community will then go over to the Disney theme parks and spend money at the shops and restaurants.

Oh, sure – over the next few years, we'll see things as big as Pandora: The World of James Cameron's Avatar or as small as a new Frozen-themed sequence being added to Mickey's PhilharMagic all in an attempt to keep WDW theme parks somewhat fresh and relevant to would-be visitors. But, at the same time, you're also going to see things like Hamarabi Nights and that after-hours Epcot dessert party thing, which are all about finding new ways to pull additional revenues out of the resort's pre-existing assets.

Now, if you want to talk about places where Disney is genuinely moving creatively forward, take a look at what's going on over in Shanghai. In particular, look at how the Imagineers have turned Storybook Castle into this multi-purpose venue (i.e., it's home to a ride, a Bibbidi Bobbidi Boutique, a restaurant, and a walking tour, not to mention a fountain show out in the moat).

Disney's being innovative over there because – again, to be blunt – there's a feeling among Disney Company management that the American market is kind of tapped out. Whereas in China and/or Brazil, you've got a burgeoning middle class that’s in their late 20s/early 30s and which is just now having kids, and has some money to spare. So in those parts of the world, it's Anaheim in 1955 all over again.

Whereas in Central Florida, Disney's thinking is… Well, take, for example, MagicBands. In spite of the enormous cost over-runs on that project, do you know why Mouse House managers and Wall Street are still delighted with MagicBands? The huge up-tick in impulse purchases that they've seen. I had one Disney World exec joke to me at the Seven Dwarfs Mine Train that they expect to recover the entire $2 billion just in $12 turkey legs that people are now buying on a whim because waving your wrist for what you want right now doesn't quite hurt as much as reaching into your pocket and pulling your wallet out.

Sorry if this is seen as a downer by the other roundtable participants, but that's honestly where I see Disney World being creative these days. Not in the rides, shows, and attractions that they built at the Parks – but, rather, in the wide variety of ways that Mickey now slips that three-fingered hand into the guests' wallets.

Walt Disney World enjoys such dominant market share, backed by so much capacity and creativity in its parks and resorts, that it could coast for the next decade and still remain number one in the Orlando theme park market. So Disney doesn't need to do anything to remain competitive.

Of course, Disney didn't get to this level by playing passively. Avatar's coming in 2017, with additional stages for that land after that. Disney Springs is on its way. Once Shanghai's complete, I expect to see Star Wars Land go back to the front burner. Frozen eventually will get much more than an Anna and Elsa meet-and-greet, as Disney looks to use its immense Florida platform to support its hottest property.

As much as fans would love to see Disney adopt Universal's hyper-aggressive, new-big-thing-every-year development schedule, Disney World's a much more mature development than Universal Orlando; there's no need for it to move as quickly.

So while I expect Universal to continue growing faster than Disney and keep taking market share from Disney, Disney's attendance and income will continue to grow and it will retain its market leadership for many, many years to come.