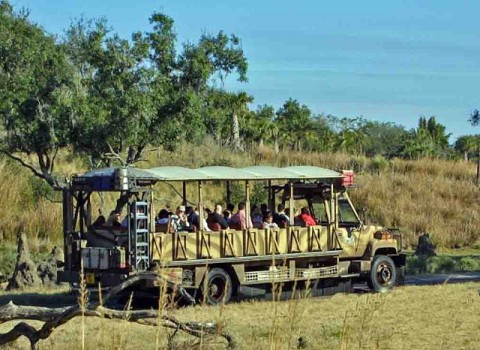 In many ways, working for Walt Disney World is just like working anywhere else. You worry about getting there on time, clock in for your shift, perform often-repetitive job duties, take a lunch, clock out, and head home. Yet Walt Disney created the modern theme park experience through a set of company-wide values that stood in sharp contrast to those of the dirty and dangerous amusement parks of his day. Today, those values are codified as the Four Keys to Guest Service: Safety, Courtesy, Show and Efficiency.

To provide an excellent and consistent Show element, Disney Cast Members receive a great deal of training and background information regarding their role in the Show. Whether a Cast Member is flipping hamburgers, sweeping the streets or selling merchandise, he or she is ultimately playing a role. The costume, props, accessories and even ways of greeting guests are carefully designed to enhance the believability of a particular themed land.

Attractions spielers are Cast Members who perform their role throughout a ride or show. They must memorize a lengthy script, known as a spiel, and deliver it to guests as part of the attraction. Like all attractions spielers, guides on Kilimanjaro Safaris at Disney's Animal Kingdom perform numerous land-based positions as well as driving and spieling on the trucks. The attraction employs more than 200 Cast Members, with roughly 85 working on any given day. The sheer size of the operation, coupled with the unpredictability of live animals, makes every day on the job a true adventure. Here are 6 ways that driving a safari truck is unlike a regular job. 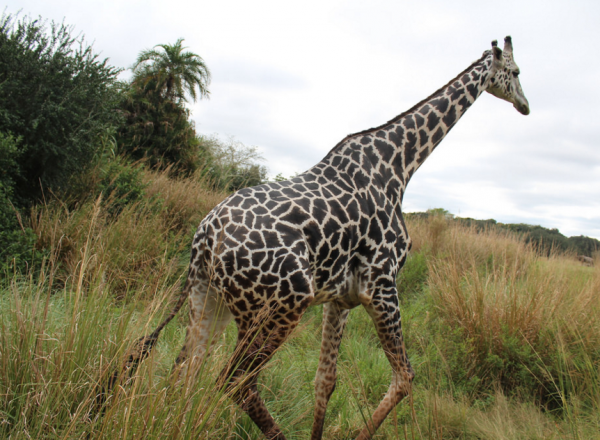 The predatory animals, such as cheetahs and lions, are kept away from the safari trucks through a carefully designed combination of natural and mechanical barriers. Gentler creatures, including giraffes and ostriches, are allowed to roam freely. When one stops in front of a truck, the entire line of vehicles grinds to a halt. If you happen to be in the front truck, this is a golden opportunity for photographs, as Safari guides are not normally allowed to stop. Further back in line, however, guides often scramble for something to say to cover the fact that you might be stopped for several minutes with absolutely no animals in sight.

Wildlife experts are called to move the animal along if it stays in the path for more than a few minutes, so you are not likely to miss your dinner reservations due to an errant giraffe. But next time you experience an animal stop, take a moment to put yourself in your guide’s shoes. Shop talk is common in many workplaces, but how many people’s stories center around being stuck waiting for an ostrich to move? 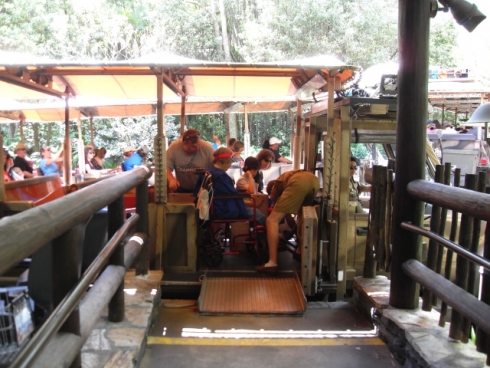 The wheelchair boarding dock is just one of dozens of positions at Kilimanjaro Safaris.

When you go to work, you probably have a pretty good idea what you will do all day. If a new project comes up, you probably receive a visit, an email or a phone call from your boss or team leader. With more than 80 employees coming in and out at various shift times, going to lunch or on break, and different trucks going on- and off-line depending on crowd levels and operational needs, it is simply impossible to pre-plan each Cast Member’s entire day. Likewise, it would be impossible to get personalized messages out to each person regarding what to do next.

Instead, Kilimanjaro Safaris employs a system that is affectionately known as “the Voice of God.” The team leaders sit in a small office connected to the massive cast break room. Cast Members are expected to be in the break room whenever they are not on a scheduled break or lunch. When the team leaders need a particular Cast Member to go to a specific land or truck position, they make an announcement over the loudspeaker. While imminently practical, the system can be quite disconcerting to newbies. You’re sitting on the couch watching TV when suddenly a booming disembodied voice announces, “Lisa. Go bump Pram Parking and send Jennifer to lunch.” You never argue with the Voice of God!